This acclaimed, classic-style western stars Kevin Kline, Kevin Costner, Scott Glenn, and Danny Glover as an unlikely band of cowboys out for revenge and justice. 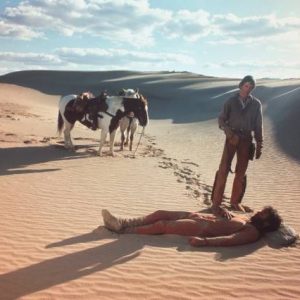 Trouble seems to follow, Jake, Paden, Emmett and Mal. Emmett is ambushed by three assailants and escapes after a gunfight. On the road, he comes upon Paden, left to die in the desert after being robbed. The two join up and ride to Turley where they discover Emmett’s brother in jail awaiting execution for killing a man in self-defense. Soon Paden is locked up, too. Emmett to the rescue! With the help of Mal, a black cowboy run out of town by the sleazy sheriff, played by John Cleese, they break the brothers out and the four head for Silverado, where they intend to go their separate ways. But, once again, trouble is waiting for them.

With Cobb, a corrupt sheriff on his payroll, and a gang of bandits on his side, Ethan McKendrick, a ruthless rancher runs the town, aiming to confiscate as much land as he can for his cattle, even if he has to resort to murder and kidnapping to persuade the owners to give up what is rightfully theirs. Only four men stand in his way—and each has a personal reason to free Silverado of the scoundrels and swindlers.

Action-packed with witty dialog, stunning landscapes, stampedes, gunfights and high-speed horseback chases, this entertaining story of loyalty, family, friendship and doing the right thing is an adventure the whole family will enjoy. So get ready to ride with Jake, Paden, Emmett and Mal as they reunite to fight for justice for their friends, families and themselves.

Halloween during a pandemic is going to be quite different, but you can still make it fun and pull off an unforgettable costume. INSP... READ MORE

Will You Ace this Quiz in Technicolor? She’s bold, independent, able to stand up to any man—even John Wayne. Yes, this maven’s... READ MORE