Audie Murphy stars! When notorious hired killer John Gant enters the tiny town of Lordsburg, Arizona, tensions start to flare. Townspeople with secrets begin to wonder if he’s there for them, and they start turning on each other. Will Gant kill his target – or will the paranoid citizens do it for him?

When John Gant rides into the tiny town of Lordsburg, Arizona, he needs no introduction. His reputation precedes him; everyone knows he is a hired gun. He doesn’t just come into town and shoot his victim dead; instead, he goads his target into reaching for his gun and then kills him in “self defense” and always with witnesses.

Many of the townspeople start to become fearful that, perhaps, they are the ones on Gant’s hit list. Everyone, it seems, has a secret in their past that could have made someone angry enough to hire Gant’s services.

“Respectable” businessmen, mine owners, lawmen and bartenders all begin to panic that Gant is really there for them. Soon, tensions begin to rise as the townspeople worry…and wait. 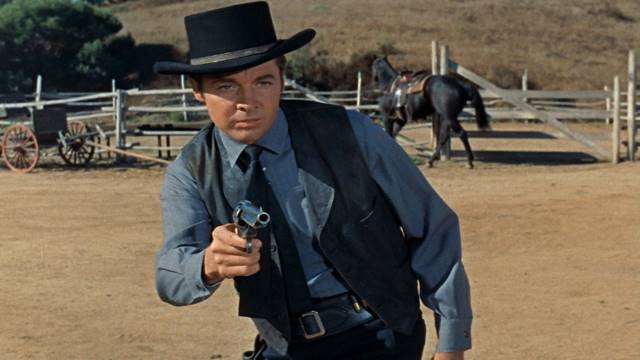 Meanwhile, the town blacksmith and doctor, Luke Canfield, is blissfully unaware of Gant’s past. He likes Gant and takes him on a tour of the town, even inviting him to his home for a game of chess.

Later that night, as Luke and his fiancée have dinner with her father, Judge Benson, and Luke’s father Asa, Sheriff Buck Hastings drops by to warn Luke about Gant. Asa tells Buck not to be so quick to condemn Gant, but the Sheriff can’t be convinced.

For his part, Gant quietly goes about his business. He says very little and does even less. When approached in the saloon by men who demand to know the real reason for his presence, Gant dryly observes, “No innocent man would be afraid.”

Now, the townspeople are more afraid than ever. Tensions rise and boil over…and blood is spilled.

Will Gant ever kill his intended target – or will the townspeople unwittingly do it for him?