John Russell was raised by Apaches – and is treated with contempt by his “respectable” fellow stagecoach passengers. But when vicious bandits strike, this “hombre” becomes their only hope for survival….

Originally raised by Apaches and then, later, by his white stepfather, John Russell doesn’t fit neatly into either world. When he grows up, he decides to live on the reservation with the Apaches.

However, when his stepfather dies, he returns to his hometown to see about the boardinghouse that was left to him. After a quick inspection, Russell decides to get rid of the house. So, he tells the landlady, Jessie, of his plans to sell it and move to Brisbee, Arizona…essentially leaving her and other boarders homeless. 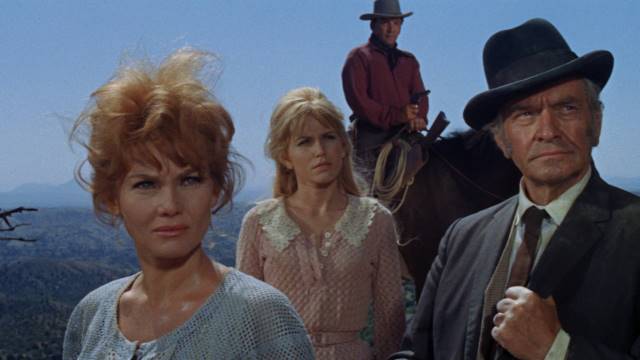 Since the railroad has come to town, stagecoaches have vanished. But Russell learns that a local stagecoach has been hired out for one last ride, so he buys a ticket to Brisbee. His fellow travelers include Henry, the stagecoach driver; government official Alex and his wife, Audra Favor; Billy Lee and Doris Blake; and Cicero Grimes, who bullies his way onto the stagecoach at the last minute.

After noticing a suspicious-looking gang, Henry decides to take the back roads to Brisbee. But, first, Alex Favor discovers Russell was raised as an Apache, and bigotry raises its ugly head. He asks Russell to ride up top with Henry, apart from “respectable” passengers.

On the road, bandits overtake them, and the group learns that Cicero Grimes is their leader! He instructs the thieves to rob Alex of a fortune—embezzled money meant for the Apaches—and kidnap his wife, Audra.

But before the bandits can get away, Russell kills two of them and gets the saddlebags filled with cash. Then, he leads the group back towards town through the mountains.

Now John Russell must decide: should he leave these people behind and run for his life … or stay and fight, like a good Hombre would?