Chance Buckman loves battling infernos, but it cost him his family years ago. Now, he’s reunited with his wife and daughter, and walks away from firefighting. But, if the world calls, will he stay or go – and watch his newfound happiness go up in flames?

Starring John Wayne, Vera Miles, Jim Hutton, and Katharine Ross. This action-adventure tale was inspired by the life of Red Adair, the heroic firefighter who battled oil field infernos around the world.

Chance Buckman is the firefighter the world calls when catastrophe strikes. He loves the danger and the thrills, but he also knows how much there is to lose. His wife, Madelyn, walked out on him a long time ago – taking their young daughter with her – because she couldn’t stand wondering if Chance would make it out of each fire alive. 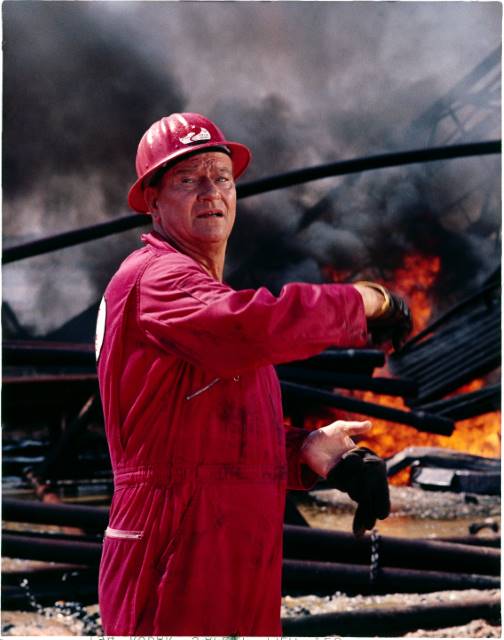 Although Chance still loves her, he cannot turn his back on his job. It’s one of the hottest, meanest jobs on earth, but he relishes the thrill of it as he travels around the world putting out massive fires caused by accidents, explosions, or terrorist attacks.

But everything suddenly changes when Chance gets injured in a near-fatal firefighting accident. Against his wishes, his former partner Jack Lomax sends Chance’s coworker, Greg Parker, to deliver Chance’s now-grown daughter to his bedside.

Unlike her mother, Tish Buckman is intrigued by her father’s line of work. So much so that she follows Greg Parker to a well fire in Louisiana…and after a whirlwind courtship, the pair marries just a few days later!

Seeing an opportunity to reunite with Madelyn, Chance takes a desk job and gives his firefighting company to his new son-in-law. Tish and Greg travel the world to fight fires while Chance and Madelyn settle into contented married life once more.

It’s only a matter of time until Chance grows bored with his desk job. He longs for the danger and adventure of his former job, but he doesn’t want to risk his marriage. Now, the question is: when the firefighting world cries out for Chance Buckman, will he lose everything to answer that call?