Audie Murphy stars! Lt. Jed Sayre is a friend to the Navajo and a fine Cavalry officer. When his new commander accuses the tribe of murder, Sayre sets out to prove the Navajo innocent – and thwart a plot to trick the Union forces and Navajo tribes into all-out war with each other!

Tensions threaten to take a deadly turn when Confederate agents attempt to incite war between Union forces and the Navajo nation. This beautifully filmed Western is captured in glorious Technicolor and features World War II hero Audie Murphy – a fan favorite – in a starring role.

Cavalry officer Lt. Jed Sayre is sympathetic to the plight of the Navajo in general, and is good friends with Menguito, the Navajo chief, in particular. He believes that treating the tribes fairly and working towards peace is in the best interests of the Union army – and is just the right thing to do. 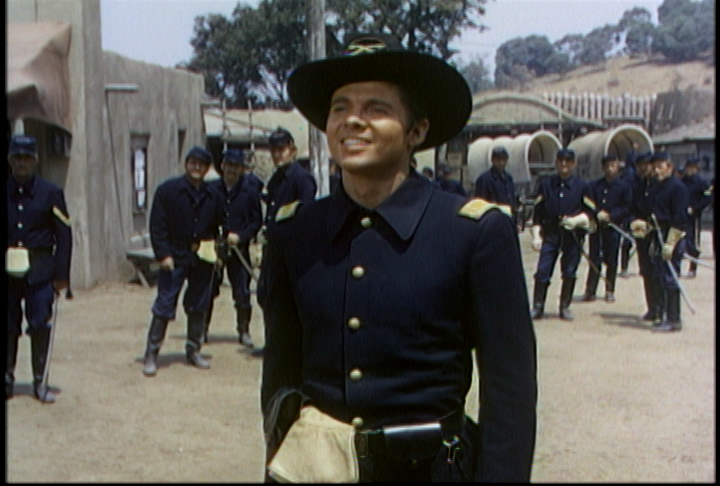 But while Sayre and Menguito work hard to maintain peace between the Union and the Navajo, other forces are working tirelessly to sow discord and push the two sides into a bloody conflict – and all-out war.

While the early conflicts of the Civil War begin to mount, Sayre discovers that his new commanding officer, Captain Whitlock, is purposely ratcheting up the tensions between the two sides. Whitlock states that the Navajo are responsible for the death of a prospector, and he uses his troops to get rid of them.

Jed begins to suspect that Whitlock is in league with Confederate supporters who wish to dispatch the Navajo tribes in order to gain possession of nearby territories. He knows that the Navajo are not in fact responsible for the prospector’s death and that the tribe is being wrongfully accused.

Now, Jed must fight the anti-Indian sentiments of his commanding officer, as well as, the growing North-South tensions within the ranks. But as hatred is inflamed on both sides and emotions spiral out of control, Jed wonders: can he prove the Navajos innocent before countless lives are lost?