Like most women of their era, Native American women cooked, tended to their homes and their children, and cared for the sick, among other domestic chores. But when the war pipe was smoked, many native women geared up for battle alongside their husbands—from leading horses to fighting fiercely, they were equal to their male counterparts, and sometimes even had an advantage.

Born in 1806, to the Gros Ventre Nation, Pine Leaf was captured by the Crow when she was about 10. A Crow warrior, who had lost his sons in battle took a liking to Pine Leaf and adopted her. Early on, Fallen Leaf showed talent in horsemanship and accuracy with her bow and arrow. Her foster parents, especially her father, encouraged her pursuit of these traditionally masculine activities, and he allowed her to guard the horses from predators—animal and human. 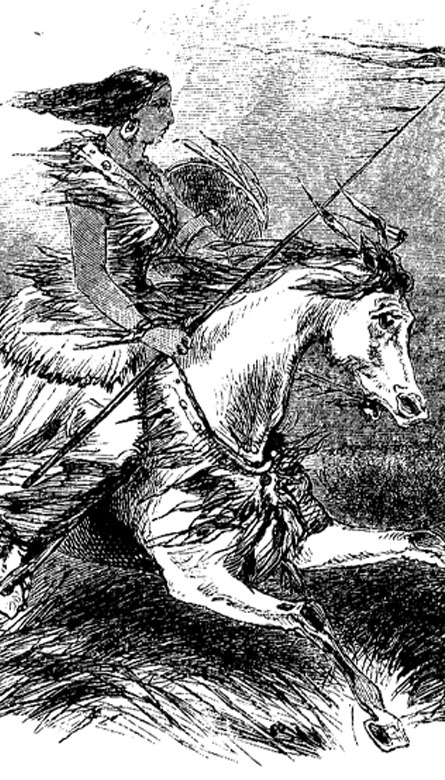 She learned to shoot and accompanied the men on hunts, where she excelled sometimes killing four or five buffalo in one run, butchering, and transporting her spoils home without any help. Soon her marksmanship would come to the test beyond the hunt. When a group of Blackfoot warriors attacked the camp, she quickly mounted up and led the charge against them, shooting one brave with her rifle, and taking down two others with her bow and arrows. Overwhelmed, the attackers fled. Her act of bravery earned her praise near and far. A year later, she formed her own band of warriors and retaliated against the Blackfoot, rounding up 70 horses for her tribe, killing two warriors, including a Chief, and stealing a gun from another warrior. She was named Woman Chief, was accepted by the Council of Chiefs, and became a tribal leader engaged in peace negotiations with neighboring tribes. Pine Leaf died in 1854 at age 48, when she was ambushed and killed by the Gros Ventres—warriors from her birth tribe. Though, much is lost to history, it’s believed that this is the warrior woman Jim Beckwourth writes about in his autobiography.

During the Battle of the Rosebud in 1876, against General George Crook’s troops and his Crow and Shoshoni sympathizers, the Sioux, and Cheyenne, led by Crazy Horse found themselves outgunned and in retreat. Then Chief Comes in Sight was shot and left on the ground, the battle raging around him. Seeing her brother fall from his horse stirred the warrior within Buffalo Calf Road Woman. She charged into the heat of the battle to carry her wounded brother to safety. Her bravery rallied the men to resume their fight with a fury. 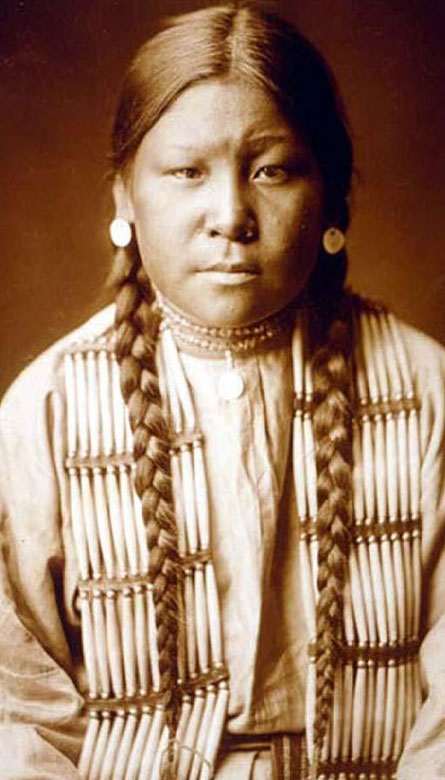 Eight days later, Buffalo Calf Road Woman rode into battle alongside her husband, Black Coyote, against the formidable and aggressive General George Custer at the Battle of Little Big Horn. The conflict became known as “Custer’s Last Stand.” Not one of the U.S. soldiers survived the brutal and bloody confrontation that took place that day. Without military eyewitnesses, accounts of the attack vary, as many attempted to reconstruct the devastating defeat by observing the aftermath on the battlefield.

But one story stands out. According to Cheyenne oral history, Buffalo Calf Road Woman fought as fiercely as the male warriors in the thick of the battle. It was she who knocked Custer off his horse with a club, leaving him vulnerable, leading to his death. Some say she even dealt him the final blow.  Buffalo Calf Road Woman died of diphtheria or malaria at around the age of 35, in May 1879.

Among other women warriors at the Battle of Little Big Horn was Arapaho Chief Pretty Nose. She survived the fight and lived to age 101. Her grandson served in the U.S. Marines during the Korean War and later followed in his grandmother’s footsteps as an Arapaho Chief.

As the Apache people were relocated to reservations, many chose to resist. Among them were the Warm Springs Apache, who under the leadership of warrior and chief, Victorio, escaped the San Carlos Reservation in 1877. At his side, rode his younger sister, Lozen, who was said to have special powers in warfare. It was highly unusual for an unmarried woman to enter battle. Lozen was the exception. She was fearless, imposing—and gifted. According to oral tradition, she was able to determine the location of Apache enemies by the intensity of tingling in her hands when she turned in their direction. Victorio described his beloved sister as “Strong as a man, braver than most, and cunning in strategy…” 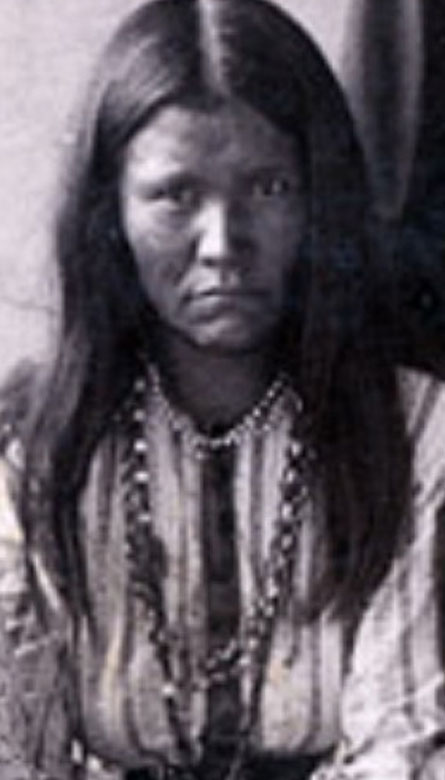 Lozen’s unusual gift served her people well, as Victorio and his band went on raids and fought American military forces to regain their land. But in 1880, while Lozen was away guiding an Apache mother and her newborn on a dangerous journey through hostile territory, Victorio attacked Mexican soldiers. He and most of his warriors were killed in the Battle of Tres Castillos.

Afterwards, Lozen joined Geronimo using her war, shaman, and seer skills in many a confrontation. In one battle she barreled headlong into combat to replenish their waning ammunition supply. Geronimo honored her and another female warrior, Dahteste, by sending them to negotiate with U.S. government officials on his behalf. When Geronimo surrendered, Lozen, now a prisoner of war, was confined to the barracks in Mount Vernon, Alabama, where she died of tuberculosis on June 17, 1889. She was about 49 years old.

Dahteste, was known for her beauty, sophistication, her fluency in English and Spanish—and her deadly skills on the battlefield. As a young woman, before joining Geronimo, she, her husband, and children rode with Cochise in Arizona. Like Lozen, she was a prisoner of war in Florida where she survived pneumonia and tuberculosis. After 27 years imprisonment, she was released to the Mescalero Apache Reservation in New Mexico. She died in 1955 at around age 95.

Gouyen became a living legend among the Apache for her courage and cunning in avenging her husband’s death. Gouyen was a young bride when she watched a Comanche Chief slaughter her husband and flaunt his kill. Though the odds were against her, Gouyen vowed vengeance. Without permission she sneaked out of camp and traveled at night to the Comanche village where victory celebrations were in full swing. Changing into a ceremonial dress, she slipped in among the dancers and sought out her husband’s murderer. The revelers were well drunk, at this point, and soon she set eyes on the chief, who still had her husband’s scalp hanging from his belt. Turning on her charm, she seduced him, and led him to a secluded area outside of camp where she brutally ended his life. Knowing the Comanche would be in hot pursuit, she stole the chief’s horse, and though sleep deprived, she rode flat out toward home, carrying trophies of her kill to present to her in-laws. Gouyen remarried Apache warrior, Kaytennae. She, her son, and infant daughter rode with him to the ill-fated battle of Tres Castillos where Lozen’s brother Chief Victorio lost his life. Gouyen, her husband and son were among the 17 Apache who survived that massacre. Her daughter did not. When Geronimo surrendered, Gouyen was taken into custody. She died at about age 46 in 1903 at Fort Sill in Oklahoma—still a prisoner of war.

Moving Robe Woman was no stranger to battle. At age 17, she took part in a war party against the Crow. In July 1876, now at about age 23, she was among the Sioux and Lakota who camped at the Greasy Grass (Little Big Horn). 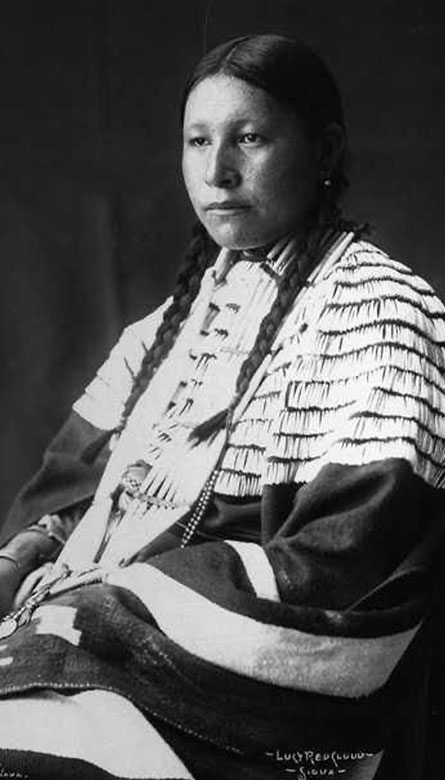 On this fateful day, she was digging turnips when a warrior rode by warning women to take their children to the hills. General Custer was about to attack. Moving Robe Woman raced back to her lodge where she learned that her brother, One Hawk, was killed in an earlier battle with Custer’s men. Now, in deep mourning and fueled by revenge, Moving Robe braided her hair, painted her face red, mounted her horse, and with her brother’s war staff in hand, galloped into battle. “I was a woman,” she reportedly said, “But I was not afraid.” Her determination emboldened the male warriors to fight ferociously for their way of life, in what would end up an overwhelming victory for the Native Americans. Custer’s entire cavalry, 268 men, himself included, were killed—at least one at the hands of Moving Robe. She may have gotten her vengeance, but it was bitter, and it came at a cost. She later said, “[No one] staged a victory dance that night. They were mourning their own dead.” Moving Robe Woman died in 1935 at Standing Rock Reservation in South Dakota. She was about 81 years old.

Born in southern Alberta, the oldest of five children, Running Eagle could hold her own among the boys, even as a young girl. Recognizing her bold, rough and tumble nature, Running Eagle’s father, a renowned warrior, taught her to ride, fight and shoot. Soon she accompanied him and the men on buffalo hunts. On one trip, their party was attacked by an enemy tribe. They started to flee but young Running Eagle saw her father’s horse shot out from under him. Knowing he would surely be killed; she spun her horse around and raced to her father’s aid. 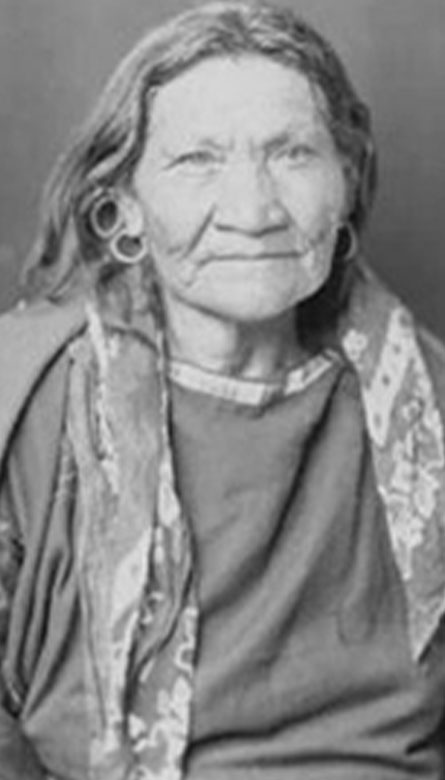 Despite the ruthless assault going on around her, Running Eagle pulled her father onto her horse and galloped to safety. She was hailed a hero, but not everyone was so accepting of this girl who dressed in boy’s clothes and could shoot and kill a buffalo on her own. After her parents died, it was even harder to prove herself worthy as a warrior. When a group of braves set out to raid a Crow camp to reclaim their stolen horses, Running Eagle took her father’s rifle and followed, but was ordered to return to camp. She refused and stood her ground against the party leader. Reluctantly, he conceded. On the raid, she not only captured 11 horses, but also shot two Crow who were up to no good, while the men rested and left her on watch. Over the years, she gained the tribe’s respect as she led several successful war parties and hunts. She was given the honor of sharing tales in the Medicine Lodge Ceremony and was admitted to the prestigious Braves Society of Young Warriors.

Running Eagle died on a horse raid after 1878. The Flathead warriors got wind that the war party advancing toward them was led by a woman and set their sights on taking her down. A warrior named Zamalya struck Running Eagle from behind with a club.