John Wayne is Chisum, a rancher who takes on a greedy and underhanded land developer bent on controlling the county, starting with Chisum’s land and livestock. 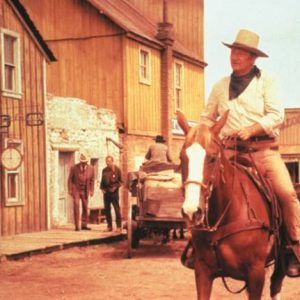 Chisum, an aging, kind-hearted, wealthy cattle baron, is destined to fight one more big battle of his life. He is the owner of the largest ranch, with the most livestock consisting of cows and horses, in Lincoln County, New Mexico, in the late 1870s. The Pecos River runs through his land, and being generous and a man of character, he doesn’t build a dam or sell the water rights to other ranchers. He allows the river to flow for everyone’s benefit.

Chisum’s land borders the ranch of his good friend Henry Tunstall, another upstanding gentleman who sees the good in people. In fact, one of his ranch hands is a young ruffian who wants to reform and live an honest life. Tunstall has taken him under his wing, serving as the boy’s mentor. That ranch hand is Billy the Kid, and little do Chisum and Tunstall know, soon they will need the Kid’s gunslinger skills.

Notorious businessman, L.G. Murphy will do anything to control Lincoln County and make a fortune on livestock sales and other trade, no matter if he earned any of it. He buys all the stores in town and jacks up the prices on merchandise. He takes over the bank and has a sheriff elected who will enforce his dirty deeds. Having put the squeeze on smaller ranchers, the only targets left for total control are the ranches owned by Chisum and Tunstall, and they’re not going down without a fight. They start by opening their own bank and general store, which soon come under attack by Murphy’s henchmen.

When gambler Pat Garrett is passing through the county, he hears about a plan by Murphy’s men to steal Chisum’s cattle before what will be a prosperous sale to the Army. Garrett warns Chisum’s ranch hands then agrees to hang around to fight Murphy. During their skirmishes with Murphy and his gang, Garrett and Billy the Kid become good friends.

Though Chisum has a dedicated band of men fighting Murphy’s corrupt, underhanded, and deadly schemes, the despicable businessman grows stronger and bolder. Fed up, Tunstall heads to Santa Fe to seek the help of Governor Sam Axtell. Along the way, Murphy’s men ambush him, and now the battle between the two forces becomes even fiercer, as Billy the Kid’s effort to reform turns to rage and revenge.

Chisum is one of the last truly classic Westerns, bringing to life iconic characters of America’s Western heritage. It’s filled with all the action you love, from gunfights to stampedes, true good guys battling unrepentant bad guys, and not to mention a hint of romance!

Maureen O’Hara: McLintock! Behind the magic between Maureen O’Hara and John Wayne’s on-screen chemistry is the real-life... READ MORE