Barbara Stanwyck – The Woman Who Would Be Victoria Barkley 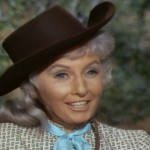 If Victoria Barkley is, arguably, the most memorable mother of Western fiction, it’s probably because actress Barbara Stanwyck had spent her lengthy and illustrious career preparing to play her. No other leading lady from the golden days of Hollywood was ever so identified with the ‘A’ Western as Stanwyck, born Ruby Stevens, July 16, 1907 in Brooklyn, New York. And from her very first, Annie Oakley (1935), as the sure-shot who fell for her male competition, she played women who were remarkably strong and independent, without ever losing her humor or girlish charm.

Long before she played widowed rancher Victoria Barkley, she’d played powerful cattle queens opposite Joel McCrea, Barry Sullivan, Edward G. Robinson, and future President Ronald Reagan. But while she played the great lady, she was a great lady who didn’t mind getting her hands dirty. 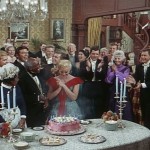 Kate Edelman, whose father Louis Edelman co-created and produced The Big Valley, recalls, “She was great on a horse. She had a bad back, but she did all her own stunts, as much as she could.”

Director Sam Fuller loved to tell about the time, while making Forty Guns (1957), when Stanwyck’s character was supposed to be dragged by a horse with one foot stuck in the stirrup. When none of the stuntmen were willing to do it without a way to free themselves, “Stanwyck volunteered to do the stunt herself, and be ‘shook-off’ naturally.” She did the drag three times!

When Bruce Dern or L.Q. Jones dared to stop a stagecoach with Victoria Barkley aboard, they didn’t know what they were in for! 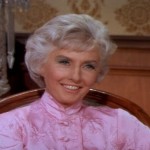 Actor Earl Holliman, who co-starred with her and Joel McCrea in Trooper Hook (1957), remembers, “She was down-to-earth. We were on location in Kanab, Utah. They didn’t have fancy digs in the desert. They had one table at lunch time. It was for the producer, director, actors. You know, she never sat at that table; never once. She’d get her tray, and go and sit on the ground, back against the wheel of some truck, surrounded by the crew, and that’s where she ate. They just loved her – she was adored by the crew. Everyone called her Missy.”

Trooper Hook was a daring movie for its time. Stanwyck played a woman rescued from Apaches, with a half-Apache son by the chief. When she won’t give up her child, she’s treated with scorn and contempt. This plot made quite an impression: she’d play the same story twice on Wagon Train, the second time playing the one who scorns ‘squaw’ Carolyn Jones. 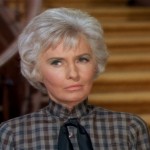 Kate recalls, “I met her for the first time when I walked into my parents’ living room, and she was sitting on the floor, feeding one of our dogs coffee out of an antique China cup. She was wonderful. On The Big Valley, the cast, the crew—she knew everybody’s name; she knew everybody’s child. If she had a call for seven, she would be on-set at 5:30.”

Taking on the role of mother, she expected professionalism from her TV family. Kate remembers a time when Lee Majors told her Stanwyck would scold him if he wasn’t prepared. “It taught him a great lesson in how he should conduct himself in his work,” Kate says. 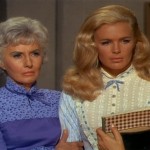 She also looked out for her brood. The producers cut corners by having Linda Evans wear the same costumes over and over.

“When they were picked up [for a second season], Barbara went to the producers and said, ‘Is this show a hit?’ They said, ‘Yeah.’ And she said, ‘Then my daughter would have new clothes. And while you’re at, she needs her own bathroom.’”

Henry C. Parke didn’t expect to be a Western specialist, but then, neither did fellow Brooklyn native Billy the Kid.  Parke has written “Henry’s Western Round-up,” the bi-monthly online report on Western film and TV production, for over six years, and for nearly a year has been Film Editor for True West Magazine.  He’s the first writer welcomed into the Western Writers of America strictly for his work in electronic media.  A screenwriter, his credits include Speedtrap (1977) and Double Cross (1994), and he’s got a saddle-bag full of Western scripts.