In 1878, Cheyenne tribes, forced to live on a harsh reservation in Oklahoma, defiantly flee to their ancestral Wyoming homelands. Now, the U.S. Cavalry is hot on their trail…

Richard Widmark, James Stewart, and Edward G. Robinson star! This epic Western tells the true story of the Northern Cheyenne Exodus in 1878-79. Filmed in Monument Valley, Arizona, and filled with spectacular scenery, this movie was hailed as an elegy for Native Americans—and was the last Western directed by John Ford.

In the 1870s, the Cheyenne tribes are taken from their ancestral homes in Wyoming and sent to a barren and inhospitable reservation in faraway Oklahoma. Forced to live in desperate conditions, the group—who originally numbered over 1,000—is beset by starvation and disease. One year later, fewer than 300 of them survived. 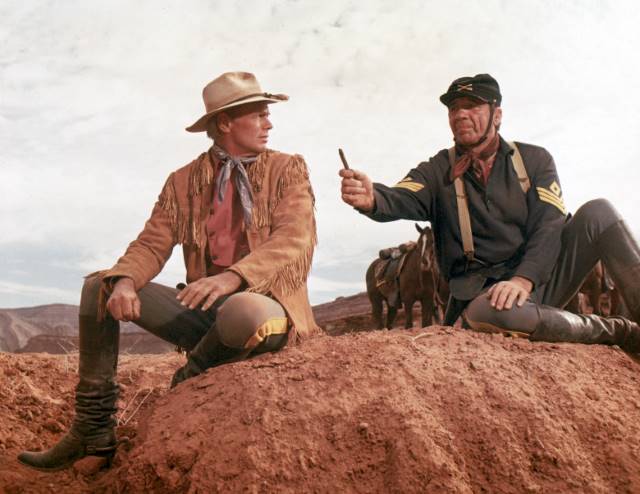 Now convinced that the Federal aid they were counting on will never arrive, the survivors decide to make the 1,500-mile journey back to Wyoming, where the hunting is plentiful, and life was good. They are accompanied by Deborah Wright, a Quaker missionary who is sympathetic to their plight.

Hot on their trail is Captain Thomas Archer, a reluctant cavalry officer, who is tasked with bringing them back—and who also just happens to be engaged to Deborah. Thomas has no ill will against the Cheyenne, and he loves Deborah…so he hopes to come to a peaceful resolution with no blood spilled.

However, those hopes are dashed when a hotheaded Cheyenne brave named Red Shirt starts several fights with U.S. soldiers…and several of the soldiers are killed. The press reports on this and labels the Cheyenne as “marauding savages.” Now, the public begins to fear for their safety—and demand their capture.

There’s a long way to go if the Cheyenne are going to make it back to their homelands. Now, with winter bearing down on them hard and fast, the question is: should they continue on this journey, or surrender once and for all?

How Christmas Memories Are Made We love a great Christmas surprise. But no surprise here: INSP viewers have a lot of heart! From... READ MORE