Audie Murphy stars! Former lawman Logan Keliher straps on his guns to catch a bank robber who was once his friend – and is the ex-husband of his wife and father of the son he claims as his own!

Once upon a time, Logan Keliher was a Texas Ranger and a brother in arms with Sam Ward. But then, they left the force and their lives went in two very different directions. Sam became a bank robber and went to jail for murder – and Logan became a rancher, married Sam’s ex-wife, and brought up their son as his own.

Angry and jealous, Sam breaks out of jail, gathers together a posse, and heads to Logan’s town to rob a bank and then murder Logan for his betrayal. But Sam’s plans are foiled when the robbers bust in – and Logan just happens to be there. 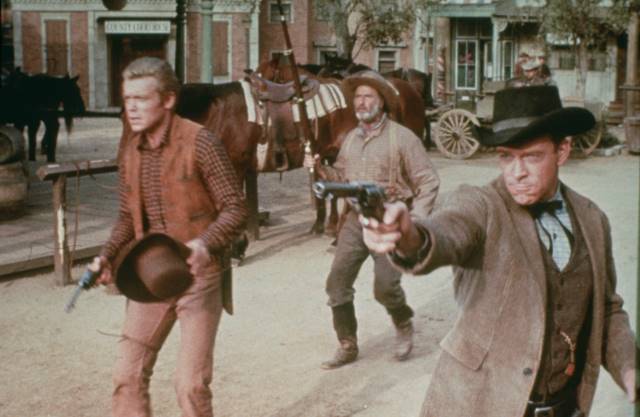 The bullets fly, and none of the robbers in Sam’s posse survives. Despite being wounded, Sam runs away…and heads directly to the Keliher ranch. When he finds his ex-wife, Susan, Sam promises her this: that he will come back to kill Logan.

When Logan returns home and his wife tells him this news, he decides he must act. He heads into the desert to search for Sam and meets up with a posse that is also searching for him. Using what he knows of Sam’s methods, Logan finds Sam in hiding with Lottie, a widow of one of the bank robbers.

But Logan will have none of it. He’s determined to bring Sam back – very much alive – to see that justice is served. He intends to drag Sam all the way back to town with his hands tied. But when Apaches attack, he frees Sam so they both can fight.

The question now is: do they have what it takes to survive the angry Apaches, the greedy posse – and each other?