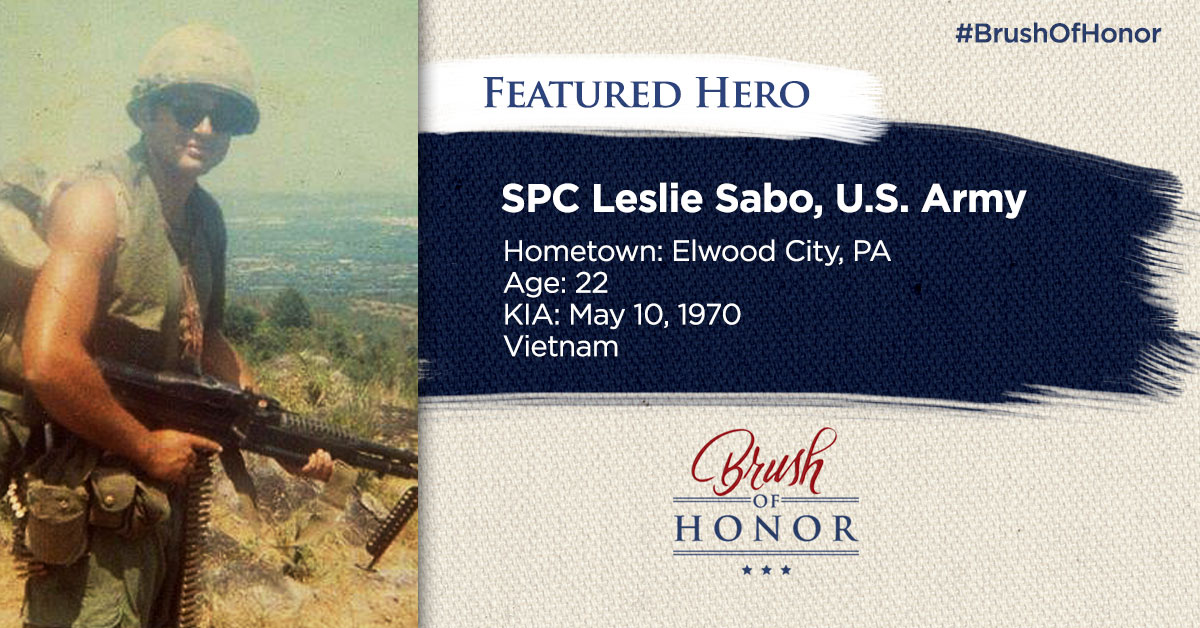 Leslie Sabo, Jr. served as a rifleman in Company B, 3rd Battalion, 506th Infantry, 101st Airborne Division. On May 10 1970, Leslie was killed in battle in Se San, Cambodia during the Vietnam War. He was 22 years old.

Leslie H. Sabo Jr.’s parents, Elizabeth and Leslie H. Sr., fled Hungary during World War II when the Red Army and the communists occupied their native country. They took their young son, George, and escaped to Austria where Leslie was born. In 1949, when Leslie Sr. realized that the Soviets would be permanently installing themselves in Hungary, the family immigrated to the United States.

The family settled in Pennsylvania in 1955. Throughout Leslie’s youth, his father stressed the importance of discipline and patriotism.

“Our father instilled in us the pride of being an American,” his brother has said.

In 1966, Leslie graduated from high school. Shortly after that he met Rose Mary. Rose Mary said she had fallen in love with him the day she met him at a high school football game.

In April 1969, Leslie was drafted into the Army. Leslie trained at Fort Benning, Georgia.

While on leave in September, he married Rose Mary, and they honeymooned in New York City. In November 1969, Leslie and his unit deployed to Vietnam.

Leslie’s first few months in Vietnam were a constant battle from vicious enemy fighters and oppressive weather. On May 5, 1970, Leslie’s platoon embarked on a mission into Cambodia. On May 10, hundreds of Vietnamese Army soldiers, hiding in the jungle, ambushed Leslie’s platoon, and their comrades in a second platoon. The American soldiers fought heroically. Leslie put himself in harm’s way protecting his fellow soldiers on numerous occasions: charging the enemy position and killing enemy fighters; attracting enemy fire to draw fire away from his comrades; sprinting across an open field to gather ammunition; shielding a wounded comrade to protect him from a grenade blast and absorbing the brunt of the blast himself; and single-handedly attacking an enemy bunker, while being fired upon, with a grenade that killed the enemy and silenced his own life. Comrades witnessed Leslie put up an adrenaline‐fueled fight until he took his last breath.

The Sabo Family received the Medal of Honor for Leslie’s actions, 42 years after his death, from President Barack Obama on May 16 2012, the month that began to mark the 50th anniversary of the Vietnam War. The President recognized the members of Bravo Company of the 101st Airborne Division who fought with Leslie.

Obama addressed the veterans, “You served with honor. You made us proud. And here today—as I think Les would have wanted it—I’d ask the members of Bravo Company to stand and accept the gratitude of our nation.”