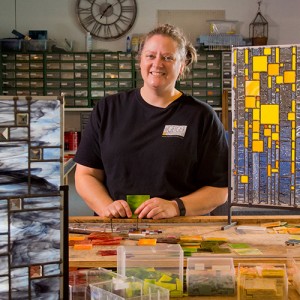 When she sets out to create one of her colorful, geometric stained glass “landscape mosaics,” Josephine A. Geiger finds inspiration everywhere, some sources, to the average eye, may even seem boring. Geiger can look at a photo or other image, and see it as it might look in stained glass.

Though her work can be labeled “abstract,” Geiger crafts each piece from traditional leaded stained glass and, occasionally, copper. Her work is comprised almost totally of rectangles and squares, but the viewer is still able to picture the underlying scene by the lines, details and movement of the pieces. She uses no patterns or mathematical calculations to create her work, just one idea leading to another giving life and spirit to each stained glass work of art.

Her work appears in galleries across the country, and commissioned pieces are installed in several collections, including Hudson Hospital – Healing Arts collection (2010 & 2011), Regina Medical Assisted Living Facility (2009 & 2011), City of Middleton Arts Council – Municipal Court and Police Station (2010), among others. 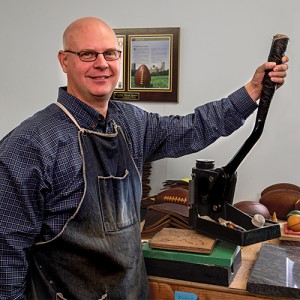 Raised in Cooperstown, New York, baseball was in Paul Cunningham’s blood. Indeed, his family lived so close to the National Baseball Hall of Fame, on summer breaks from Drew University, a young Cunningham worked as a researcher in the museum. Ironically, it would be a football that changed the course of Cunningham’s life.

Cunningham went on to a successful career, working as a photo editor for Major League Baseball, but at home, he honed his skills as a leather craftsman. In 2006, he started a part-time business hand-making vintage cross-stitched baseballs he named Lemon Balls. Then he took the plunge, quitting his prestigious job after 13 years for what many might consider a hobby. The baseballs were selling well, but the income wasn’t going to support a young family. Then he hit a home run—on a different field of play. Wanting to create a football to fit his own hand, Cunningham crafted a meticulously-balanced, lighter-weight, easy-to-grip ball, and the first of his Leather Head footballs made its debut, and sales took off.

Today Leather Head Sports, his company located in Glen Rock, New Jersey, still has a hometown feel, and at its core is made up of people who love sports. Cunningham’s custom-made baseballs, basketballs, footballs, rugby balls, medicine balls, baseball gloves and other equipment feature a rugged, vintage feel—collectors’ items that are not only functional, but beg to be used. On his website, Cunningham writes, “At Leather Head Sports we believe that the love of play is universal…. In a connected, modern world, we want to remind folks that the best memories of sports are from when we were young, and our sporting goods were made to last.” 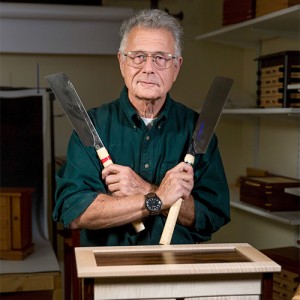 Wood’n It Be Nice, Mukwonago, WI

Bob Dickey has always been fascinated by wood, and started working in the medium for practical reasons—to make the things he couldn’t afford to buy, from furniture to kitchen cabinets to home additions!

Today, in his Mukwonago, Wisconsin studio, he focuses his efforts on jewelry and keepsake boxes, handcrafted from domestic and exotic hardwoods from the US, Central and South America, and Africa. Just like the painter who combines colors on a palette, Dickey’s palette is the wood itself, as he admires the range of color, texture and patterns found in woods. He also considers the wood’s malleability when creating his jewelry and keepsake boxes that are both beautiful and functional. Dickey avoids using stains or dyes, except on rare occasions for special effects. He prefers to allow the wood color to speak for itself.

He continues to create several original designs, including his Pagoda Box, which has been featured nationally. Though he has designs that he returns to, each piece of wood is unique, so each finished product takes on its own personality and uniqueness. In addition, more and more of his work is commissioned, where he works with clients to create a piece that meets their personal aesthetic and practical needs, and allows him to use his artisan skills to “think outside of the box” to create a one-of-a-kind box. Dickey is a member of the Wisconsin Designer Craft Council.