Ruggedly handsome, muscular, and tall (as a striking 6’2″), the silver-haired Wilson loved playing Bill Hawks. “Hawks is my identity with the public, not Wilson,” Terry once told a journalist. “I’m proud of Hawks, proud to be thought of as Hawks, and it will be a sad day when Hawks is no more—like losing a part of me.”

His joint personal appearances with best friend Frank McGrath, who played cook Charlie Wooster on the series, drew thousands of fans to rodeos, state fairs, and other personal appearances across North America over the years. And as his fame—and the job offers—faded after the beloved series was canceled, Wilson remained grateful for the opportunity to be a full-time actor on Wagon Train. 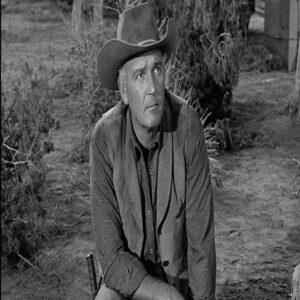 When Maryellen later remarried, Bill Newman and his stepfather, Dr. William R. Wilson, bonded over their mutual love of horses. Bill so loved his stepfather that he viewed Dr. Wilson as his real father figure, and ultimately took his last name.

The Wilson family moved to Trinity County, California, where Bill Wilson would grow up in the shadow of “The Trinity Alps.” But tragically, Bill’s idyllic boyhood ended when Dr. Wilson died of a cerebral hemorrhage in 1939, when Bill was 16 years old. It was at this time that Bill, his mother, and his two young half-sisters returned to southern California.

As a North Hollywood High School varsity football player, Bill received a football scholarship to Cal Poly. After his first year at the university, though, Bill joined the Marine Corps in 1943, fighting in the Pacific Theater Battles of Saipan and Okinawa. When the 24-year-old returned to southern California in 1946, rather than return to his studies, he sought a job that required his athleticism and that would pay him for riding horses. “Working as a stuntman looked like easy money to me,” he later recalled. “I was okay on all my riding stunts, but it took me six months of training to learn how to fake fights.”

Eventually, Terry would become an expert fight man, horse stuntman, and horse teamster. His low-key, professional demeanor and ability to work with difficult directors made Terry much in-demand. And with this stellar reputation, he would go on to double many Hollywood stars, including superstar John Wayne.

Terry worked for John Ford for the first time in Ford’s final cavalry trilogy movie, Rio Grande.  He was a Ford Stock Company regular, as well as Bond’s double, and he informally served as lieutenant to stunt coordinator Cliff Lyons in both Ford and Wayne films.

Bond convinced Terry and McGrath to join him when he was offered the role as Wagonmaster Major Seth Adams on Wagon Train. The trio’s real-life friendship provided the foundation for the Wagon Train regulars. Previously, Terry often delivered lines here and there as a stuntman. With time, Ward’s coaching turned him into a fine, naturalistic actor who owned the part. Nevertheless, Terry continued to do most of his own stuntwork on Wagon Train, except when the producers wouldn’t let him execute dangerous stunts, because the shooting schedule couldn’t afford to lose him if something went drastically wrong.

Meanwhile, the easy-going and quiet Terry was popular around the studio, treating everyone he met with kindness and respect. One of his co-stars described him as “a gentle giant.”

When Bond unexpectedly passed away in November 1960, Duke Wayne delivered the eulogy at Bond’s funeral, with Terry making follow-up remarks. “He was a father to me. He wore himself [out] doing things for others,” Terry subsequently recalled. 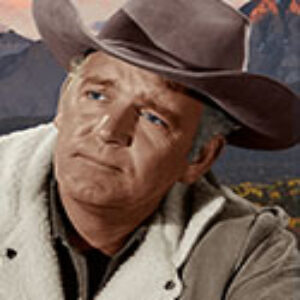 fans demanded that Hawks be promoted to Wagonmaster. Yet Terry was relieved when John McIntire was hired as new Wagonmaster Chris Hale, since Terry feared stardom would infringe on his family’s privacy.

Terry was married to Mary Ann Kramer, an attractive, vivacious ice-skating performer in movies as well as in revues starring skating star Sonja Henie. He was particularly proud of being an exemplary family man, a devoted husband, and a father of three children.

After Wagon Train ended its long voyage, Terry told his fan club, “I think that switch to 90 minutes [episodes] was one of the things that lost us a lot of viewers … We had been on for eight years, and they wanted something different, I guess.”

At this point, Terry no longer earned a steady paycheck as an actor because Westerns had begun to erode in popularity. Terry found himself typecast as a Western actor, although he had previously worked in nearly all genres as a stuntman in more than 200 films and TV shows. While he was a popular guest star of Universal Studios Theme Park’s Wild West Stunt Show, Terry refused to return to stuntwork. He continued acting in small parts until he eventually switched to real estate project development. His dream project was to develop a dude ranch on the old Getty Ranch in Simi Valley, California. Instead, the ranch would become the Big Sky Movie Ranch, where Terry held the dual titles of location shoots manager, and customer relations manager.

Eventually, health-related problems forced Terry to retire. He would grow progressively weaker from health-related illnesses during his final two years, and he died at home on March 30, 1999. Mary Ann Wilson wrote in a letter to one of Terry’s colleagues that her husband “just didn’t have the strength to carry on. He died of congestive heart failure in bed.”

The “gentle giant” always remained grateful and sentimental that he “got this chance in television and it lasted so long” playing Bill Hawks on Wagon Train. “I’m Bill Hawks on the show and off,” Terry once told an interviewer. “I like horses, riding, am handy with rifles and guns, find comfort wearing Levi’s and denim shirts, and love to hunt and fish. Playing this part is as easy as eating breakfast.”