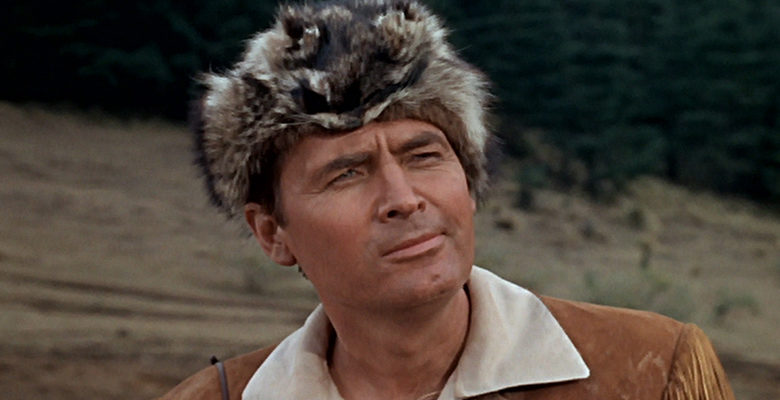 In every major screen role that Fess Parker ever took on, he was the ideal American male and father, and he was idolized as such. If you didn’t grow up in the 1950s or ‘60s, you may find it hard to grasp just how popular Texas-born actor Fess Parker was. The day after the 1955 Emmy Awards, Gregg Gobel, son of TV comedian ‘Lonesome’ George Gobel, went to school and remembers, “I was punched by nearly every kid in the school. Dad had won ‘Most Outstanding New Personality,’ and everyone wanted Fess Parker to win it for Davy Crockett.”

Before becoming an actor, Fess Parker studied history and theater on the G.I. Bill. He’d served in World War II, but it wasn’t easy. He’d joined the Navy, hoping to be a bomber pilot, but at 6’6”, he was too tall for that, or pretty much any job on a plane, and finally transferred to the Marines, becoming a radio operator in the South Pacific.

In Hollywood after 1950, he did off-camera voice work in Harvey (1950), and bit parts, until Walt Disney gave him his big break. Walt was looking for an actor to portray Davy Crockett. He watched a horror movie, 1954’s Them!, to check out the lead, James Arness, but was instead impressed with Fess Parker, who had a single but dramatic scene as a pilot in a mental ward who claims his plane was downed by flying saucers flown by giant ants. The performance is remarkable: he delivers his loopy dialogue with the absolute conviction that would become his trademark. Walt Disney signed him, and when the first of five Davy Crockett episodes aired, the world was swept with raccoon-cap mania.

Just like the real Crockett, Fess’ frontiersman was fierce, smart and country-sophisticated, self-reliant, sincere, patriotic, and helpful to others. The real Fess shared those virtues. When he was studying drama at the University of Texas at Austin, his classmates included Jayne Mansfield, Rip Torn, L.Q. Jones, and Morgan Woodward. Morgan, whose steely visage would make him Gunsmoke’s most frequent guest star, had yet to get cast in a film. “Disney was getting ready to do The Great Locomotive Chase. So Fess told Disney he knew this guy who would be just absolutely great as this wild-eyed Confederate Master Sergeant. So that’s how I got my ‘in’, and I was signed to a three-picture contract.”

Under contract to Disney, Fess also ‘starred’ in Westward Ho, The Wagons!, Old Yeller, and The Light in the Forest, but oddly, only in supporting parts. And Fess lost out on plum roles because Walt wouldn’t loan him out; Jeffrey Hunter got to star opposite John Wayne in John Ford’s The Searchers, and Don Murray earned an Oscar nomination for playing Bo (and beau) to Marilyn Monroe in Bus Stop. When Walt suspended Fess for refusing a five-page role in Tonka, both men decided they needed ‘elbow room’ and parted ways.

After a few features, and playing the James Stewart role in a series based on Mr. Smith Goes to Washington, Fess was happy when NBC offered him the lead in the series Daniel Boone, a role with many similarities to Davy Crockett. In fact, years later Fess would recall, “I always worried about whether or not it would be accepted. Same guy, same hat. Different name, different family.”

Actor Darby Hinton remembers well when, at five and a half, he was cast as Boone’s son due to a fortuitous mistake. He was actually at 20th Century Fox to audition for the youngest Von Trapp child in The Sound of Music (which later became a female role), “So dressed in lederhosen and knee socks I ran into the casting building, but went into the wrong office and ended up in the final callbacks for Israel Boone (originally an older character). The secretary took one look at me and took me ahead of all the other kids. I think it was just to give a comic relief to everybody inside; Fess, the producers, and (director) George Marshall. We just started laughing and we got along so well that Fess said they wanted to use me even though they didn’t have a part for me. Halfway through the pilot they got rid of the older brother and moved me up to Israel.”

It was ideal timing for Darby. “Because I had lost my own father when I was only about 14 months old. My mom wanted to keep me in the business because she thought there’d be a lot of good male influence there. She was worried being a single mom, and I only had two older sisters. Fess was always a great father figure.”

“Daniel to Israel, he was always giving me great advice,” Darby recalls. “He was one of those guys that was such a great role model, you just wanted to be like him. So, he didn’t have to tell you much. You’d just follow him around and do what he does.” He led by example. When Fess passed away in 2010, Darby remembers what TV Tarzan Ron Ely said in his eulogy. “He came onto the set and he couldn’t believe it was a working set, because there were no dramas, no yelling. It was just very calm and that certainly came from Fess. You did your job, you were professional, you had fun, and focused on making the show the best it could be.”

And, decades before anyone was talking about inclusion, Fess made sure Daniel Boone practiced it. “We had Rafer Johnson. We brought Rosey Grier in as a regular. He loved the diversity; he loved to show those values on the show without hitting you over the head with it, to bring up slavery, and talk about the Indians and how you should treat people. You know, Rebecca (Daniel’s wife, played by Patricia Blair) was supposed to be an indentured servant. It wasn’t just people of color, it was also the Irish.”After 165 episodes, Daniel Boone stopped production in 1970, and after a TV movie and an unsold pilot, Fess gave up acting to focus on building a resort and a world-class winery in Santa Barbara, California. He was a great success at both.

He was also a real father, of son Eli and daughter Ashley. “And I think he did a fabulous job with his own kids,” says Darby, who got to know them during set visits. “You know, growing up in this town, some of the kids from influential families don’t always turn out great. But, Ashley and Eli are wonderful people with great values and I love them like a brother and sister. Eli went from sweeping the floors of his vineyard to becoming Winemaker of the Year. And Ashley is one of their best spokespersons; she travels the country for Fess Parker Wine, and runs The Bubble Shack,” the winery’s champagne club.

Darby Hinton, who is also a father, and a good one, has two new Westerns coming out, Bill Tilghman and the Outlaws, in which he plays Cole Younger, and a Faith-Based Western, Wild Faith. His new book, Growing Up ‘Israel’ – My Life in Pictures, is available at darbyhinton.com.

Henry C. Parke didn’t expect to be a Western specialist, but then, neither did fellow Brooklyn native Billy the Kid. Parke has written “Henry’s Western Round-up,” the on-line report on Western film and TV production, since 2010, and is the Film Editor for True West Magazine. He’s the first writer welcomed into the Western Writers of America strictly for his work in electronic media. He’s done audio commentary on numerous Spaghetti Western Bluray releases. A screenwriter, his credits include Speedtrap (1977) and Double Cross (1994), and he’s got a saddle-bag full of Western scripts.