Though many know Earl Hamner as the voice of the older, more mature John-Boy heard at the beginning of every episode of The Waltons, Hamner’s ties to the much-loved series go deeper. In fact, they go down to its very roots. As the creator and writer of the show, he based the characters of the Walton family members, neighbors, tradespeople and the town itself on his own life and family growing up in Schuyler, Virginia during the Depression era.

“My mother and father were very much as I have portrayed them,” he says, “My mother was very religiously oriented. But my father was a self-confessed heathen. And yet they had a wonderful marriage, there was a great deal of love between them.”

Schuyler was a company town. Most of the residents rented small houses from the soapstone quarry where they were employed, including Hamner’s father, a gruff, but loving man whose home-spun wisdom far exceeded his classroom education.

“My father only went to school up until the second grade then he had to start work to help support his family. My grandfather had infantile paralysis, so my father had to help the family. He was rough-hewn but he was wise, and I use this in one of the episodes,” Hamner says, “When I left home, my father felt he had to give me a ‘son and father’ lecture. So he took me aside, and he said, and these are his very words, ‘Son, when you’re away from here, look every man straight in the eye, pay all debts, and don’t run with bad women.’ That was my father.”

Though his parents did not have the opportunity to pursue higher education, they took school very seriously.

“My mother was a little better educated. She had graduated from high school, and she used to help each of us with our homework. We sat around the kitchen table, and each kid did their homework, and she helped them. She said later because of eight children, she had been to high school eight times!” Hamner laughs at the memory.

In addition to the Walton characters, other roles, such as the “recipe-making” Baldwin sisters and General Store owner, Ike Godsey were also inspired by real people. The Baldwin sisters were loosely based on a mother-daughter duo that was well-known in Hamner’s family because “they had a love of alcohol.” Hamner changed the relationship, gave them sweet personalities and made them a bit loftier and more elegant than their down-home, real-life counterparts.

“But there were two ladies who were bootleggers, but being a writer, I romanticized them considerably.”

A clerk at a store down the road from the Hamner home gave life to the character of Ike Godsey. The store, though rebuilt after a fire destroyed it in the early 90s still pays homage to the series that made it famous.

Hamner says, “It’s a little filling station that also supplies groceries and things to local folks. They have a big sign outside saying, ‘Ike Godsey’s country store.’ It’s become a tourist stop. People often go by there. And they usually end up having an ice cream cone and soft drinks. I’m happy because it brings some income to the area.”

Another fan attraction to Schuyler, Virginia is Walton’s Mountain Museum, housed in the high school from which Hamner graduated. According to their website, they host as many as 90,000 guests in a year from 50 states and 20 foreign countries. So Hamner’s hopes for bringing income to his home town seem to be coming true.

For many who watched The Waltons during its original run and, now on INSP, the Walton family represented family life based on love, values and morals with a good deal of humor and compassion. Even in the face of dire economic times, the family and community supported each other through hardship, disappointment and tragedy and joined together to celebrate the happy occasions, the triumphs, no matter how small.

Hamner says the atmosphere on the set was exactly like that of one big extended family. He tells the story of the child actors and a certain grandmother.

“They thought of themselves as brothers and sisters, and I’ll never forget Ellen Corby, the grandmother, who off-camera was grandma, as well. I remember her very well shouting to one of the children, ‘Stop that running on the set! You’re gonna fall over a cable and kill yourself!’”

He and the cast have built close personal relationships over the years. They keep in touch and reunite regularly for fan events and special occasions such as weddings and births. The most recent gathering, however, was a sad one, as they attended the memorial service for Ralph Waite, who played John Walton, Sr. Hamner felt a kinship with Waite. They were friends, and they touched each other’s lives on more levels than just that of actor and writer.

“He was a very deep man, a very gifted actor. Actors have the ability to give you great gifts, and Ralph’s gift to me was his image of my father.”

Hamner goes on to say that Waite was able to grasp his father’s rough-hewn quality and simultaneously imbue the character of John Walton, Sr. with sensitivity, allowing him to love and guide his family and to support his wife. 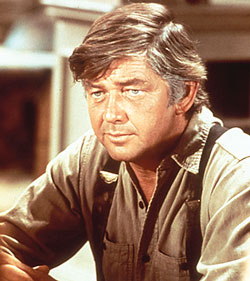 “Ralph was able to portray a man he never met, but with such sympathy and yet with restraint…He was human, and I think Ralph projected that quality so beautifully.”

With Waite’s death memories of another deeply-felt loss resurfaced for Hamner.

“We were friends as well as actors, and when he died,” Hamner says, “I felt, in a way, that my father…” He pauses briefly, “I had lost my father again.”

While Waite gave Hamner the gift of seeing his father in the character of John Walton, Sr., Hamner, in turn, gave his father and a loving family to people worldwide with “The Waltons.” At 90, he still writes every day and is currently working on a stage version of his book, Spencer’s Mountain.

Earl Hamner lived through some of the hardest times this country has known. He pursued his passion and achieved a successful Hollywood career, yet there are no airs about him. He speaks eloquently, with humility, from the heart, the words of a writer.

“I had such a good life. “With the exception of the loss of friends and family, I’ve had no real sadness, and I’ve been an affirmative person. I think if I had any great contribution to [The Waltons] it has been an affirmative, loving positive approach to life.”