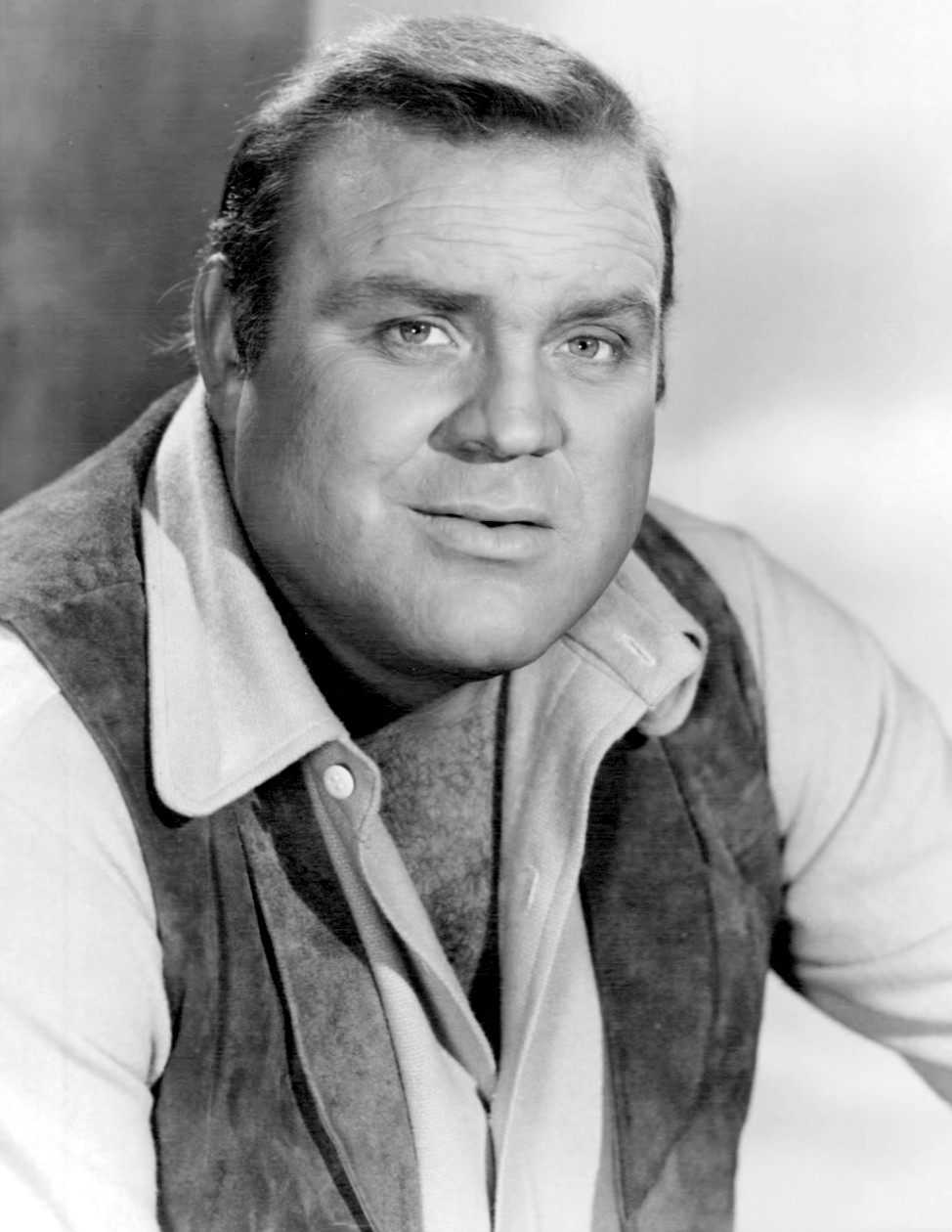 Little Joe might steal your heart with charm, humor and good looks, but it was Hoss, the big, shy, gullible and loveable Cartwright brother who would sweep you away with his humility, innocence and puppy-dog sincerity.

Weighing 14 pounds at birth, on December 10, 1928 in the town of DeKalb, Bobby Dan Davis Blocker still holds the record as the largest baby born in Bowie County, Texas. So, in a way, the beloved actor we know as Dan Blocker started life surrounded by an aura of fame.

When Dan was young, his parents, Ora “Shack” Blocker and Mary Arizona Blocker moved to O’Donnell, Texas, about 40 miles south of Lubbock, where former farmer, Shack, as he was called, managed to scrounge together enough money to open a grocery store, after losing everything after the Great Depression. In the early years, the family lived in quarters at the back of the store and young Dan helped out, carrying groceries to customers’ cars, among other tasks. According to one source, his father used to kid around with friends, saying he would pay them to hire Dan, that because of the boy’s size, he was wrecking the store! But his size would soon prove to be an advantage.

At age 13, Dan enrolled in the Texas Military Institute where he was a linebacker on their football team. His skills on the gridiron earned him a scholarship to Sul Ross State University where he was to play football and study English. At age 18, he stood 6’3” and weighed nearly 300 pounds. He would grow another inch and gain a good deal more weight as he matured to adulthood.

His size and athletic prowess may have gotten him a chance at an education, but now it was going to change the course of his life in a way he’d never imagined. At one point, the drama club was staging Arsenic and Old Lace, and they needed a stage hand strong enough to move the heavy dummies used for “dead bodies” in the production, and Dan fit the bill. He fit it so well, in fact, they convinced him to play the small role of Teddy Brewster, the delusional nephew of the murderous, spinster aunts—the protagonists in the play. Once he got a taste of being in the spotlight, the audience response, the feel of the stage, Dan was hooked. He changed his major from English to Theater. After graduation, he reportedly turned down offers to play pro football, and instead, headed east to pursue his acting career on stage, performing in summer stock, repertory theater shows, and eventually landing a small role in a Broadway production of King Lear.

Then Uncle Sam came calling, and Dan went off to fight in the Korean War, where he served with distinction, earning a Purple Heart, among several other medals, citations and awards. In 1952, the same year he was discharged from the U.S. Army, having attained the rank of Sergeant, he married Dolphia Parker, whom he’d met as a student at college. Now, married, he chose a “responsible” path in life. Dan returned to college and received a Master’s Degree in Dramatic Arts. After graduation, with a young family to provide for (Dan and Dolphia would eventually have four children: twin daughters, Debra Lee and Danna Lynn; and two boys, David and Dirk), Dan took a job as a high school English and Drama teacher in Sonora, Texas and later taught sixth grade in New Mexico. It seemed as if each move, as a teacher, was taking Dan west, closer to his destiny.

Dan settled into married life. He loved teaching and enjoyed being around children. He shared his passion for acting and language, perhaps touching the lives of the kids he taught in ways he might never know. By all accounts, he had a heart of gold. Though occasionally quick-tempered, he was also quick to apologize, and admit when he was wrong. When he moved his family to California, it wasn’t because he sought stardom and the adoration of millions of fans. He went to study for his PhD in Dramatic Arts at UCLA, while he continued to teach.

To help make ends meet, in the mid-50s, Dan began auditioning for television roles, and was cast in bit parts in Westerns, which were popular, at the time. This rekindled his love of acting, transforming into different characters. He appeared in several hit series, among them: Gunsmoke, The Rifleman, Have Gun Will Travel, and Maverick, in which he was given the chance to display his gift for comedy. He had a recurring role in the short-lived series, Cimarron City in 1958. The cancellation of that show might have seemed like a blow, at the time, but soon he would realize, it was a gift. Because then he was available to take the role of a lifetime.

Any actor trying to break into Hollywood would have given anything to be in Dan’s boots, but it wasn’t until David Dortort nabbed him for the role of Hoss Cartwright on Bonanza, did Dan finally set aside his doctoral studies to become a full-time actor—and mainly because the role was time consuming and demanding, and there was little time for study.

If Little Joe was the heartthrob of Bonanza, Hoss was the heartbeat…and the very soul of the series. The middle son of wealthy Nevada widower and rancher, Ben Cartwright, Hoss was not known for his intelligence, unlike the actor who portrayed him. He was awkward and shy around women. He was easy to fall for a prank. But Dan brought to life a character filled with love and compassion, and Hoss was a favorite of viewers, especially the younger audience who could relate to his love for children. Indeed, Hoss was somewhat childlike himself. One trait Dan and Hoss had in common was a strong desire to fight for social justice.

Dan played the beloved character of Hoss motivated by this quote by the 18th century, French-born, American Quaker missionary, Stephen Grellet: “We shall pass this way on Earth but once, if there is any kindness we can show, or good act we can do, let us do it now, for we will never pass this way again.”

During his years on the set, Dan became good friends with Lorne Greene and Michael Landon. His TV family was just like real family. They were together from 7 a.m. to 9 p.m., five days a week during the season, and often socialized off the set. Dan was best man at Michael Landon’s wedding to Lynn Noe.

Though the shooting schedule of Bonanza took up most of his time, Dan did manage to appear in several movies, most notably, Come Blow Your Horn and Lady in Cement both with Frank Sinatra.

Dan had long moved his parents to California to be closer to him, but the little town of O’Donnell didn’t forget their adopted son. His stardom on Bonanza made him the darling of his friends and neighbors back in O’Donnell, Texas. They had a good laugh remembering the studious young boy, whose nose was usually in a book, now on the back of a horse, galloping into their living rooms every Sunday night.

On May 13, 1972, Dan entered a Los Angeles hospital for simple gall bladder surgery. Nobody could have anticipated anything but a successful recovery and a return to another successful season of Bonanza, but a blood clot in his lung changed everything. Dan Blocker died, leaving behind a grieving wife and four children, a devastated cast, especially best friends Michael Landon and Lorne Greene, and a stunned nation. Dan Blocker was just 43, and at the peak of his career.

His Memory Lives On

Today, the grocery store where Dan swept floors, stocked shelves and carried bags out for customers is boarded up, but the name “Blocker” still exists in bold letters, and a large yellow silhouette of a ten-gallon cowboy hat is painted where the entrance would be. A room in the O’Donnell Heritage Museum is dedicated to Hoss memorabilia, and nearby, a small lot in Courtyard Square has been converted to a memorial garden featuring a monument dedicated to the memory of Dan in the form of a life-size bust, created by sculptor, Glenna Goodacre. The commissioned portrait was installed in 1973.

In life, Dan was an ordinary guy, a family man who doted on his children, loved his wife, and was loyal to his friends. He worked hard, and stood up for his beliefs. He was dedicated to the craft of acting, but, a realist, he also knew he needed to provide for Dolphia and their children.

He was a star living in Hollywood, but he didn’t live an ostentatious life—not even in death. He’s buried in an unassuming grave, in a plain family plot in Woodmen Cemetery in DeKalb, Texas. The family marker reads simply: Blocker. His in-ground stone is relatively small and could easily be missed in the surrounding patches of grass and dried earth.