Audie Murphy stars! Jim Harvey is a good wagon train guide. But when his wagon train is wiped out by Yaqui Indians – and he survives – he’s accused of desertion! Now, he must restore his good name, but only with help from an odd source: a horse named Tumbleweed.

A wagon train guide is wrongly accused and must clear his name in this action-packed Western!

While riding across the desert, Jim Harvey comes upon a young Yaqui Indian named Tigre who has been shot by a white man. Jim stops and takes the time to help Tigre and tend to his wounds. In return, Tigre warns Jim to get out of the area because his father, Aguila, is a fierce Yaqui warrior that will arrive soon. 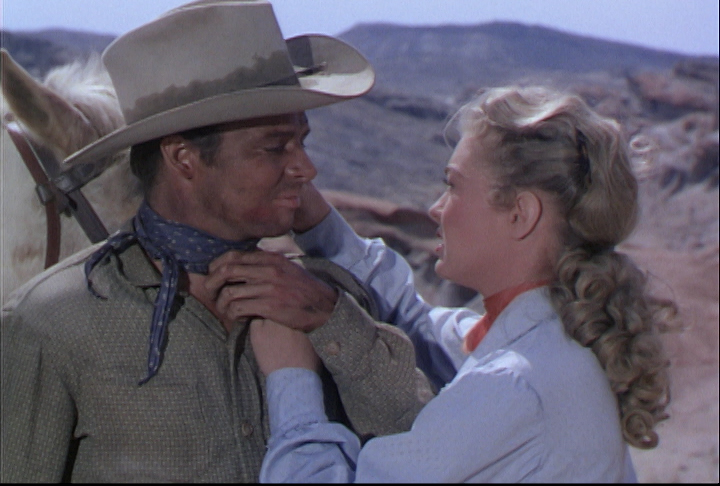 Later, near the town of Mile High, Jim takes on a job as a guide and a guard for the Blandon family’s wagon train as it makes its way west to Borax. While on a scouting mission, Jim notices a smoke signal and rushes back to the wagons, instructing two women to hide in the cliff’s nearby shelter.

Despite his best intentions, the Yaqui Indians find the wagon train. Jim tries to negotiate with Aquila, telling him how he saved Tigre’s life. But Aquila does not believe him, and he ties Jim to a stake in the ground and leaves him to die in the hot blazing sun.

Luckily, Tigre’s grateful mother sets Jim free. Jim rushes to Borax and learns that most of the Blandon family, except for the two women he left hiding in the cliffs, have been killed!

Now, the townspeople accuse Jim of cowardice and desertion. Fearing that the angry townspeople will lynch him, the Sheriff puts him in jail for his own safety.

Later, Tigre breaks him out of jail and saves him. Tigre tells Jim that a white man told Aguila about the wagon train. But before he can say more, Tigre is shot and killed and, Jim is wounded.

Running for his life, Jim arrives at the Buckley ranch, searching for a horse to steal. Instead, the Buckleys help him before he collapses. When he comes to, they give him an odd-looking horse named Tumbleweed, and he sets out.

They say that Tumbleweed is “the best horse” on the ranch, but does he have what it takes to help Jim survive?