Audie Murphy stars as himself in this gripping war drama based on his experiences fighting in World War II in Europe. From his early life, to his battlefield heroism, to earning The Congressional Medal of Honor, Murphy shares his most private memories while paying homage to his fellow soldiers.

Starring Audie Murphy playing himself in the gripping story of his real-life experiences fighting in World War II, his heroic acts that led to his triumphant return as the most decorated soldier of the war, earning among other honors, The Congressional Medal of Honor.

Having already starred in 15 films, the Universal Studios opted to create a movie depicting Audie Murphy’s bravery during World War II, based on his autobiography, and starring the iconic Western actor. At first, Murphy resisted playing himself, hoping they would offer the role to Tony Curtis. A humble man, his intent for the movie was not to boost his own ego, or boast about his heroism, but to honor the men he served with. When he finally gave in to the pressure of studio execs and friends, he made sure he consulted on just about every aspect of production, from the accuracy of the soldiers’ uniforms, to special effects in reproducing authentic battle scenes, to paint colors on the sets. 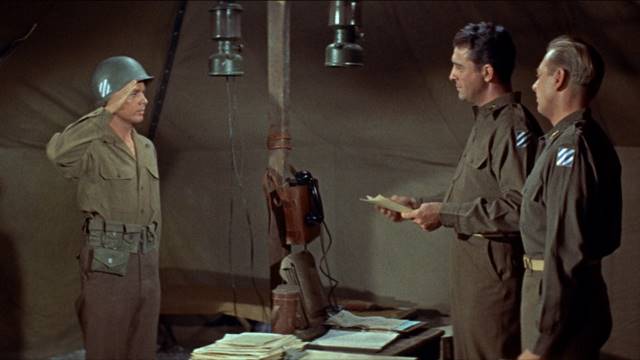 The film reveals not only Murphy’s valor in combat, but also story of his impoverished upbringing. At age ten, his father abandons the family, and Murphy steps in, working odd jobs and hunting to support and feed his mother and eleven siblings on their dirt-poor sharecropper farm. When his beloved mother dies, and World War II is on the brink of erupting, a neighboring farmer suggests he enlist in the military to make a living.

To Hell and Back portrays not only Murphy’s leadership and heroic acts at an incredibly young age and the harsh realities of war, but also delves into the bond among the soldiers, and how in a certain-death situation, like when he was a boy, Murphy steps up. He defies death to singlehandedly save his men.

Having suffered his whole life from, what is now known as, PTSD, it could not have been easy for Murphy to relive his war experiences for the big screen. In airing this film, INSP pays tribute to all veterans.