A gripping story of deceit, greed, passion, and ultimately, triumph and love!

Josh Parrish fought for the Union in The Civil War, and suffered greatly from battle wounds. For the past several years, he’s been recuperating, living a peaceful life on his ranch. Now, his doctor pronounces him fully recovered, and Josh is ready to sell the land and start a new life back east with his fiancée, Caroline Vail.

Neighboring rancher and cattle baron, Lew Wilkison of Anchor Ranch is all too happy to take the property off Josh’s hands, adding it to his expanding empire. In fact, his henchmen, led by his brother Cole have often used unsavory tactics to “persuade” small ranchers to sell to Lew. One day, Josh witnesses Wade Matlock, one of Lew’s men gun down the sheriff. Though it unsettles him, Josh still meets with Lew and Cole, who’s running Anchor, to negotiate the terms of the sale. Cole knows Josh wants out and he offers him a price way under the value of the land and gives Josh 24 hours to make up his mind. Josh balks, and Lew threatens him, saying it’s useless for him and the other ranchers to hold out. Meanwhile, Caroline pressures Josh to consider his future with her. 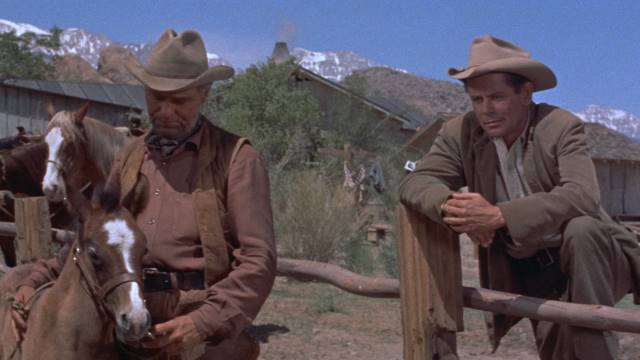 Then word gets to Josh that Cole and Lew’s men are on their way to shake down another hold out rancher, Hank Perdue. Josh and his crew take off to defend Hank, but along the way, Josh finds his own ranch hand, Bud Hinkleman, shot and near death at the hands of Wade Matlock.

When Josh’s men, hot for revenge, want to confront Wade and Lew’s henchmen, Josh order them back to the ranch. Instead, this avowed pacifist, takes his dead ranch hand’s gun and faces off with Wade, killing him.

Back at Anchor, Martha, Lew’s wife is in love with Cole, and fears Lew will evict him from their home. With cunning, she convinces Lew to give Cole free rein to obtain the remaining ranchers’ land. Vicious to the core, Cole now has a mission, and he won’t stop until it’s complete, and first on the agenda is to burn down Josh’s ranch.

Now, this Civil War veteran is about to enter a whole new kind of battle, one of betrayal, secret affairs, switched allegiances, unlikely love, and a fresh, new start he never expected.

Which Wayne Wore It?

The Duke Steps Into the Fashion Spotlight From a loner gunslinger to a strong-willed lieutenant, John Wayne brought to life so many... READ MORE

Pearl Hart: Heart of Steel She was born Pearl Taylor in 1871 to wealthy, educated and religious parents in Canada. So how did this... READ MORE