Clint Eastwood stars! A farmer-turned-outlaw vows to avenge his family after Union soldiers kill them. With a bounty on his head and enemies closing in, Josey wonders: will he ever find peace again?

Josey Wales wasn’t always an outlaw. Once upon a time, he was just a hardworking farmer and family man. But in one tragic encounter with Union troops, Wales lost it all as his wife and son were killed and his Missouri home destroyed during the Civil War.

With a blazing fire in his heart and a fierce determination guiding his every move, Josey Wales sets out to avenge his family. He starts by joining a pro-Confederate group in Missouri that attacks Union supporters and troops. 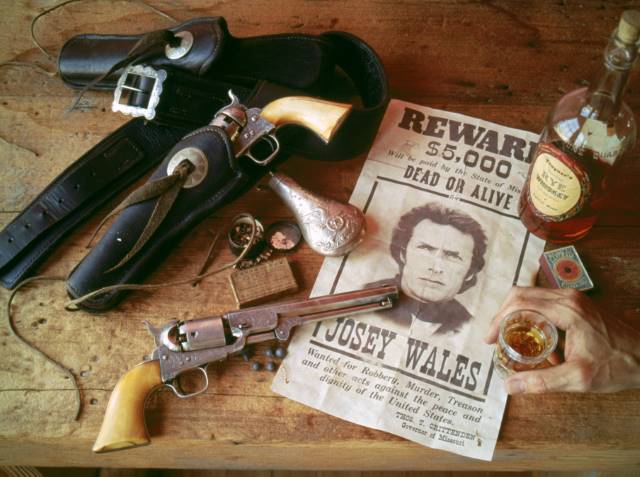 But when the war ends and his group is ordered to turn over its weapons, he refuses—and watches as his fellow soldiers get gunned down by the same Kansas brigade of Redlegs led by Captain Terrill—the man who ordered his wife’s and son’s murders.

He is forced to flee but Josey Wales manages to rescue Jamie, a fellow Rebel soldier, from the Union’s clutches. Although Wales prefers to travel alone, he also picks up other stragglers along the way. They include a Cherokee man named Lone Watie, a Navajo woman named Little Moonlight, and a stray dog.

They also save an elderly woman named Sarah Turner, and her granddaughter, Laura Lee, from Comancheros. Sarah is so grateful that she tells them that they can all stay in an abandoned ranch that was once owned by her son, Tom, in Texas. Two men who used to work for Sarah’s family, Travis and Chato, also join the group a few towns later. But as the group continues its journey, both men are kidnapped by Comancheros.

Josey does not intend to become attached to these people, but he must admit that he cares about them. After they get to the ranch, he heads to the Comanche’s tribal chief, Ten Bears, and secures Travis’s and Chato’s release.

He thought he’d find peace in Texas, but there’s a bounty on his head and his enemies are closing in fast.

Now, Josey Wales wonders: will he be hunted down by the Redlegs he vowed to kill or avenge his family? And most of all—will he ever live in peace again?