John Wayne stars! Wedge Donovan is a construction worker-turned-naval officer who doesn’t stop until the job is done.

Wedge Donovan is the brash, impetuous owner of a well-known construction company that does work for the U.S. Navy. His men face daunting risks in order to complete much-needed military infrastructure projects and Donovan insists that the work is always completed to the highest standards.

But now that some of his men are injured and even killed by Japanese forces in the South Pacific, Donovan is infuriated. He feels that the Navy isn’t protecting him or his men, so he yells at mission leader Lieutenant Commander Bob Yarrow that something must be done.

To his astonishment, Yarrow agrees. Eventually, these two men head to Washington, D.C. to discuss a possible solution: establishing a construction battalion that will be the men behind the men with the guns. 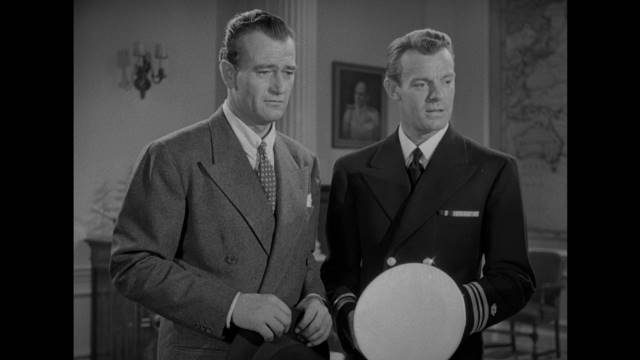 At first, Wedge Donovan is delighted; he is thrilled that his men will be able to defend themselves while doing their work. But when he learns that it will be months before he and his men are actually trained and ready to fight, he declares that they will protect themselves – and then he storms out.

He heads back to the South Pacific for a new job working on an airfield with his crew where they are joined by war correspondents. Among them is Constance Chesley, a beautiful reporter who is dating Bob Yarrow. Although they try to ignore it, there is no denying the strong attraction between Wedge and Connie.

When Wedge’s crew members are shot at by the Japanese, Wedge and his men grab their guns and join the fight. But without proper training and knowledge of the battle plan, some of the men are killed…and Connie is injured.

The time has come, Wedge realizes, to become a Fighting Seabee. The real question is, can he live up to the Navy’s strict code of discipline…or will his own recklessness make this a job that even Wedge Donovan cannot get done?