Texas Ranger Jake Cutter arrests gambler and alleged killer, Paul Regret. All he has to do is get the suspect to the Ranger Station. But, now, they’re a team, going undercover, to fight a brutal gang of arms dealers.

Gambler, Paul Regret didn’t mean to kill Emil Bouvier, the man he faced in a duel in Louisiana. He intended to merely wound him, but when Emil took a step to the side, Paul’s bullet found its lethal target. Now Paul faces murder charges, and when he discovers the dead man is the son of a prominent judge, he knows his own fate will be at the gallows. So Paul skips town, and while on a riverboat, he meets the haunting Pilar. She’s accompanied by a menacing man who goes by the name of Amelung. Though they have little time together, Paul and Pilar fall in love.

Texas Ranger, Captain Jake Cutter has a straightforward assignment. Arrest Paul Regret and escort him to the Ranger Headquarters, where a Louisiana marshal will bring him back to the scene of his alleged crime, and face the judge’s wrath. Paul gives Jake no trouble, but has just one request: that he can bid farewell to Pilar, but his mystery woman has disappeared.

Jake embarks on the routine job of delivering his prisoner, riding across the plains, Jake on a horse, Paul on a mule. But soon this ordinary assignment will turn into a deadly adventure neither of them would have imagined. 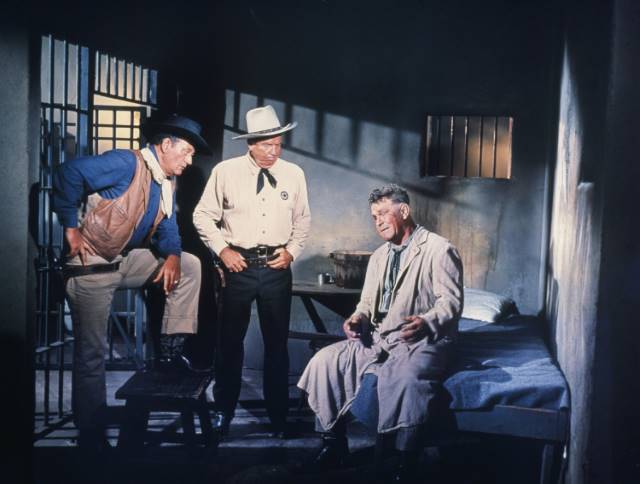 When they ride by a house Jake once owned to find the family killed by Indians, Paul seizes an opportunity to escape. He knocks Jake out, steals his horse and flees.

Now, back at headquarters, a man charged with gun running confesses that he was on his way to Sweetwater to sell rifles to Tully Crows. Major Henry and Jake discover Tully never met his contact, so Jake goes undercover to make the deal and the arrest.

In Sweetwater, Jake and Tully size each other up. Tully reveals he’s selling the guns to the Comancheros, a gang of white renegades who, in turn, sell liquor and guns to marauding and murderous Comanche Indians.

Before they complete the deal, Tully wants to get to know Jake to be sure he can trust him. They go out on the town, get drunk and end up at a poker game. When they sit down, Jake comes face-to-face with Paul. Afraid he’ll blow his cover, Jake introduces himself as Ed McBain, and Paul plays along, but as the game progresses, Tully becomes suspicious of the furtive glances exchanged by Jake and Paul. He accuses Jake of cheating. Tully pulls a gun, and Jake has no choice but to shoot him.

Instead of a gunrunner in irons, Jake heads back with Paul in custody. Along the way, they stop at a ranch where Texas Rangers on Comanche patrol stay, and that night, Indians attack. The few Rangers who are there, Jake and Paul are greatly outnumbered, but Paul becomes an unlikely hero.

Because of that, when Major Henry assigns Jake the perilous job of going undercover to infiltrate and bust the Comancheros, Jake requests Paul as his partner. Paul, now exonerated of his previous charge, agrees to take the job, but nothing prepares the unlikely duo for the shock awaiting them when they encounter the leader of the Comancheros.

All in the Family…

Look for John Wayne’s children in The Comancheros.

A Tribute to John Wayne's "The Cowboys," now 50 years old—and what happened to those young actors.