James Garner stars in this fun Western where the laughs keep coming. A conman sneaks off a train to get away from his fiancé, only to be mistaken for a notorious gunfighter. From the women to the mining rivals, everyone wants him on their side. What could possibly go wrong?

Stars James Garner, Suzanne Pleshette, Harry Morgan, Chuck Connors! In the same spirit as Support Your Local Sheriff, this fun Western brings back many of the familiar faces that made the first movie so enjoyable. Led by James Garner, it has its sights set squarely on your funny bone—even as it works its way into your heart. 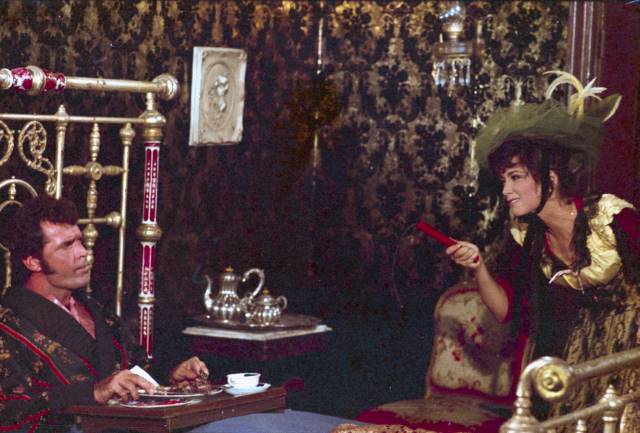 Latigo Smith thinks his luck may be about to change. He’s jumped off the train to Denver to get away from his dance hall madam/fiancé, Goldie, and he seems to be in the clear. But the dusty little town of Purgatory seems to have its own set of plans for him. He’s instantly mistaken for a notorious gunman, and rifle-toting Patience Barton aims to shoot him on sight. But her father, Taylor Barton, has other ideas. He thinks Latigo is actually Swifty Morgan, a gunman hired by rival mine owner Colonel Ames, and he wants to hire him away from his enemy.

Latigo realizes that everyone thinks he’s Swifty, and as long as it works for him, he’s fine with that. He’s too busy doing cons on the hapless townspeople and searching for a doctor to remove a bothersome tattoo of Goldie from his chest to worry about anything else. Luckily, along the way, he meets ne’er do well Jug May. Jug offers to sell his spurs to Latigo so he can get something to eat. Since money is the least of Latigo’s problems, he gives Jug $500 for the silver spurs.

It doesn’t take long for three things to happen: one: the townspeople vie desperately to hire Latigo/Swifty away from their rivals. Two: Latigo loses $4600 on a roulette wheel when “the need to bet on the wheel” overcomes him. Three: he concocts a con with Jug and tells everyone that he works for Swifty…and that Jug is in fact, the notorious gunman.

Never mind that Jug can’t shoot to save his life, or that Latigo just plans to stick around long enough to win his money back and get his tattoo removed. He assures Jug that he’ll never have to shoot a single bullet even as he spends more time with the lovely Patience…and endears himself to other women as well. Meanwhile, Latigo and “Swifty” make lots of money. What could possibly go wrong?

Well, everything—since the real Swifty Morgan is coming to town….

Before They Were Stars

And Introducing…Actors’ Debuts By Henry C. Parke It always creates a tingle of anticipation when a movie’s opening credits... READ MORE