A tough marine sergeant must transform soft recruits into fighting men that understand duty, honor, and discipline if they hope to survive one of the greatest battles of all time….

Sergeant John M. Stryker is not exactly adored by his enlisted men. In fact, they despise him. To them, Stryker seems cold, calculating, and ruthless because he trains them without mercy. Two of his men are his greatest detractors: PFC Al Thomas, who thinks that Stryker is responsible for his demotion; and PFC Pete Conway, the son of a Colonel that Sergeant Stryker previously served under and admired.

The sergeant tries to bond with Conway since he admired his father so much, but Conway will not have it. He tells Stryker that he didn’t like his father and his father didn’t like him very much either because he thought he was too soft. Conway also leaves no doubt that he doesn’t admire or even like Stryker, who has embraced his father’s uncompromising style of unyielding discipline. 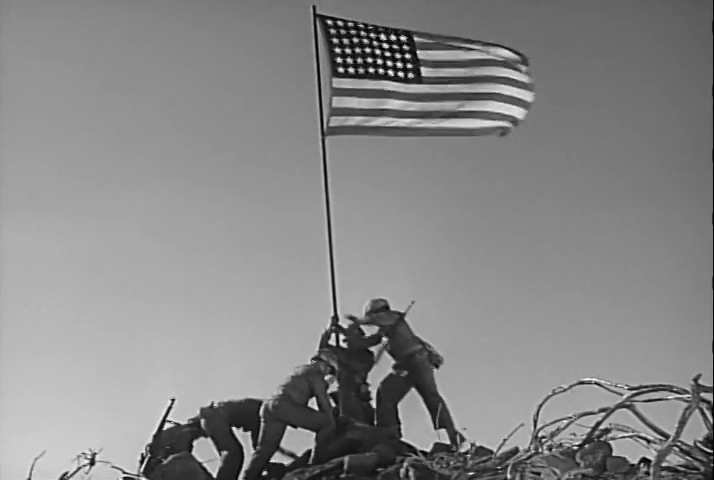 In his defense, Stryker intends to take these men and make them into the very best fighting forces he can, while holding them to a strict code of ethics. They can hate him if they like, but in his opinion, to do anything less could lead to their certain deaths – and the ultimate failure of their mission.

It’s not until the men begin to see active fighting that they come to appreciate Stryker and his methods. Whereas before they resented him for his unrelenting demands, now they see that their hard-won discipline and physical fitness will help them endure the rigors of battle that definitely lie ahead.

In between all the fighting, they discover that Stryker isn’t a monster at all. He is just a man like them who might make mistakes, but he tries his best to be honorable and just. Could it be possible that Stryker has a heart – and that he deserves their admiration?

Maybe, maybe not. But for now, they have no choice but to follow Stryker as he leads them to Iwo Jima for what could prove to be the bloodiest battle of all….

John Wayne Lived by The Cowboy Code, on On-Screen and Off

“You have this young boy, who has a sickly father, and they move west to the Mojave Desert to try to farm. That’s a rough place to... READ MORE