A former bounty hunter reluctantly agrees to guide a greedy land baron into the mountains to find a Mexican revolutionary. Now, the bullets are about to fly….

Clint Eastwood and Robert Duvall star in this beautifully filmed, action-packed Western that boasts a screenplay by Elmore Leonard.

In the tiny border town of Sinola, New Mexico, Joe Kidd is being sentenced to ten days in jail on charges of drunk and disorderly conduct and for hunting on Indian land. But before the local judge can pass his sentence, a group of Mexican revolutionaries burst into the courtroom. 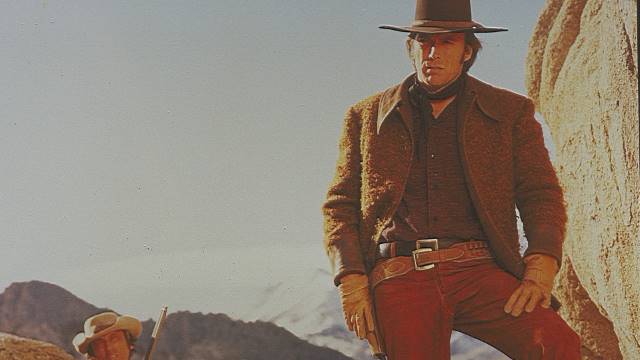 The leader, Luis Chama, protests that the peasants’ land has been stolen by the white men. As the crowd gets rowdier and more destructive, Joe quickly leads the judge out of the courthouse and towards the safety of the saloon. He suggests that the judge quietly slip out the back door and disappear. A little while later, when one of Chama’s men sees Joe in the saloon, he pulls a gun on him…and Joe Kidd shoots him dead.

The town’s sheriff soon forms a posse and heads out to find Chama. He asks Joe to join him, but since Joe has nothing against the Mexican revolutionary, he refuses. When the posse returns empty handed, Joe goes to jail to serve his 10-day sentence.

But then, land baron Frank Harlan comes to town. He’s brought his mistress and a trio of sharpshooters along with him. He pays Joe’s fine and tells the sheriff to send him over for a talk.

When Joe arrives, Harlan tells him that he and his companions are there to hunt, and he’d like to pay Joe $500 to guide them into the mountains. Since Joe was a bounty hunter before he became a rancher, he suspects that Harlan is hunting for Chama. With that, he refuses the offer and heads back to his own ranch.

But once Joe gets there, he discovers that Chama’s men have stolen his horses and injured his ranch hand. So, he goes back to Harlan and agrees to guide him…but for $1,000 instead.

While winding their way along mountain roads, they stumble across some of Chama’s men. Now, Joe Kidd sees the greedy land baron and his henchmen commit savage acts…which aggravates Joe’s sense of justice.

There may be bloodshed in his future, but if Joe has anything to say about it, it won’t be his that’s spilled….