Starring John Wayne, Lee Marvin, and Jack Warden. Beautiful scenery, great characters, a fun story, and The Duke make this movie a good time for all!

It’s December 7th, and In the French Polynesian town of Haleakaloha, two things have been a certainty for the past 22 years: the island is a tropical paradise; and Thomas “Boats” Gilhooley and Michael “Guns” Donovan will spend their shared birthday having an all-out brawl.

This year’s fistfight goes down at Donovan’s Reef, which is Gun’s tavern…and the party plans put in place by Donovan’s kids are instantly messed up. The only thing that keeps them from completely destroying the place is when Doc Dedham, the third Navy buddy in this trio, arrives to break things up. 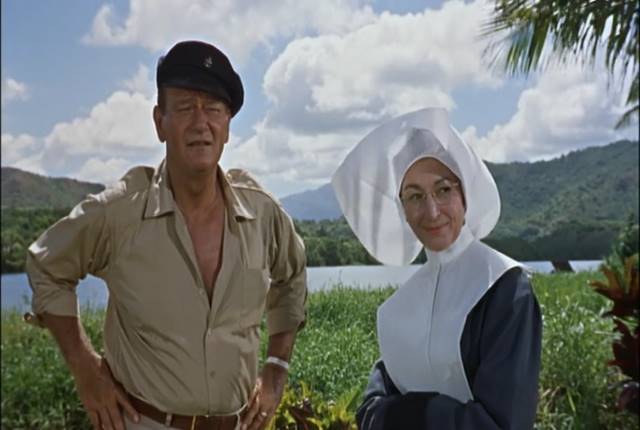 Since Doc is the only doctor on the archipelago, he’s about to leave for a couple of weeks to check on the health needs of the residents living on the outer islands. So, besides wishing his two buddies a Happy Birthday and breaking up their annual bar fight, he also asks Donovan to watch his three children while he’s gone.

Meanwhile, in faraway Boston, Miss Amelia Dedham, chairman of the board of Dedham Shipping Company, learns that her father is set to inherit a fortune. That is, unless she can prove that he’s violated a morality clause. Amelia has never met her father, but she thinks if she goes to Haleakaloha, she can find the proof she needs to get him disinherited and take the money herself.

When word hits the Island that Doc’s prim and proper daughter, Amelia, is headed to see him, Donovan, Gilhooley, and the Marquis de Lage (the French Governor of the island) decide to tell her that Doc’s three children are Donovan’s children…and let Doc explain things to her when he gets back.

When Amelia first arrives and meets Donovan, she wonders about his half-caste children and what happened to their mother. Her relationship with Donovan and Gilhooley is stormy, while the Marquis de Lage tries to court her.

Which is great as far as Donovan is concerned. The only real problem is…how will Amelia react when Doc comes back, and she discovers that Donovan has been lying to her all along?

Find Your Inner Duke! We’ve all got a little bit of The Duke in us—when we stand up for what’s right, help a neighbor, voice an... READ MORE