Danny Glover and Timothy Busfield star! This historic epic tells the tale of the African American cavalry regiments – Buffalo Soldiers – that served in the Arizona territories following the Civil War.

Starring Danny Glover, Timothy Busfield, and Carl Lumbly! This historical epic was beautifully filmed on location in southeastern Arizona near the very lands where the Buffalo Soldiers served.

Following the end of the Civil War, many former slaves head West in the hopes of starting a new and better life. Washington Wyatt is one of those men. As soon as he is liberated, he enlists in the U.S. Cavalry – joining the African American men of the Cavalry regiments – and heads to southwest Arizona to do his part in protecting settlers and fighting in the Apache wars.

Sergeant Wyatt leads a band of African American men who are known for their toughness and strength. They are called “Buffalo Soldiers” by the natives because – like the fierce and unrelenting buffalo – they never stop fighting even when they are wounded. 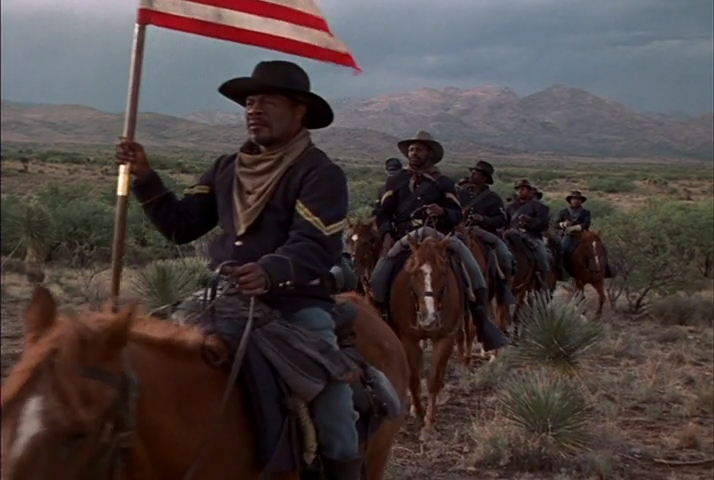 Their missions are bloody and brutal. Wyatt’s men fight many battles and face many losses, endure endless humiliations and racism from white officers, brave the perils of the harsh landscape and beat back the Apache threat on a daily basis. In spite of all of this, Wyatt and his men serve bravely and with honor.

Their latest mission requires finding the Apache chief, Vittorio. Vittorio is notorious for killing settlers and the U.S. Cavalry intends to capture him. Wyatt doesn’t question his orders; he is a dedicated, brave, and honest leader and he has every intention of completing his mission. But still: how much brutality is enough?

As time goes on and Sergeant Wyatt comes to know this harsh terrain – and the people who inhabit it – he begins to see parallels between the way the natives are treated and how the slaves were treated. More importantly, he recognizes their shared humanity.

Now Wyatt is forced to consider: are there times when following every order is more important than following your conscience?

James Garner: Hollywood’s Oklahoma Sweetheart In a career that spanned six decades, America had a sweetheart they could count on:... READ MORE

It’s Time for The Duke Days of Summer Final Exam! Our Duke Days of May event is almost over—on TV. Here on the website, we’re... READ MORE