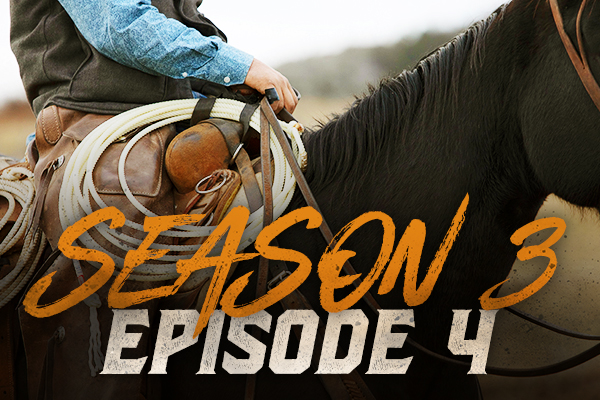 Renowned horse breeder and trainer Ken McNabb joins Trace, Cash, Buddy, and the 11 remaining cowboys for the immunity challenge. Assessing the cowboys’ acumen of the horse market, the competitors make educated guesses on a series of horses’ monetary values. Each round, cowboys furthest from the correct price are out of the running for the immunity buckle. Much to Trace and the judges’ surprise, Jamon, the winner of the previous immunity buckle, is the first one out. Sarah proves that she has a keen eye for the business and walks away safe from elimination.

Sarah shares the pride she has for ranching and beekeeping. While Coy tries to stir up trouble with some of the other cowboys, a conversation about marriage and the strain cowboyin’ puts on relationships makes its way into the discussion, bringing Coy to open up about troubles at home.

In a shocking turn of events, Trace announces that another cowboy will be joining each team for the elimination challenge—former San Francisco 49ers tight end Vernon Davis and former New England Patriots fullback Glenn Gronkowski. Designed after the beloved film City Slickers, the seasoned cowboys are responsible for guiding their inexperienced new teammates through the challenge.

Once they look the part, Glenn joins The Blue Team, and The Green Team welcomes Vernon with open arms. To prepare the football stars for the challenge, their teammates give them a crash course in Cowboyin’ 101, and Glenn and Vernon gain a new respect for the way of life. Keaton gets on hands and knees to help Vernon get a better idea of what he should expect.

Split into three parts—the teams must quickly pack up camp before a stampeding herd reaches them. Then, they must drive the herd to pasture and gather the stray steers located within the bush, in the trenches, and up a mountain along the trail. The Green Team kicks things off, and they pack up camp just in the nick of time. Jamon heads out to grab the first stray steer, but only pushes it away from the herd. Seeing his teammate in trouble, Keaton comes to assist. Things get increasingly worse when the steer makes its way to the ravine, and caught up in the moment, Jamon rides off, hoping it will make its way back to the herd. With the newbie up next, Vernon impresses everyone with his cowboyin’ skills, and Stephen Heitmann takes on the hardest steer of the bunch with success.

During The Blue Team’s time to ride, the contestants pack up camp with time to spare, and as the herding begins, Sarah gives Glenn a hard time. Undeterred, Glenn goes after the first steer and is a natural. Stephen Yellowtail takes a backseat in this challenge and goes for the easiest steer. Cody makes the call to rope a steer as a safety precaution when his horse suffers an injury. Although the right move, judges have to dock the team’s time. Chris and Sarah tag team to catch the last two steers, but Chris’ aggressive approach puts them in a tough spot. As Sarah unwaveringly pursues the steer over a fence and through a creek, Chris leaves her high and dry when he gives up and leaves her on her own.

After The Blue Team’s mishap, Chris makes a last-ditch effort to form an alliance with Coy to throw Stephen Yellowtail under the bus. While Coy agrees to his face, the proposition leaves a bad taste in his mouth and clarity on who should be the one to hit the trail.

As the sun goes down, the cowboys head to the arena for elimination. Although both teams received docks in their times for not gathering all of the steers, The Green Team wins the challenge. With Jamon, Stephen Yellowtail, and Chris on the chopping block, tensions rise when Coy doesn’t stick to his word and Trace sends Chris packing. 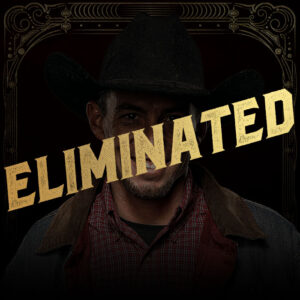 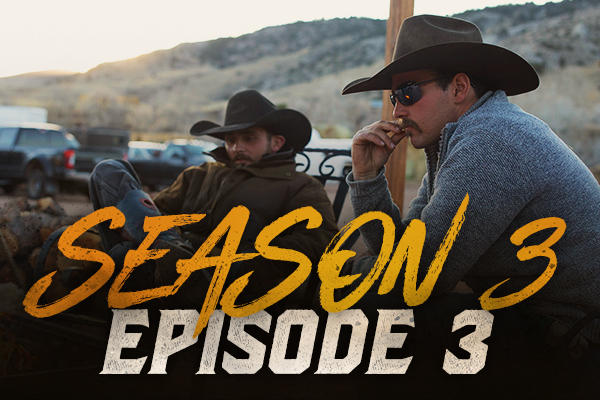 The ever-changing Wyoming weather delivers a fierce windstorm to keep the remaining 12 cowboys on their toes. Drawing straws to pick their opponent for a cowboy standoff immunity challenge, some contestants choose to go up against their biggest competition, while others go for the weakest link. Fighting to rope a steer first, the top three who beat out the rest go head-to-head, and the cowboy who plays dirty wins immunity. In their downtime, contestants from rival teams bond over their similar paths in life, and the loss of a parent, while two others clash.

Designed with the gusty wind as inspiration, the elimination challenge focuses on ranch work to prepare for a storm. In a relay-style race, each team member takes on a separate task:

3. Gather and herd 10 cows back to the corral

4. Ride down a creek and up the water trough line

6. Lead six horses to the barn

While the team’s success is dependent on the individual, the cowboys narrow in on who they think  weighs down their teams. On The Blue Team, the high elevation leaves one contestant unable to catch their breath, and another loses control, but their impeccable horsemanship gets them back on track. On The Green Team, a cowboy starts to feel the pressure, causing them to injure themselves and make big mistakes that may cost them. In the end, Trace, Buddy, and Cash send a contestant packing. 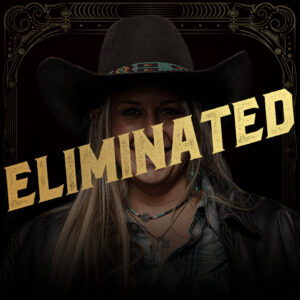 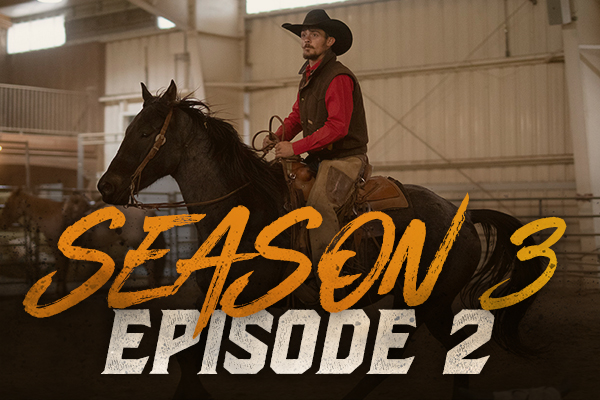 The sun comes out in Wyoming just in time for the remaining 13 cowboys to take the first immunity challenge of the competition. Split up into three parts, the contestants must first saddle their horse and go head-to-head in an old-fashioned race. The challenge ends early for one contestant when his horse makes a break for it. Next, the six fastest cowboys move on to a barrel racecourse, where only three move on to the Old West trivia. Finally, after a close race, the cowboy who won’t back down wins the immunity belt buckle and heads into the team challenge safe from elimination.

Designed after the treacherous journey of Jim Craig from the film The Man from Snowy River the teams must lead 60 horses on a 2-mile course of rough terrain that includes traveling down a mountain and through a river. The Blue Team learned from their past mistakes and approach the challenge as a unified team. The Green Team takes the lead from a seasoned cowboy, but poor communication creates frustration, and things don’t go as smoothly as anticipated. While two cowboys on The Green Team grow mutual respect for one another, members of The Blue Team find themselves at odds. In the end, Trace surprises everyone by sending a frontrunner to hit the trail. 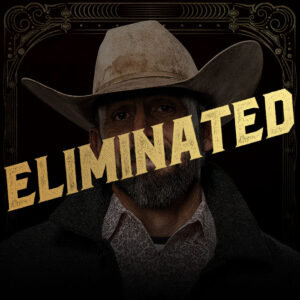 Fourteen cowboys from across the country, and from diverse and varied backgrounds, arrived at Powderhorn Ranch in Douglas, Wyoming, and even as they introduced themselves, they began sizing up the competition, planning alliances, and determining their strategies. Smart move, because Trace wasted no time putting them to the test. 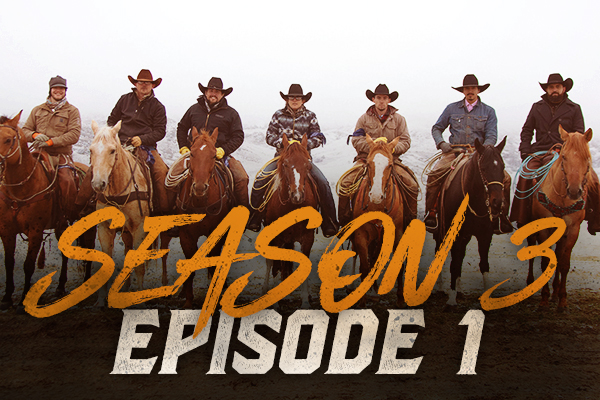 Trace split the cowboys into equal teams in a random drawing of names.

It was 32 degrees with snow on the ground as the teams assembled. Guest judge, Booger Brown of The Cowboy Way: Alabama, explained the rules. Out in the wide-open pasture were 50 head of cattle—one of the prizes the eventual winner will take home.

Step 1. Separate the 25 blue-tagged cows and drive them into the portable pen.

Step 2. Cut the two bulls from the herd and load them onto a trailer.

Step 3. Gather the remaining 25 gold-tagged cows, and like the scene from the mini-series, Lonesome Dove, drive those cattle down the ravine and across the river.

The Green Team went first, and Diamond Jim, the oldest competitor, immediately took the leadership position, much to the frustration of Stephen Heitmann, who thought everyone’s ideas should be heard before making a plan. Despite this initial conflict, the cowboys watched and listened to each other, and formed a bond with the goal of getting the job done right. A couple of time-wasting mistakes could have been avoided, but overall, the Green Team had a smooth run and a good plan.

The Blue Team was up next, and right off the bat tension was high. Stephen Yellowtail stepped up to lead and as he explained his strategy, Sarah Foti immediately disagreed, no discussion, no compromise, but Stephen prevailed—for the time being. Cody Traylor, who had taken a lot of razzing, especially from Sarah, for his Buckaroo swagger and flat-hat style, volunteered to man the gate on the portable corral, while everyone else headed out to sort and drive. But it was clear, that Cody had no clue how to work the gates or the pen’s panels. The team’s lack of communication, listening, and mutual respect started to unravel the tenuous teamwork they had established when they set out. They lost precious time at almost every leg of the challenge, and ultimately, lost the challenge. 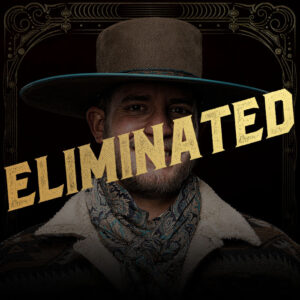