This Mother’s Day, we at INSP want to thank all moms everywhere, and celebrate the moms from some of your most beloved shows!

You know Karen Grassle from her most famous role as Caroline Ingalls “Ma” from the classic and timeless show Little House on the Prairie. This beloved mother was born on February 25, 1942 in Berkeley, California. Karen was not only considered a miracle on screen, but was also considered a miracle baby, given that her mom had four miscarriages before she was born. Beating the odds, Karen would go on to become a classic motherly icon, exemplifying a mother’s grace and determined drive in her role as Caroline Ingalls, which she just so happened to have herself.

Growing up, Karen’s mother managed a restaurant, and her father owned and ran a gas station. During her high school years, this go-getter served as the student body vice-president, highlighting her leadership and confident demeanor. After graduating as the valedictorian of Ventura High School in 1959, Karen made her way to the University of California, Berkley, where she studied English and she discovered her love for drama and the theatre. This discovery led her to graduate with two BA degrees, one in English, and the other in Dramatic Art. After college, Karen traveled to London, England, where she studied at the Royal Academy of Dramatic Art. Karen refers to this time as “one of the most exciting learning experiences of my life: the school was superb, and we could go to the theater in London and see the finest actors and productions in the English language.”

Returning to the United States, Karen started using the name Kay Dillinger, and saw an opportunity in New York, an audition for The Gingham Tree. To audition, she borrowed a dollar from a friend to cover the costs, and it paid off, as she was cast in the play. This play was the foundation for her career, as she earned a nomination for Best Newcomer soon after. Drawing off her fame from the play, she started using the name Gabriel Tree for her stage name, referring back to the last name of the character she portrayed in The Gingham Tree. While the theatre held a special place in her heart, she went on the big screen with commercial appearances in the early 1970’s. It wasn’t until 1974 that this young, Hollywood marvel debuted in her star role as Caroline Ingalls in the hit series 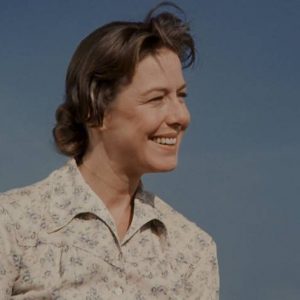 Little House on the Prairie. The newcomer beat our 47 other actresses in her audition, and remembers the experience fondly, with actor Michael Landon (Charles Ingalls), exclaiming “Send her to wardrobe!” while they read the script together. After some discussion, Michael Landon also convinced her to change her name back to her given name. Karen recalls becoming Caroline Ingalls as a learning process, but remembers the time fondly. Karen’s dedication to the role of Caroline Ingalls made an impact on not only the audience, but her cast as well. Co-star Melissa Gilbert, who played Caroline’s sweet and adventurous daughter, Laura Ingalls, has stated that she learned so much from watching Karen do her warm-up exercises and studying her lines.

Caroline Ingalls was known for her sweet demeanor, humble personality, and the glue that held the whole family together. The mother and wife was supportive of her husband’s career, and put her children’s needs and adventures before her own. However, many episodes embark on a story in which Caroline gets to have her shining moments as well. To this day, Karen’s favorite episode to film was “A Matter of Faith,” where Caroline Ingalls cuts her leg and the cut becomes infected. She believes that the episode was written for her to show off her greater range, showing Caroline’s strong will, and the power of a mother’s strength.

Karen often drew on her own life trials and events to mold herself into Caroline Ingalls, channeling everything from childbirth to breakups. During her time on the show, Karen married J. Allen Radford, and they had one daughter together, Lily Radford. Not long after the birth of their daughter, the two divorced.

“My home is where you are. And you and the children are my family.” – Caroline Ingalls

Extending love to an extended family — that’s what being Olivia Walton was all about. Actress Michael Learned portrayed the selfless mother on The Waltons, and drew from her own personality and life experiences to do so.

Michael was born April 9, 1939 in Washington, D.C., where she was the oldest of six daughters. Her parents were under the impression they were having a boy, and had picked out the name Michael, but were delightfully surprised to find out a baby girl had entered the world. After seeing their daughter, they decided to keep the original name. Her father worked for the United States Ministry of Foreign Affairs, which caused the family to move frequently and see the world. Before her family moved overseas, Michael grew up on her family’s farm in Connecticut. In 1950, the family moved to Austria, and later on to England. It was there, in boarding school, in the country that brought the world Shakespeare, that Michael fell in love with theatre and set her heart on becoming an actress.

At 17, Michael married Peter Donat, a Canadian actor. As a family, they raised three sons before divorcing after 17 years. During Michael and Peter’s time together, they acted in many Shakespeare Festivals in both the United States and Canada, as well as at the American Conservatory Theatre (ACT) in San Francisco. This experience served as the foundation of Michael’s career, and during the ACT production Private Lives, Michael was spotted by producer, Lee Rich, who was immediately drawn to her talent and urged her to try out for a new television series about a Depression era family, The Waltons. She landed her the role of Olivia

Walton in 1971, where she portrayed the faithful and nurturing mother for nearly a decade. During the tenure of the show, Michael integrated her own story ideas into the shows scripts and plots. 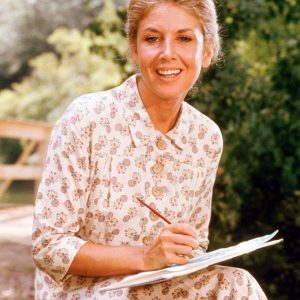 After her role on The Waltons, Michael went on to star as Mary Benjamin in the television series Nurse. This role led to her forth Emmy Award in 1982. She also starred and appeared in many television shows, and reappeared as Olivia Walton for many reunions and specials over the years. Today, the legendary actress continues to guest star in hit television series from Law & Order: Special Victims Unit to the daytime soap, All My Children. For her role as Olivia Walton, Michael received six Emmy Award Nominations for Outstanding Lead Actress in a Drama Series, and took home the golden statue three times in 1973, 1974, and 1976.

“All of us from ‘The Waltons’ still love each other. I think we’re closer than some real families.” – Michael Learned

From the mountains to the prairie, a mother’s love knows no boundaries. To all mothers everywhere, INSP says: “Thanks, Mom!”