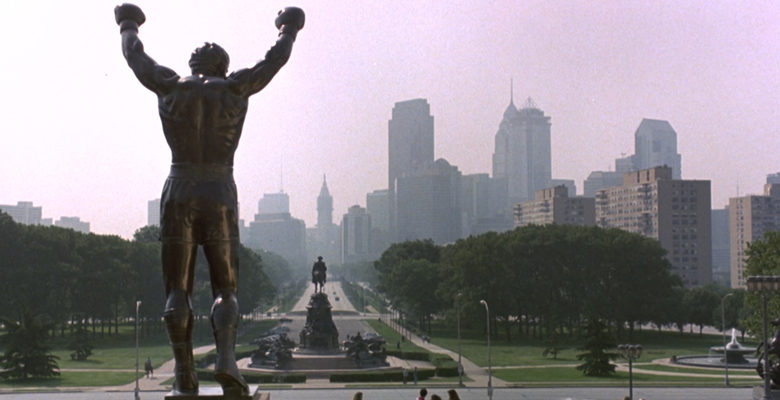 A Few Stories Behind the Stories

Rocky’s rags-to-riches tale took struggling actor/writer, Sylvester Stallone on his own rags-to-riches ride—and viewers on an uplifting journey, rooting for the underdog boxer, and cheering as he triumphs. Enjoy this compilation of trivia and interesting facts about the Rocky movies. 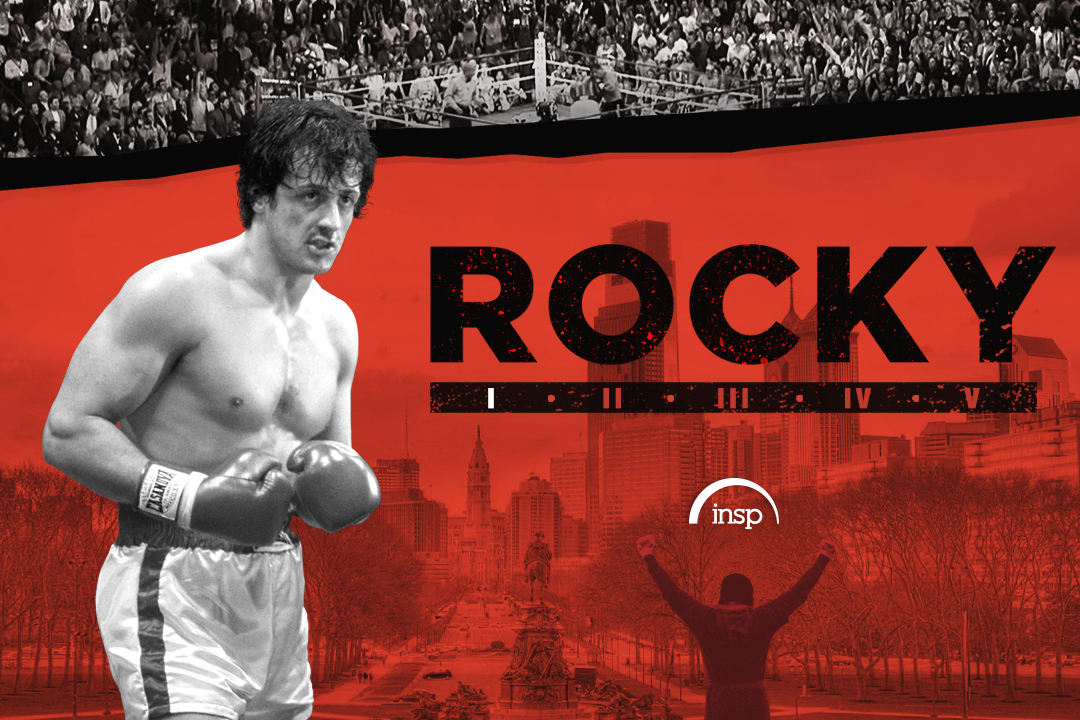 In the original Rocky script, Rocky throws the fight and gives up boxing, disgusted by contemptable goings-on in the boxing business.

The footage of Rocky running up the steps of the Philadelphia Museum of Art is so iconic, that people go there to make their own Rocky run. The actual shots of Rocky, first failing in his attempt, then triumphantly racing to the top with energy to spare were shot on the same day, a mere hour apart. How many steps, you ask? 72-each time he ran!

Insult to Injury to Casting

When boxer, Ken Norton dropped out of the role of Apollo at the last minute, Carl Weathers got an audition. Not knowing he was reading opposite the star of the film, he insulted Sylvester Stallone’s acting and lied about having boxing experience. Stallone gave him the part.

All in the Family

Frank Stallone, Sylvester’s brother, appears in the movie as a singer in a street group, and as a guy walking out of an apartment, at which point Rocky insults him. Sylvester’s father, Frank Stallone, Sr. has his moment in the spotlight ringing the bell at the big fight. Behind the scenes, Sasha, Stallone’s then wife, was the still photographer.

On a Low Budget

Rocky was shot on a mere $1 Million budget—that’s pennies in Hollywood. Here are a few ways they cut corners:

Turns out there’s more to a boxer’s workout than running. When shooting Rocky, they discovered they had way too much footage of Rocky running, so they decided to vary his routine, by throwing in some one-arm and clapping pushups. Didn’t matter that Stallone had never done them before! Rocky the character would be proud of Stallone, his creator, as Stallone handled them like a champ.

Yes, “The Italian Stallion” has a nice ring to it, but the Rocky creator also chose the nickname because his last name, “Stallone,” means “stallion” in Italian.

In the scene where Gazzo reprimands Rocky for not breaking the dockworker’s thumbs, Gazzo takes out and uses an inhaler in the middle of his dialogue. Genius bit of acting business? Yes, in hindsight. Actor, Joe Spinell, was actually having an asthma attack. Because it added more dimension to the character, they left it in.

In the now famous scene where Rocky works out, punching hanging carcasses of meat, Stallone hit them so hard, he permanently flattened his knuckles.

Mirror, Mirror on the Wall

The pictures of Rocky as a young boy on his mirror, are actually photos of Sylvester Stallone when he was a kid. 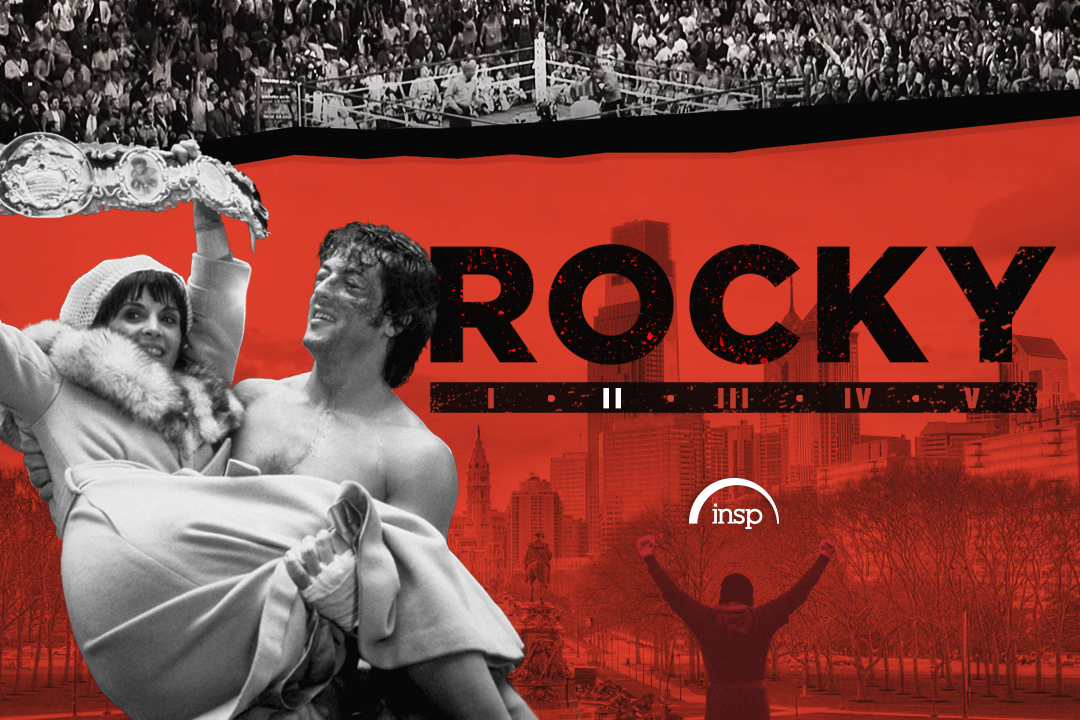 Who’s that in the ring with actor, Sylvester Stallone? Watch for a cameo by former Lightweight Champion, Roberto Durán as one of Rocky’s sparring partners.

A big fan of Rocky, Muhammad Ali arranged a private screening as soon as Rocky II was released. With Ali was renowned film critic, Roger Ebert, who reported that Ali was particularly enthralled by Apollo Creed, remarking how the fictional champ’s moves closely resembled his own.

In 2013 a writer for Philadelphia magazine plotted the course of Rocky’s famous run from his house through the streets of Philly to the Philadelphia Museum of Art. As the montage builds, more and more children join the iconic jog which ends with Rocky at the top of the museum steps surrounded by cheering kids. Well, this would not be your average training run, mobs of children aside, as the run would have covered 30.61 miles. That’s more than a marathon. And making their film debuts that day: 800 of Philly’s finest youngsters.

After the huge success of Rocky, Sylvester Stallone was uncomfortable in front of the camera. A true professional actor and writer, he used his own feelings and insecurity to create the scene where Rocky fumbles through a commercial shoot with disastrous results.

In Stitches—Not the Funny Kind

Training during production, right before the big fight scene, Stallone was bench pressing 220 lbs, when the weight dropped. He suffered a torn pectoral muscle that required 160 stitches. Did they postpone the fight scenes because of his injury? C’mon! This is Rocky!

Not Just a Prop

Now that he’s the Champ, Rocky has some cash to toss around, and doesn’t a bigtime boxer need a hot set of wheels? Apparently, Stallone did, too. After the film wrapped, he bought the black and gold 1979 Pontiac Trans Am his character cruised around in, on screen.

In Europe, Rocky II was released and advertised with the title, Rocky II: Redemption. 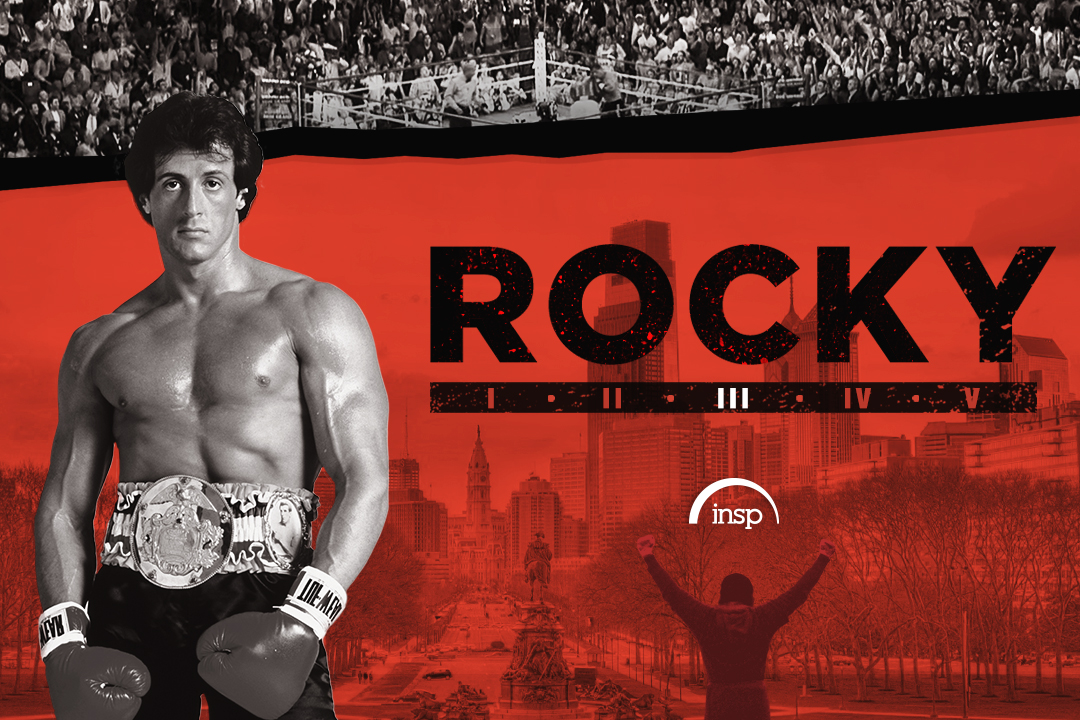 In 1979 Stallone told Roger Ebert that in Rocky III, Rocky travels to Italy where the big fight takes place in the Colosseum in Rome. A year later, he still hadn’t resolved the ending to the movie.

Everything Happens in Threes

Rocky III was supposed to be the last film in the Rocky trilogy.

Don’t try this at home—or anywhere! For this film, Stallone devoted all his time to intense workouts and a strict meal plan, existing on a daily diet of just 10 egg whites, one slice of toast and one piece of fruit. At the time of filming, his body-fat percentage was a mere 2.8 percent.

The script didn’t call for Clubber Lang to sport a Mohawk or substantial sideburns. That now iconic look is thanks to Mr. T himself. And did you know that Mr. T was already immersed in the world of boxing prior to his role in Rocky III? He was a bodyguard for Muhammad Ali and Sugar Ray Leonard.

He Didn’t Get the Memo…

Rocky’s corner men at his rematch with Clubber Lang all sported red polo shirts with the word “Rocky” printed across the back, well, except one. Paulie’s shirt says, what else, “Paulie.”

Foreshadowing to a T

In a scene where Clubber Lang is interviewed before the big rematch, he says, “No, I don’t hate Balboa, but I pity the fool.” This was the first time Mr. T used that catch phrase that would become an integral part of his career. 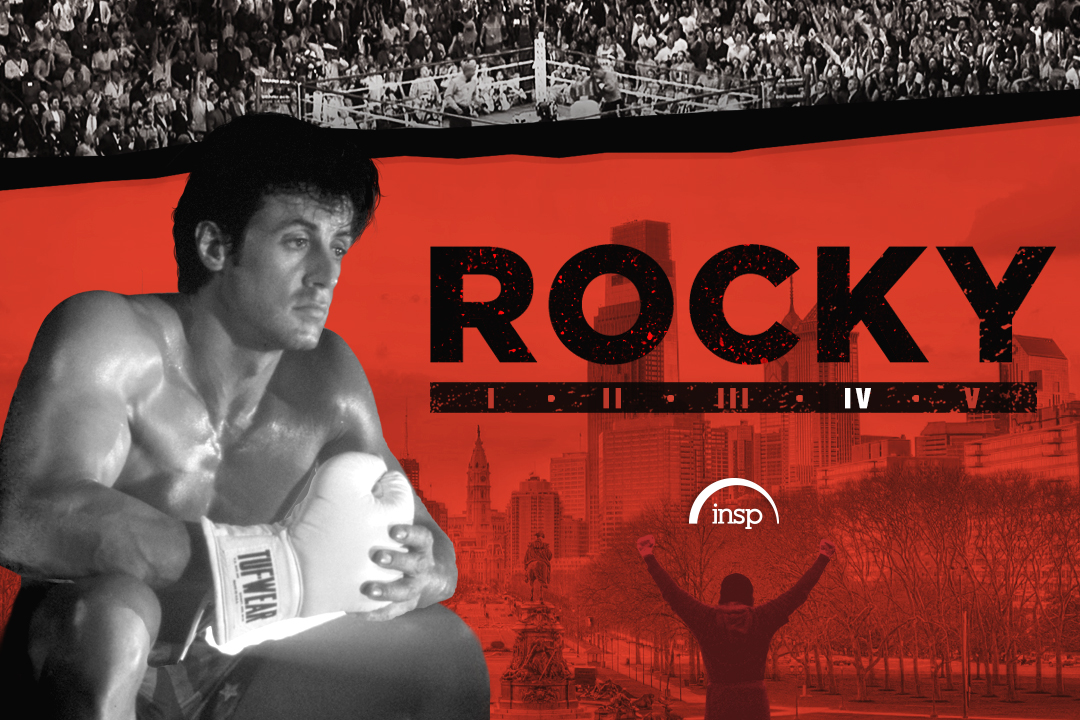 One Power Punch Too Many

Stallone wanted the fight scene in Rocky IV to be as realistic as possible. How do you get that kind of authenticity? You fight for real, so he directed Dolph Lundgren to go for it, and he didn’t hold back. After three takes, Dolph let loose a particularly vicious punch and Stallone called it a day. Later that night, Stallone felt burning in his chest and was rushed to the hospital and remained in intensive care for five days. Lundgren had hit him so hard, his heart smacked against his ribs, and it began to swell. To give you an idea how hard the hit was, this kind of injury usually occurs in car accidents.

To prepare for this installment of the Rocky franchise, Stallone wanted to pump up the muscle, so he hired champion bodybuilder, Franco Columbo as a personal trainer. Stallone gained 10 pounds and put on several inches on his chest and arms.

Though the budget was something like 30 times higher than Rocky, shooting in Russia was not going to happen. All those scenes of Rocky training in the frozen tundra of Russia were shot in Wyoming.

Method Acting to the Max

At one point, Dolph Lundgren was so into character he threw Carl Weathers (Apollo) into the corner of the ring. Shaken and angry, Weathers shouted he was calling his agent to quit. It took Stallone four days to get the dueling actors to cool down, and make peace.

How to Stand Out in a Crowd

Though he had a degree in chemical engineering, Dolph Lundgren was working as a model when he auditioned for the role of Ivan Drago in the initial “cattle call,” where more than 8,000 actors vied for the part. The producers passed on him, stating he was too tall, but that didn’t stop the determined actor. He dressed in boxing gear, had photos shot, and sent them to Stallone. Impressed, Stallone agreed to meet with him, leading to Lundgren getting the part. 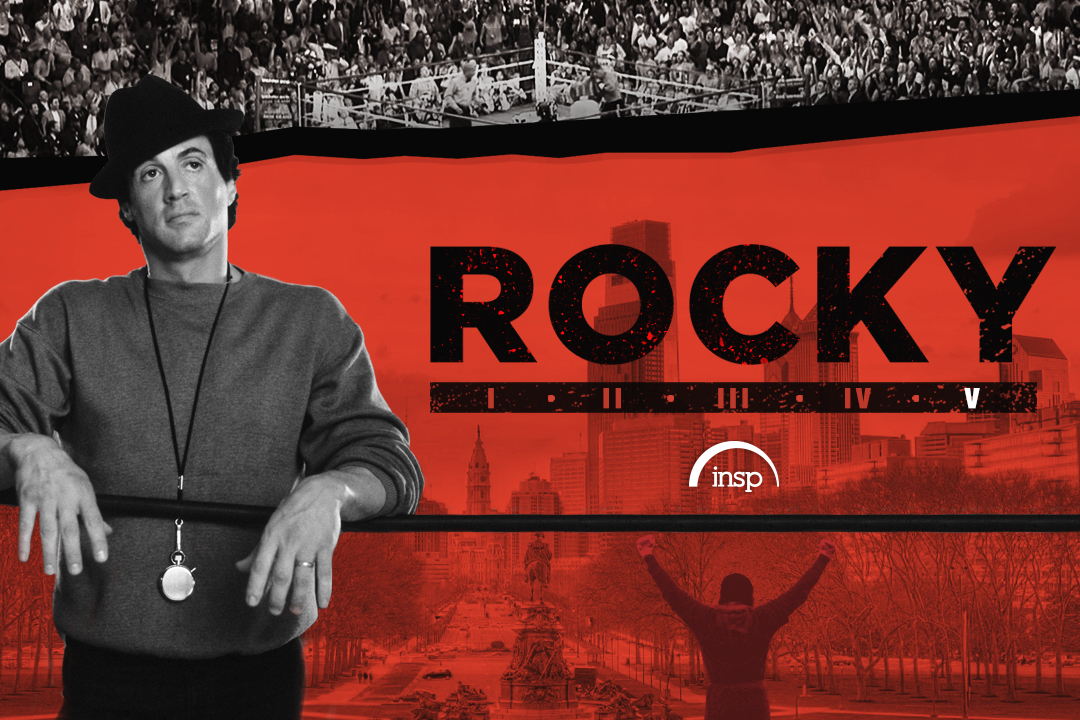 Hey, that actor playing Rocky’s son really looks like him. How’d they do that? Well, that’s because he’s his real son, Sage Stallone. An actor, producer and director in his own right, Sage, sadly, passed away at the age of 36 in 2012.

Come One, Come All!

In Rocky, budgetary constraints prohibited hiring the number of extras needed to fill the stadium for the final fight scene. Clever photography and stock footage gave the impression it was a packed house. Oh how far we’ve come! The fight scenes between Tommy Gunn and Union Cane were shot at the Philadelphia Civic Center and required 10,000 extras! Anyone who wanted to attend, and maybe, just maybe, get their moment of fame, could get tickets in the newspapers or from local radio stations.

All in a Day’s Work

Back in 1976, Sylvester Stallone embarked on a low budget Hollywood film project called, Rocky. His salary was $23,000, and the film was a hit. In 1990, his successful boxing movie franchise was up to Rocky V, and Stallone earned a cool $15 million. Now that’s a raise!