Cynical mercenary Hogan rides into town and saves a nun from bandits. The pair journey to a nearby Mexican camp and decide to help Mexican fighters attack a French fort. But Sister Sara has a big secret…

Clint Eastwood and Shirley MacLaine star in this action-packed, classic Western that is thoroughly entertaining from start to finish.

A short time after the Civil War has ended, an ex-soldier named Hogan rides into town and sees a woman about to be attacked by ruthless bandits. Without hesitation, Hogan shoots and kills all three of the men and saves the helpless woman.

While he isn’t surprised to see anyone acting the way the three bandits did, he is surprised to learn that the woman he saved is actually a nun! Even more surprising is that Sister Sara has valuable information about the French garrison that Hogan plans to attack, so against his better judgment, he helps her escape the French cavalry and travel under his protection. 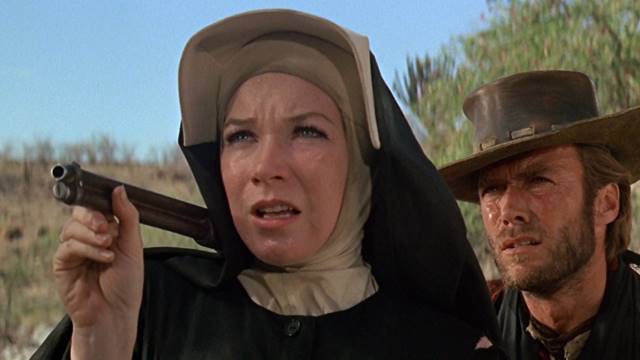 Not being all that religious himself, Hogan isn’t quite sure what to make of the good Sister’s unusual habits. She drinks his whiskey…swears a lot…and smokes his cigars. To top it all off, she’s even a great shot! Sister Sara is also a good nurse, helping to bandage him when he’s shot in the shoulder with an arrow.

But Hogan is in too deep now to start questioning her motives – and risk losing out on a fortune. The pair becomes good friends and he trusts her – even though he did say that he “never knew a woman who wasn’t a born liar.” Plus, he has begun to enjoy her company and rely on her in ways he can barely admit.

When they meet up with a group of Mexican revolutionaries determined to overthrow the French colonists, Hogan and Sister Sara decide to join their cause and fight with them. They are determined to go on a deadly mission to capture the French garrison.

But first, Sister Sara has a secret to tell Hogan….