Pennsylvania native Megan High developed a love for Little House on the Prairie, The Waltons and Dr. Quinn, Medicine Woman thanks to her beloved grandmother, Arlene Becker. The 23-year-old recent graduate of Appalachian State University in North Carolina now employed at the school as a Content Producer shooting and editing video for the Athletics Department, recalls her introduction to her favorite shows.

“We watched those shows when we were younger, when we went to Grandma’s house. She had them on VHS,” she says, “Whenever we would go to Grandma’s we were guaranteed a nice cup of hot tea and a day filled with good, wholesome, TV shows. It feels like yesterday that I was curled up beside my Grandma on the sofa eager to find out how ‘Half-Pint’ was going to get herself out of the trouble she created.

Twenty years later, and my Grandma was still caught up in the life of Olivia Walton and Dr. Quinn. Unfortunately, we couldn’t curl up on the sofa with Grandma and watch these shows.”

Last June, Megan’s grandmother was admitted to a nursing home, a move that was difficult for the elderly woman. Between family visits, Grandma Becker, as the family called her, took solace in television. On one of Megan’s visits to Pennsylvania, she sat with her grandmother watching TV, as this was this their special time to share. Megan flipped through channels, and familiar faces appeared on the screen.

“We saw Little House on the Prairie on TV and we both got excited,” Megan says, “…I remembered it was INSP and when I went home later that day, The Waltons were on TV, and I said, ‘Look dad.’ He’s actually a big Bonanza fan. So that’s how I found that channel, and I will admit I became a little addicted to watching those shows on INSP. Because I knew they were on every afternoon, and I just wanted to follow the stories through, and relive what I saw when I was younger.” 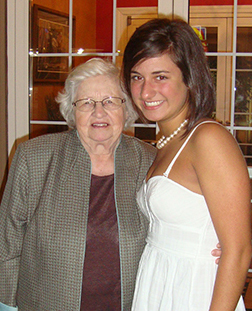 Megan and her family visited her grandmother every day, and sure enough, the TV was tuned to INSP. “It made her feel as if she were home watching our old favorites,” Megan says.

Arlene Becker passed away in August, 2013 and Megan took the loss very hard. She didn’t know how she would get through it. She was deeply connected to her “beautiful grandmother.” Megan recalls the life lessons she learned from this extraordinary woman.

“She was a big believer in the past, and your past makes up who you are today, to hold on and cherish those memories. She’s really big on the morals that she learned when she was younger, how kids were raised, and she believed today, that’s how kids should be raised, too,” Megan says, “Even though my job does deal a lot with technology, I still love the simplicity in the past, and I think that’s where we really connected. My grandma loved collecting things, also, and she would find beauty in anything. Even if it was an old plastic lunch box, she thought it was the neatest thing, and she always made sure that her grandkids could share in the treasures she found at yard sales.”

Since she had to return to work in North Carolina, Megan could stay only a few days with family in Pennsylvania after her grandmother’s death. Still grieving and feeling the loss of family support, she showed just how truly connected she was to her grandmother. She turned on the TV, scrolled through the channels and, like the day in the nursing home with Grandma Becker, she came across an episode of Little House on the Prairie.

“It stopped me, and brought tears to my eyes. I was comforted by the scene on the television. It brought back vivid memories of my Grandma and made me feel as if I were at home…It may sound silly, but INSP helped me cope with the passing of my Grandma. INSP says it best when they say ‘Welcome Home.’ I couldn’t feel more at home while watching this channel.”