From practical protection on the ranch to an ornate and over-the-top fashion statement, the cowboy hat is a mainstay in Western wear. It isn’t going anywhere—and we can see why. But how much do you know about the cowboy staple? Get to know the elements of America’s hardest-working hat. 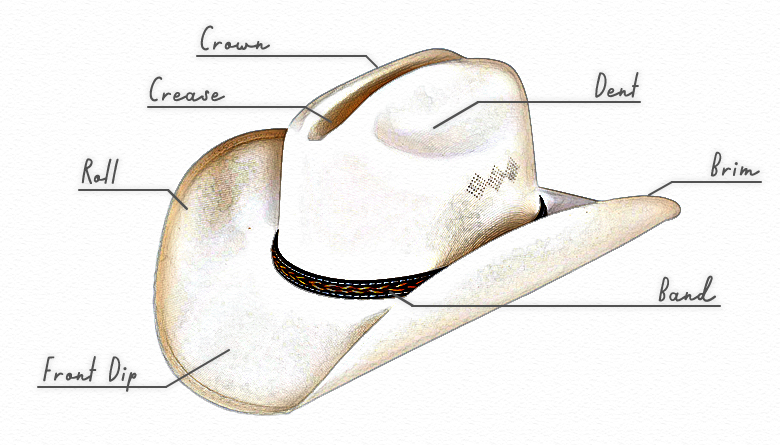 Components of a Cowboy Hat:

Crown: The dome-like part of the hat that fits around the head. The height and shape of the crown can vary.

Brim: Also known as a bill. The ledge of the hat that extends from the bottom of the crown. Significantly wider than the crown, the bill provides shade and protects the face from the sun.

Crease: A narrow groove at the top of the crown that extends from the front to the back. If a cowboy hat doesn’t have a crease, it is called a ten-gallon hat, and the wearer can manipulate the crown’s shape to their preference.

Dent: The symmetrical notches on both sides of the crown that run perpendicular to the crease. Originally, a cowboy hat’s crown didn’t come with dents. Instead, they naturally formed over time and wear. Today, modern-day cowboy hats incorporate dents into the design.

Front Dip: Formed when the brim has a mix of flat and rolled edges, the front dip is the center of the brim that arches down towards the face. This dramatic drop is perfect for tipping one’s hat.

Flange: The brim’s arch and bend from front to back, which defines the hat’s overall shape.

Roll: The curved-up shape of the brim’s sides. The roll creates the flange of the hat.

Band: A strip of fabric, ribbon, or cord that wraps around the base of the crown. A stylistic element, bands often feature ornate embellishments, buckles, and feathers.