Robert Taylor might not have seemed a likely Western star initially. The MGM leading man shared a problem that few actors but many actresses have to deal with: he was so pretty that, like Jean Harlow before him and Marilyn Monroe after, people didn’t take him seriously. Watching 1936’s Camille, fans argued over whose eyelashes were longer— Greta Garbo’s or Robert Taylor’s. With 1939’s Lady of the Tropics, moviegoers complained that they couldn’t tell Taylor from costar Hedy Lamar. The Nebraska lad, born Spangler Arlington Brugh, had to grit his teeth and smile.

He’d planned to follow in his father’s profession of medicine, but while studying at Pomona College in Southern California, he became involved in local theater groups— his looks got him lead roles—and in 1934, soon after graduation, an MGM talent scout signed him up, for a starting weekly salary of $35. He began with a good role in a Will Rogers comedy, Handy Andy.

Metro kept him busy with four movies in 1934, seven in ’35—but he wasn’t exactly getting rich. “I got $35 a week, and my mother, grandmother and I had to live on it. There was [an] awful night when I realized we had one thin dime in the world.” Knowing they couldn’t survive on that paltry income, Taylor figured he’d do better as a salesman. “In the morning I went to (then-studio President) Mr. Louis B. Mayer and asked him to release me from my contract.” Instead, Mayer boosted his salary to a whopping $59 a week. Believed throughout his career to be the lowest-paid major Hollywood star, nonetheless, “For 17 years it was Mr. Mayer who guided me, and I never turned down a picture that he personally asked me to do.” Maybe that’s why Taylor was under contract to MGM for 25 years—two years longer than Clark Gable.

“It’s a big help to an actor if people like to look at him, but it has nothing to do with acting.” He learned acting from the director of Camille. “George Cukor told me what to do. He acted it, and I just copied him, and out came a good performance. You show me what to do, and I’ll do it.” The studio cast Taylor not only in romantic films like Magnificent Obsession and The Gorgeous Hussy, but as a boxer in The Crowd Roars, and as a German soldier in Three Comrades. 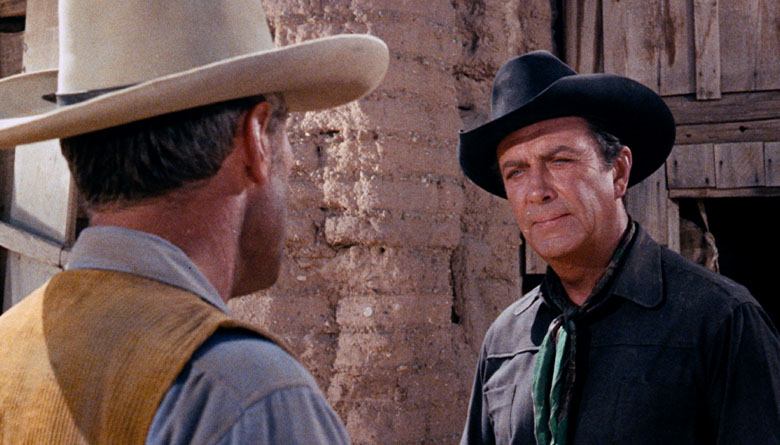 In 1939 they finally put him in a western. Stand Up and Fight’s unusual plot was a perfect fit for Taylor. Set in pre-Civil War Maryland, he plays the aristocratic dandy son of a wealthy family who loses everything and lands a job spying on a stagecoach outfit that’s suspected of running slaves. His adversary, slovenly Wallace Beery, is a hilarious contrast to Taylor.

A year later, Taylor worked for weeks perfecting his left-handed gun draw. His unlined face fit perfectly for the title character in Billy the Kid, despite the fact that he was nearly 30, and Billy died at 21.

Taylor had become interested in flying while playing a pilot in 1940’s Flight Command. He bought a plane and became a pilot. When war broke out, Taylor joined the Navy, becoming a lieutenant in the Naval Air Corps, and trained pilots. This would be the only time the actor went behind the camera, directing nine military training films, and narrating many more.

After the war, in addition to costume epics like Quo Vadis, Ivanhoe, and Knights of the Round Table, which Taylor dismissed as “iron jock-strap movies,” he took on leads that were darker, playing antiheroes and downright villains in films noir like Undercurrent, High Wall, The Bribe, and Conspirator. 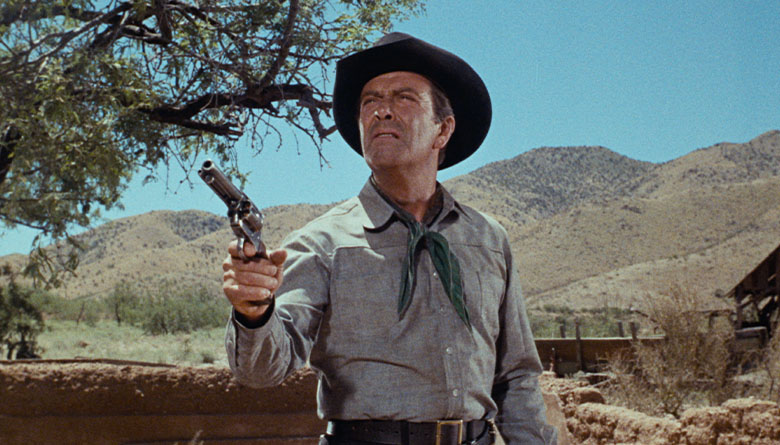 It would be nearly a decade after Billy, 1950, before Taylor would make his next Western, Ambush, from a Luke Short story. His face held a new maturity, and what seemed like arrogance as Billy the Kid felt now like confidence, gravitas. He’d soon be making his best Westerns, with the best filmmakers in the business. For Anthony Mann, he gave one of his most unexpected—and convincing—performances as a Shoshone Civil War hero who is confronted with deadly racism in Devil’s Doorway. Taylor said, “I admired the characterization because of the fact that the Indian, previously considered the ‘heavy’ in early Westerns, is a regular guy. For once he gets a chance to tell his side of the story.”

In 1951, for director William Wellman, Taylor gives what may be his best performance, as the reluctant wagon master to a bevy of mail-order brides in Westward the Women. What would have been ‘cute’ in less skilled hands is a remarkably realistic tragicomedy, with Taylor driving the women piteously, hoping that maybe half of them will survive.

This was followed by Ride, Vaquero!, Many Rivers to Cross, The Last Hunt, and The Law and Jake Wade. Taylor is still handsome, but tougher-looking than ever here, with squinty eyes, lined forehead, and downward lines in the corners of his mouth. 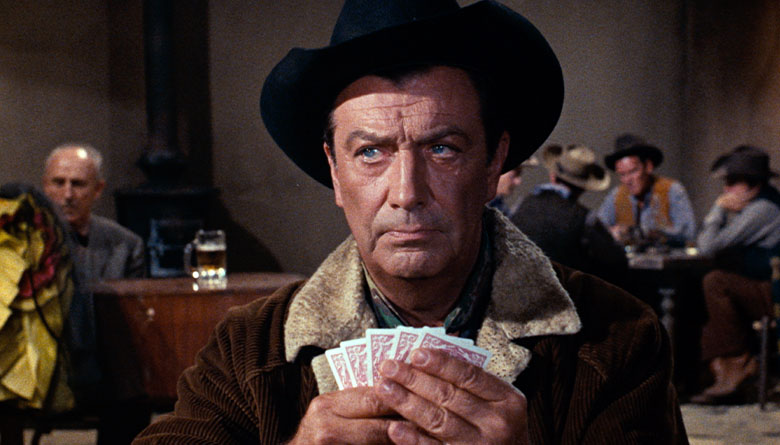 In 1959, Taylor is The Hangman, actually a lawman who’s received that nickname for never bringing anyone back alive. His character, and the story, are so tough that his lure to get Tina Louise to turn in her boyfriend is, in fact, an offer to get her out of her job in the daily hell of a laundry—and into a brothel!

In 1963’s Cattle King, successful rancher Taylor is framed, to make it look like he’s cutting his own fences, by competing cattleman Robert Middleton. Worse, his fiancé, Joan Caulfield, is the sister of Middleton’s drunken flunky, William Windom.

In 1965, Taylor made his only Western away from MGM, Savage Pampas, a film Metro never would have made. Set in Argentina, and shot in Spain, it plays like a Spaghetti Western version of Westward the Women. Instead of transporting mail-order brides, he’s delivering prostitutes to a faraway fort to stop the soldiers from deserting! And—spoiler alert—when soldiers and soiled doves hold up in a church, surrounded by a greater force of Indians, Taylor saves the day by breaking their will to fight—in a ruthless and vicious manner!

1966’s Return of the Gunfighter was an elegant closing chapter to Taylor’s Western feature career. Retired gunman Taylor befriends young hothead Chad Everett, and together they come to the aid of Ana Martin, a young Mexican woman whose family has been slaughtered for their cattle ranch.

But that would not be the end of Robert Taylor’s Western career. With his weathered looks perfect for the job, he took over from friend Ronald Reagan as the host of the long- running series, Death Valley Days.

Sadly, a 5-pack-a-day smoker, Taylor would die of lung cancer in 1969 at just 57. He was posthumously inducted into the Cowboy Hall of Fame the following year. Then California Governor Ronald Reagan said in his eulogy, “He was more than a pretty boy, an image that embarrassed him because he was a man who respected his profession and was a master of it.”