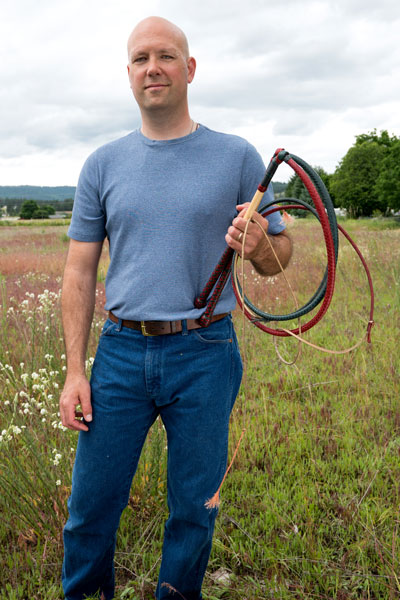 As a young child, Joseph Strain was awestruck by the dashing, black-clad, masked outlaw who stood up for the common man—Zorro! Joseph was not only impressed by the myth of the justice fighter, but also with his skill at wielding and cracking a bullwhip. Inspired, Joe purchased an old Mexican whip and worked on his technique, learning to crack the whip by watching another action film, The Man from Snowy River, but he spent as much time repairing the worn whip as cracking it. So he set out to make a better whip, one that was easy to handle, sturdy and pleasing to the eye.

His first step: research. He consulted David Morgan’s book, Whips and Whipmaking, and later learned from the master himself. Soon, Joe’s skills improved substantially. Now, with more than 22 years of experience, the Master Whipmaker’s whips are in high demand—and as the circle of life would have it, he’s “reunited” with his childhood hero. His work has appeared in The Mask of Zorro and The Legend of Zorro. Other films featuring his whips include, Shanghai Noon, Shanghai Knights, Catwoman, Indiana Jones and the Kingdom of the Chrystal Skull and Iron Man 2. He also makes whips for theme parks and stunt shows worldwide, and creates custom whips for stuntmen, entertainers and working cowboys. One might even catch him performing at charity events and on television shows.

In 2010, Joseph won First Place at the World Leather Debut with a 24-plait, red and black bullwhip.

What drew you to your chosen craft?

I grew up watching Disney’s Zorro and was fascinated with the whips. I acquired my first whip at age 10 and learned to crack it by watching the movie The Man From Snowy River. I had horses and spent many hours in the saddle riding through the Rathdrum mountains in my early teen years. When I was 13 I started checking books out of the local library on leather braiding to repair and maintain my first whip. About that time I borrowed $50 from my parents to buy my first bit of leather and give making my own whip a try. I started making a few whips and selling them on consignment at local saddle shops. When I was 16 my Dad drove me over to Seattle to meet David Morgan who made the whips for the Indiana Jones movies. David was very generous with his time and spent the day showing me his collection of whips and teaching me the fundamentals of the Australian method of leather braiding; cutting, paring and plaiting.

I enjoy working with my hands, the opportunity to be creative and the challenge every project presents. Working with a natural product (leather) makes each whip a unique challenge. It’s the constant drive for perfection in each whip, the endless possibilities of design and the realization that there is always something more to learn that makes me want to do more and more.

I think people would have a greater appreciation for the common things that they use every day if they understood the skill it takes to design and produce something whether it is mass-produced or handmade.

Almost any tool or item can be mass-produced, but making it by hand can turn that tool or item into an individual and unique work of art. Whips have been mass-produced and even machine made in the past. Some types still are. But machines can’t see and remove the natural scars and flaws in leather that is required to do really fine work. A machine can’t tune the weight, taper and balance of a whip while it is being made to make a whip that cracks with only the slightest effort.

What does the future hold for your type of work?

In many parts of the world a whip is a tool used daily by stockmen, cowboys and drovers. Movies have also brought about a resurgence in the craft. In the Australian method of whip making, which is what I do, it was generally held that it took five years of hard work to make a first-class whip maker. There are still a good number of inquisitive and creative people with enough perseverance that are keeping the “Art of Whip Making” alive!