Audie Murphy stars in this pulse-pounding Western! A gang of claim jumpers comes to town, taking over mines and murdering anyone who gets in their way. Now, it’s up to Marshal “Lightning” Tyrone and his young, hotheaded deputy, “The Silver Kid,” to take the killers down.

This action-packed Western adventure features Audie Murphy as The Silver Kid – an orphan with a grudge…and a gun.

A gang of gold mine claim jumpers has moved from town to town, taking over mines and leaving a path of destruction and death in their wake. They vowed to never leave any witnesses behind, but after they murder young Luke Cromwell’s father, Luke escapes…

Meanwhile, the local marshal of Silver City, known as “Lightning” Tyrone, has his own vengeance in mind. The gang killed his best friend, and he aims to see them all die. However, after he loses the use of his trigger finger in a shootout, he knows he can’t do it alone. So now, he deputizes Luke Cromwell – known as “The Silver Kid” – to help him bring down this ruthless band of murders. 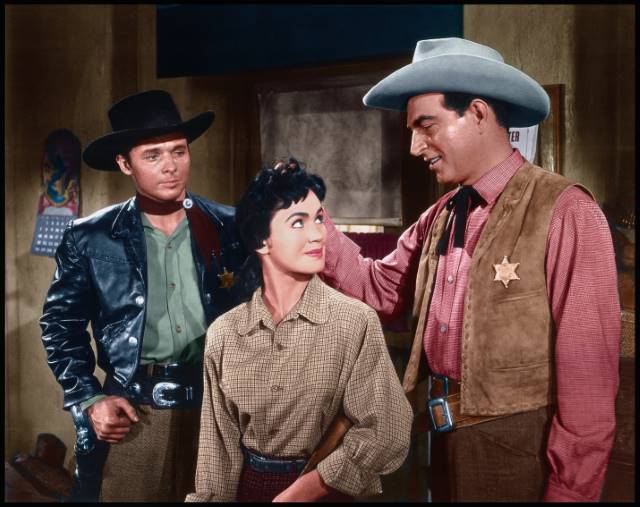 However, their alliance is an uneasy one. The marshal falls for a beautiful new woman in town, who may or may not have his best interests at heart. Meanwhile, The Silver Kid is not immune to romance either, and he has his head turned by a woman as well.

Battling agendas, simmering romances, and questionable motives…will the marshal and Cromwell accomplish their goal? Only one thing is for sure: The Silver Kid is a hothead with an eagle eye, lightning fast reflexes, and a score to settle.

The gang and the gunslingers will definitely meet. But when the bullets stop flying and the dust starts to settle, will The Silver Kid still be standing?