Rancher Owen Merritt wants to live in peace, but cattleman Will Isham won’t let him. First, Will steals Owen’s girl…and now he wants Owen’s land! Fists will be thrown and bullets will fly as Owen faces the fight of his life!

Owen Merritt wants to run his ranch in peace, but wealthy Skull Ranch owner, Will Isham won’t let him. Isham, a greedy, jealous, and ambitious man, wants to seize all of the land around his own ranch and push everybody—especially Merritt—out. 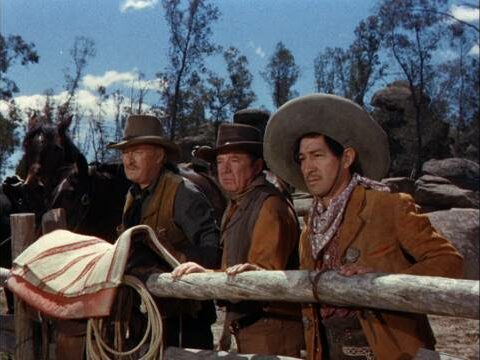 Skull Ranch’s new foreman, Fay Dutcher, offers to treat everyone at the town saloon to a drink to celebrate the upcoming nuptials. Many of the locals want no part of it, and Owen refuses to lift a glass to Isham.

Disgusted, Owen leaves the saloon and runs into Laure. He asks her if she really wants to marry a man like Will Isham. Yes, Laure reassures him – that’s exactly what she wants – because she likes Isham’s money, and she’s tired of waiting for Owen.

That night at the wedding, Isham meets secretly with Pay Lankershim, ranch owner of the parcel of land that separates Isham’s Skull Ranch and Merritt’s Christmas Creek Ranch. Isham forces Lankershim to sell to him and sets his sights on Merritt’s land next.

Meanwhile, Dutcher’s hired gun, Hugh Clagg, sets his eye on Owen’s pretty neighbor, Nan Melotte. During the wedding, Clagg begins to force his attentions on her.

The next day, Nan brings her tiny herd of cattle to Owen’s ranch to join his drive to market and warns him about Isham’s intentions. Owen tells her not to worry; he isn’t looking for trouble.

But trouble has found him anyway. Dirty tricks and deadly intentions leave ranch hands on both sides killed, while jealousy and misunderstandings end in fist fights and bullets flying. When Owen is wounded at Skull Ranch, Nan risks her own life to save him.

Now, Owen better rest up and get ready for the fight of his life – because the next time trouble comes calling might be the last!