When outlaw Rem Anderson is seriously wounded after a bank robbery gone bad, his cohorts and his girlfriend take off, leaving him for dead. But Rem survives, and his year in jail gives him lots of time to think. Now, free, he has one thing on his mind—revenge.

As much a thriller as it is a Western! James Arness and Angie Dickinson star in this suspenseful film produced by Robert E. Morrison, John Wayne’s brother for Wayne’s Batjac Productions!

Outlaw, Rem Anderson wants to settle down on a ranch with his longtime love, Janice, so he joins up with notorious criminals, Matt Rankin and Ralph Farley to pull off a big bank heist that will ensure they all live comfortably for quite a long time. But robbing the Palace City Bank turns out to be a more difficult task than the men anticipated, and the job quickly goes south. Matt shoots a teller, and in the gunfight, Rem is seriously wounded. With a posse hot on their tail, and Rem not able to ride up to speed, Matt and Ralph kidnap Janice, take off with the money and Rem’s horse, leaving Rem to his own fate. 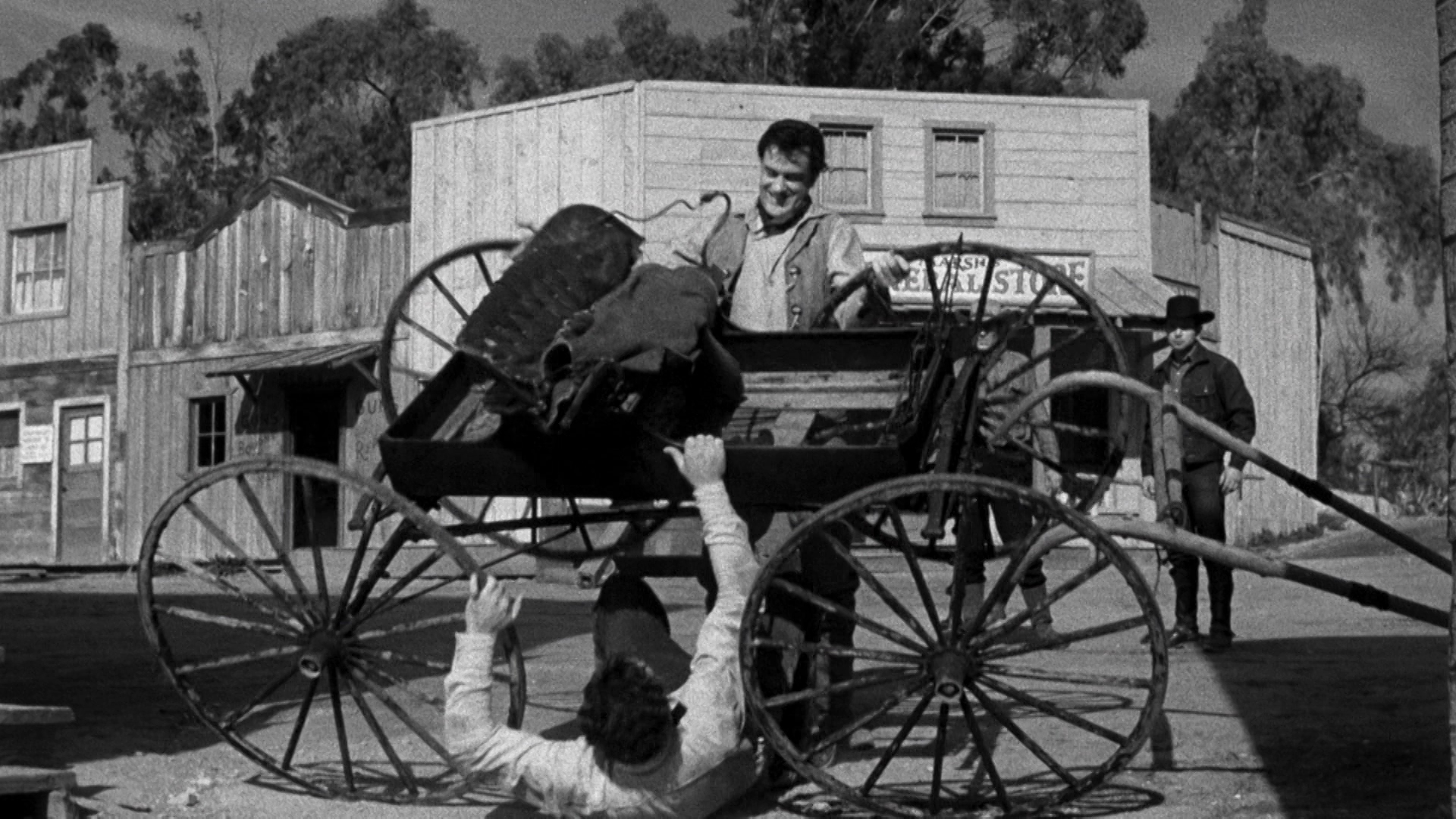 In short time, the posse comes upon Rem in poor condition, and his partners in crime nowhere in sight. They take him to the authorities, where he refuses to give up the names of his cohorts, and a judge sentences him to a year in jail—if he lives. Time passes, and Rem slowly recovers, still not ratting out his partners, not out of loyalty, or the hopes that he’ll retrieve his portion of the heist, but because he’s had a lot of time to think behind bars, and now the only thing on his mind is revenge. When he gets out, he embarks on a meticulous hunt for his betrayers, including, Janice, the woman he thought loved him.

Clues lead him to a nearly deserted town on the Arizona-Mexican border, and sure enough, the first familiar thing he sees is his horse. Soon he discovers Matt owns a saloon with Ralph in his employ, and the ultimate heartbreaking betrayal—Janice has now taken up with Matt.

Rem bides his time, but when a brutal fight between him and Ralph ends with Rem the victor, aging Sheriff Morton warns Rem he won’t tolerate such lawless behavior. On alert, Matt fears for his life and he offers gunfighter, Billy Deal a small fortune to kill Rem. Now a deadly game of cat and mouse begins. And in a searing moment of truth, Rem must decide what kind of man he wants to be.

How the West Was Won: Plot Twist

Is it a Macahan Story…or Not? From robberies to rustling, rivalry to romance, the Macahan clan is never at a loss for adventure! But... READ MORE