When it comes to Hollywood’s Golden Era, John Wayne was one of the biggest box office draws of all time. Tall, rugged, and handsome, John Wayne personified the strong Hollywood leading man.

Marion Robert Morrison was born on May 26, 1907, in Winterset, Iowa to Mary (“Molly”) and Clyde Leonard Morrison. He was the oldest of two children, with a younger brother named Robert Emmet, born in 1911. Around 1914, the family moved from Iowa to California, and in 1916, they moved again to Glendale where his father worked as a pharmacist.

When Marion was young, he had an Airedale Terrier named “Duke” – and his dog went everywhere with him. One of his neighbors started calling the dog “Little Duke” and Marion “Big Duke.” Since Marion preferred “Duke” to his given name, he let the nickname stick.

In high school, Duke was the president of the Latin Society, a contributor to the sports column in the school newspaper, a player on the 1924 champion football team, and a member of the debate team.

After graduation, he went to the University of Southern California on a football scholarship but lost it after getting injured. Thankfully, his coach helped him find work by calling in a favor. He asked director John Ford and actor Tom Mix to hire Duke as a prop boy, stunt man, and extra.

During the 1920s, Duke established a lifelong friendship with John Ford that would ultimately bring him stardom. However, his early roles were mostly limited to bit parts. In 1930, Director Raoul Wash discovered Wayne moving furniture and gave him his first starring role in The Big Trail. That’s when the Studio and his Director decided to change his screen name to John Wayne.

John Wayne’s biggest breakthrough finally came in 1939 when he was cast in John Ford’s classic movie, Stagecoach. John Ford declared then that Wayne would become a huge star because of his “everyman” appeal…and he was proven right as John Wayne became a top box office draw for the next four decades.

When World War II broke out, Wayne wanted to enlist, but Republic Studios didn’t want to lose their only A-list box office star. He was threatened with a lawsuit if he walked away from his contract—and Republic even went so far as to request John Wayne’s future deferments.

Although Wayne did apply to serve in the Office of Strategic Services (OSS, now known as the CIA), the acceptance letter went to his former wife’s home, and she never told him about it. So, instead, he spent his time touring U.S. bases and hospitals in the South Pacific in 1943 and 1944 with the USO and even carried out a mission to assist the OSS, for which he received an OSS Certificate of Service.

During the 1940s, Wayne’s career took off as he starred in Dark Command, Fort Apache, She Wore a Yellow Ribbon, Flying Tigers, The Fighting Seabees, Red River, and Sands of Iwo Jima, for which he was nominated for an Academy Award for Best Actor.

In the 1950s, John Wayne was at the height of his popularity, starring in such huge hits as Rio Grande, The Quiet Man, The Searchers, The High and Mighty, Rio Bravo, and The Horse Soldiers. He decided to create and run his own company, Batjac Productions, through which he produced many films for himself and other stars, including Randolph Scott and James Arness. 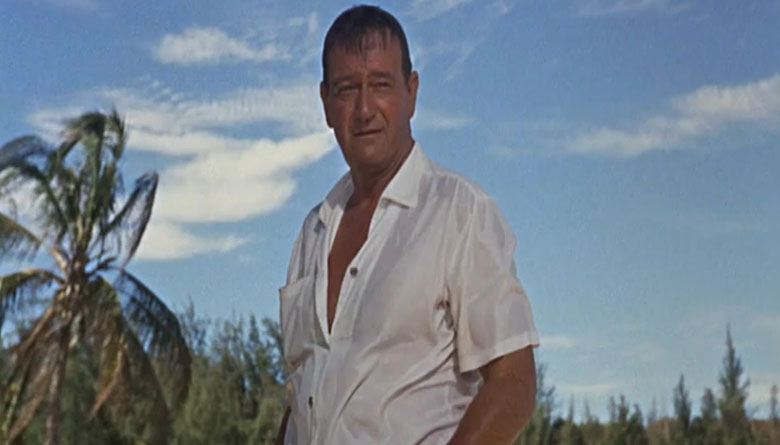 The Duke continued to enjoy success in the 1960s. He directed, produced, and starred in The Alamo and was nominated for an Academy Award as producer for Best Picture. Some of his biggest hits included The Comancheros, The Man Who Shot Liberty Valance, Hatari!, The Longest Day, How the West Was Won, The Greatest Story Ever Told, Donovan’s Reef, McLintock!, The War Wagon, El Dorado, The Green Berets, and Hellfighters.

But his biggest triumph came in 1969 when he starred in True Grit as Rooster Cogburn. Finally, John Wayne was nominated for– and won – the Best Actor Oscar at the Academy Awards.

Wayne was married three times and had seven children. With Josephine Saenz, he had Antonia, Melinda, Michael, and Patrick; with Esperanza Baur, he had no children; and with Pilar Palette, he had Ethan, Aissa, and Marissa.

His marriage with Esperanza became stormy when she accused him of having an affair with his Angel and the Badman co-star, Gail Russell (both Wayne and Russell denied this). Rumors always swirled around Wayne and his leading ladies, and no wonder why:  John Wayne was surrounded by the most beautiful actresses in Hollywood, including Marlene Dietrich, Maureen O’Hara, Merle Oberon, Patricia Neal, Claire Trevor, and Lauren Bacall. 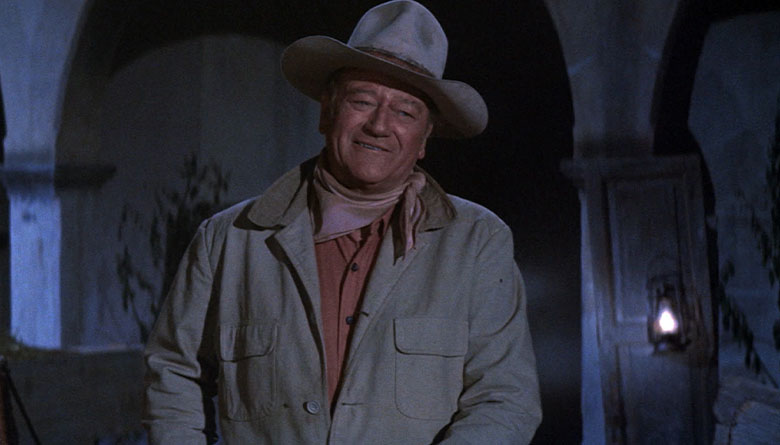 The 1970s saw The Duke starring in Chisum, Big Jake, The Cowboys, and Rooster Cogburn. But his last role may have been one of his best:  J.B. Brooks, a notorious gunslinger, in The Shootist. The Shootist was named one of the 10 Best Films of 1976 by the National Board of Review and was nominated for an Oscar, and a Golden Globe.

Wayne lost a lung and two ribs to cancer in the 1960s but was declared cancer-free by 1969. Unfortunately, the disease returned in 1978 when he was diagnosed with stomach cancer.

Although he battled the disease valiantly, John Wayne died on June 11, 1979, at the UCLA Medical Center.