Marilyn Langley & Jake – Winners of the INSP DOGGONE CUTE PHOTO CONTEST – As the winners of the contest, Marilyn has received a special INSP goodie bag, and Jake is the feature of this article, written by his human “Mommy,” Marilyn.  Enjoy!

Jake is our little miracle dog.  His parents are named Josh and Dakota.  When we bred them and took Dakota for a checkup, the vet said she wasn’t pregnant. He even ran a blood test which also came back negative.  We were very disappointed because we wanted a male pup to carry on Joshua’s bloodline. So we hoped for better luck next time.

t our business.  In December 2006, I noticed that Dakota had something unusual when I was rubbing her belly.  I felt something move.  I asked Gerald to feel her also while I went to get my stethoscope.  I listened, and I could hear the fast heartbeats of puppies!

She gave birth on December 26.  Gerald was home with Dakota when she went into labor.  The first pup was a female and then Jake was born.  She only had two pups, a male and a female just like we prayed for.

Forward to the October 2011…As our usual routine, my husband and I liked to sit outside in the evening and share our day with each other, watching Jake, Josh and Dakota play.  I had my camera because my hobby is photography and those three were always doing something cute.

Jake, like most Golden Retrievers, is a very loving dog.  He put his head on Gerald’s thigh and, on a whim; Gerald took of his hat, putting it on Jake’s head.  I snapped the photo.  That is the photo that won the DOGGONE CUTE PHOTO CONTEST from INSP. 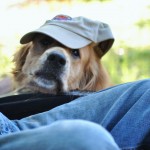 Jake has turned out to be an even bigger blessing to me than just a pet.  In February of this year, Joshua, his father passed away.  He was almost 14 years old.  Jake, Dakota as well as my husband and I moped around the house mourning our loss.  Little did any of us know, we were soon to be mourning an even greater loss.

Two months later on April 10th, my husband of 25 years died from complications of cardiac by-pass surgery he had in October of last year.  I came home the evening he died.  Immediately, Jake and Dakota felt my pain.  I petted each of them.  Through my tears, I told them “daddy” was gone and would not be coming home again.

They were accustomed to Gerald not being home, especially over the last couple of years due to his multiple hospital stays so it really didn’t noticeably bother the dogs until the second day.  We own a Dodge Truck with a diesel engine and so does one of our neighbors.  Every time they heard that truck go by the house they would run to the window and look out for daddy.  When they realized that truck wasn’t a signal that “their” daddy was coming home, they stopped going to the window. 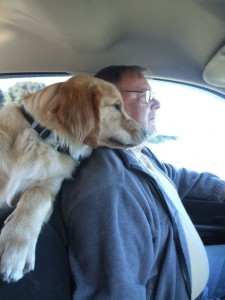 They seemed to be generally unhappy and Jake wasn’t as playful as he usually is.  They didn’t eat very much for a couple of days and every time I let them out they would go to Gerald’s workshop and sniff around and if I opened it up they would go in looking for him.

Well eventually the shock of it all began to wear off a little and the three of us are now in a routine.  Although Dakota is sweet, it has been Jake who has been my greatest comfort.  He will not let me out of his sight when I am home.  I have to watch out because he sometimes lies down by my feet, and I don’t want to step on him.   He lies outside the shower, sits beside me on the sofa when I am watching TV or reading.  He also hops up on the bed at night and we snuggle for a few moments until I tell him good night and then he gets down.  When the alarm goes off he is standing by the bed and when I turn the lamp on, his big brown eyes are staring at me, mouth open making it appear as if he is smiling all the while his tail is wagging.  If I don’t get up immediately he will lay his chin on the mattress by me and look at me until I either get up and or pet him.

Jake picks things up off the floor for me.  He also fetches.  When I tell him it is bath time (for him), he will go sit down in the shower and wait for me.  I know it sounds crazy but I honestly think he understands more words than people realize.  When he wants to bring his wet tennis ball inside, all I have to do is to tell him no, put it down and he usually does it.

Jake can sit on command, stay and also will roll over when I verbally tell him to do so or motion for him to do so.  He loves to shake paws.  Whenever I am working at my desk or eating a meal, he makes sure some part of him is touching my feet or legs.  He likes to do what I call “hold hands.”  When we are watching TV, he reaches over with his front paw and touches my hand until I take ahold of his paw.  Then, he is content and will doze off while I watch TV or read.

I think Jake knows I am grieving and he is trying to show me as much love and attention as he can.  I do know that he has helped me tremendously in the months since my husband died. 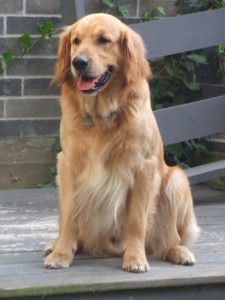 What is Jake’s day like?   Well we have two separate routines.  One is the work routine.  I get up, let them out while I fix my coffee and feed and water them.  Then they come back inside.   Dakota is a sleeping diva.  She usually goes back to the bedroom and sleeps.  Jake sits with me while I enjoy my coffee and read my daily devotional.  Then, he goes and guards me while I am in the shower.  Once I am dressed I will let them out again while I finish getting ready to leave.  He sleeps most of the day while I am gone, and I am sure he watches the birds and squirrels around the bird feeders.  When I get home, he is so excited!  He runs out really fast to do his business.  Then, he’s right back in for some loving.  He spends the rest of the evening with me as I prepare dinner and work in the yards and gardens.  After it cools down, we play fetch and keep away with his tennis ball or one of his many toys.

Secondly, when I am off and at home, he likes to watch the squirrels out the dining room window.  If I see there are a few out there, I will motion for him to come with me to the laundry room.  I ease the door open and let him out.  He never catches one but has come close a couple of times.  He sure scatters them.  If I have to take the garbage out or go to the work shop, he is right with me.  We have a fenced in backyard.  If I go to the front yard to refill the bird feeder or tend to the flower garden, he will stand at the gate and whine until I come back, even though he can see me the whole time.

Both dogs love to go for a ride in the truck.  As a matter of fact, in May 2007 Gerald and I set off on a cross country tour with our fifth-wheel trailer and the dogs.  Jake was barely six months old.  We had to pick him up and put him in the truck. 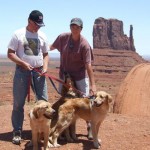 I work Tues-Friday, with every other Saturday on call but I make it a point to find some time to take them for a ride even if is just around the neighborhood.   Jake likes to lie across the center console and look out the window.

Jake and Dakota play while I do chores around the house and outside.  But there is a serious side to Jake also.  He has become a great watch dog which is kind of unusual for a Golden since they are so laid back.  If a stray dog or deer wanders in the yard at night he will bark and growl.  If someone he doesn’t know comes to the door he will also issue a warning to me.  In a way that makes me feel even safer at home alone because I know he is on duty.  I don’t think he would actually bite anyone but his deep voiced bark and growl is enough to ward off any trouble. 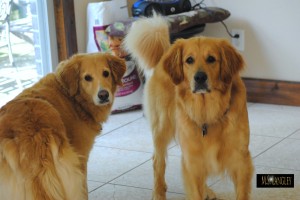 One last thing…  My best friend’s husband passed away last September.  She has been a great help, leading me through the processes and business one has to take care of when a spouse dies.  Pulling on her recent experience, she has also been a great source of understanding.  The one thing she didn’t think to tell me was about coming home from work on the first day of returning from work to an empty home.

I came up our street and saw Gerald’s truck parked in the driveway.  Then, it hit me hard knowing he would not be waiting for me inside.  I cried so hard that Jake got on the sofa beside me and literally licked the tears from my cheeks.  He moved his paw and wanted to hold hands.  We sat like that for about thirty minutes until I regained my composure.  I will never forget the love he showed me that day.

Jake makes me laugh with some of the silly things he does, like walk around with a tennis ball hanging out of his mouth.  He takes the ball, drops it and plays by himself.  He will lay it down on the floor.  Using his nose, he rolls it in my direction.  When I talk to him, he really appears to understand everything I say.

Jake’s story isn’t just a single story but the story of two people who loved three very special dogs very much.  Since Gerald and I were childless, those three dogs became “our kids.”

I became a fan of INSP because of the programming, good, clean and moral.  My late husband (The G-Man as we called him) and I used to watch it every night.   I love The Waltons, and he loved to watch The High Chaparral also.  We used to watch the Saturday line up all day.  I still do.  I turn the TV on while I am doing chores.  Thank you INSP for being a part of bringing our family together.