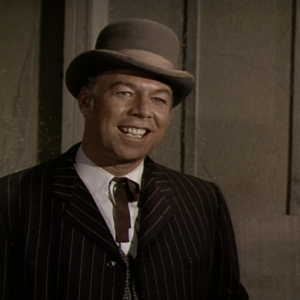 He was a big man with a big voice, and because of his looming stature, was often cast, early in his career, as the tough guy in Westerns.

Born on February 18, 1925 in New York City to parents who were no strangers to the spotlight (his mother was a ballet dancer and father, a musician), one would imagine Kennedy had show business in his blood. Indeed, he made his stage debut at age 2 and was a radio disc jockey at 7. But it would take more than a decade before the adult Kennedy found his way to Hollywood, and it would be the United States Army that nudged him in that direction.

Like many young men during World War II, Kennedy enlisted in the Army at age 17. He served in the infantry in Europe and fought in the Battle of the Bulge. After the war ended, he reenlisted, earning a commission as an officer. Born with a spinal curvature, he’d endured many hospitalizations during his stint in the Army and finally retired, with the rank of Captain, after 16 years’ service. 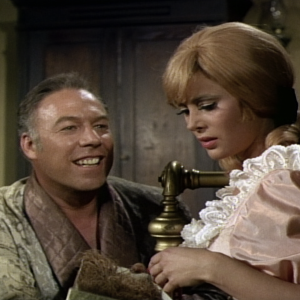 How did the Army push him west to Hollywood? After the war, he was part of the Armed Forces Radio network in Germany, and later in Japan and Korea, and finally, he was the military advisor for The Phil Silvers Show, a popular 1950s sitcom about a crafty Sergeant set on a Kansas Army base. It was then he caught the acting bug, and ended up playing a few bit parts on the show. He moved to California in the late 1950s and was soon before the camera.

Kennedy’s Hollywood career spans more than 50 years, with numerous awards including an Oscar. INSP fans will recognize him in starring and support roles in many of our shows, including Bonanza, Daniel Boone, The Big Valley, The Virginian, and featured movies, Shenandoah and Cahill, United States Marshal.

In a Los Angeles Times article, Kennedy’s grandson Cory Schenkel, who lived with the actor, describes Kennedy as “just a quiet family man” who “always put his family first and was always happy to take time out to talk to fans. He never turned a fan away, just enjoyed making movies and bringing joy to other people.”