When New England sea captain, James McKay, moves west to marry a rancher’s daughter, he becomes embroiled, not only in a long-standing, deadly feud over water rights, but in an unexpected, and painful love triangle.

In New England, a wealthy, retired sea captain, Jim McKay, meets and falls in love with stunning Texan Pat Terrill. Pat is the daughter of a land baron rancher, and after she and McKay become engaged, she returns home, and waits for him to move west to settle down in marriage. When he arrives, however, it’s clear this eastern “gentleman” may not be cut out for the rough Wild West life where disputes are settled with, sometimes, swift and brutal frontier justice. In fact, his pacifist beliefs draw ridicule from the locals, who mock him for being a coward, less than a “real” man.

Then there’s Pat. Under her father, Major Henry Terrill’s influence, she is no longer the charming lady who functioned so beautifully in polite New England society. She eagerly sides with her father’s opinions and aggression, often belittling McKay for his low-key ways of dealing with conflict. Her attitude fuels ranch foreman, Steve Leech, whose immediate dislike of McKay is equal to his romantic feelings for Pat. 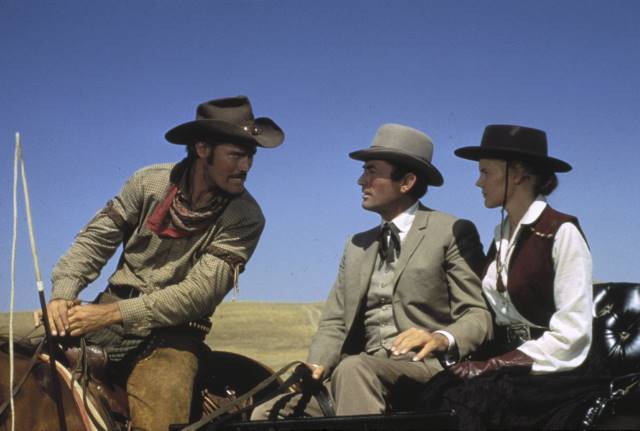 But McKay’s troubled love life may be the least of his problems. Now, soon to be a part of the Terrill family, he is thrust directly in the center of a deadly feud. The Terrills have been fighting the crude Hannassey clan, led by patriarch Rufus Hannassey. Though they have an expanse of land that they ranch, the Hannassey’s are a poor lot, living in shacks. The Terrill’s and Hannassey’s clash, often violently, over water rights at the Big Muddy, a farm owned by Pat’s friend, schoolteacher, Julie Maragon. Julie has compassion for everyone involved, and doesn’t take sides. She offers the water on her land equally to both families. But their combative roots run deep, and the Terrill’s and the Hannassey’s each want to run the other out. It’s a life and death situation, because if one clan persuades Julie to hand over the rights, the other family would not survive.

McKay thinks he has the solution. He offers to buy the land from Julie as a gift for Pat, but when she finds out he intends to continue permitting the Hannassey’s to water their cattle on the Big Muddy, she breaks off their engagement. Now the war between the families escalates, with Jim and Julie in the crossfire. Each act of vengeance between the clans is retaliated with equal measure. When Hannassey commits the ultimate evil deed, Jim must decide if the time for being a “gentleman” is over.