Stars Maureen O’Hara, Macdonald Carey, and Will Geer! Jim Bowie tangles with a fiery but beautiful bar owner and greedy settlers determined to steal land and silver from the Comanches.

Starring Maureen O’Hara, Macdonald Carey, and Will Geer! This Western was filmed in vivid Technicolor, on location in the spectacular Canyon area of Arizona.

In the 1820s, frontiersman Jim Bowie (creator of the Bowie knife) comes to the Mexican-controlled area of Texas, where he is attacked by Comanches. Dan’l Seeger, a former congressman, saves Jim from certain death. However, Dan has been shot in the shoulder, and Jim helps remove the bullet. Both men are promptly taken prisoner by the Comanches.

They are brought back to the Comanche village for execution, but are spared by Quisima, the elderly tribal chief. Quisima is charmed by Jim’s forthright speech and his interesting knife, and Jim is happy to teach the tribe how to make it themselves. In return, Quisima promises to allow the United States to use his land to mine for silver once the treaty is renegotiated. 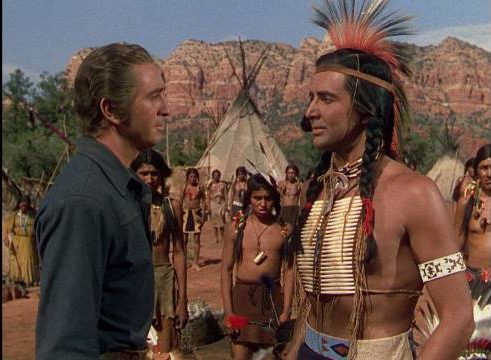 Once they head out, Dan confesses to Jim that he was sent there to ratify the very same treaty, but it was stolen from him! So, the pair heads to the nearby town of Crooked Tongue where Jim will pose as a wealthy silver buyer – and with any luck, flush out the thief.

Before long, they end up in the local saloon, which is owned by Katie Howard. Katie not only owns the saloon, but the local bank too! She’s the kind of woman who can run a business, not lose her head when Indians attack, and beat any man at poker. Plus, she’s ravishing!

However, fiery Katie dislikes Jim and tangles with him – and when Dan recognizes her perfume and accuses her of stealing the treaty, a barroom brawl erupts!

Although Katie is mad, her brother, Stacey, tells her to use her feminine ways to romance Jim. Stacey hopes Jim will buy lots of silver someday.

But the more time Katie spends with Jim, the more she genuinely likes him. He tells her that the treaty will bring prosperity to the town, and she wants to help him keep his promise to Quisima and deliver the treaty.

Jim soon realizes that the locals in Crooked Tongue – led by Stacey – intend to steal the silver from the tribe. Now he wonders: can he save the tribe from the greedy settlers – and trust Katie at all?

All Dressed Up and Everywhere to Go! That’s our Mo, on the go! And always dressed for the occasion. We know Maureen O’Hara has... READ MORE