The Duke and The (Younger) Duchesses
By Henry C. Parke

In 1952, John Wayne, a leading man from 1930’s The Big Trail, to his final movie, The Shootist, 46 years later, started Batjac Productions to take more control of his films. Blessed with an uncanny understanding of his image, he always played tough guys, but he always played his age. He knew the box-office appeal of having young beauties in his movies, but he was savvy enough to not cast them as his romantic interest. In his later films, the work of three young actresses is particularly memorable.

Katharine Ross starred with John Wayne in 1968’s The Hellfighters, between her Oscar-nominated performance in The Graduate, and her unforgettable portrayal of Etta Place in Butch Cassidy and the Sundance Kid. Wayne played a fictionalized version of oil-rig firefighter Red Adair, and 28-year-old Ross played his daughter. 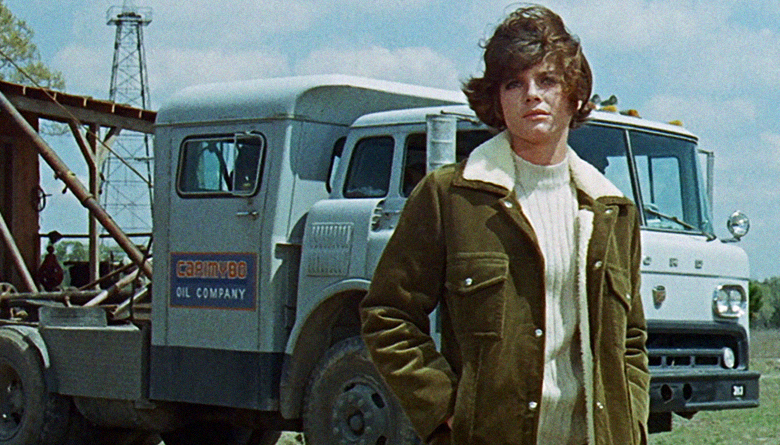 Directed by frequent Wayne-collaborator Andrew V. McLaglen, it’s ironic that Wayne chose Ross to star in one of his few non-westerns of the period because, Ross told me, “I started riding when I was seven.” In fact, her first feature, also directed by McLaglen, was the James Stewart Western Shenandoh. “I really got that because of the Gunsmoke I did that Andy McLaglen directed.”

How did she like working with Wayne? “It was great.” But not without its challenges.  “A piece had been done in Life Magazine on me. I knew I was going to do Hellfighters, and I made some comment about, well, I hope to do better things than this. Something really stupid. And when they were doing the wardrobe tests, John Wayne nailed me with that. ‘What do you mean, something better?’”

“He was very nice to me. It was fun to work with him. He could be very tough on people, if he didn’t feel they were doing their job well or trying.”

Wearing his producer’s hat as well as the ten-gallon one, Wayne was already lining up his next picture. He’d read a not-yet-published novel which he thought would make a great movie, and asked Ross to read it.

Ross continues to act, most recently in the romantic comedy Attachments, and has been married to fellow Western legend Sam Elliot since 1984.

At age 15, Brazilian-born, New York raised Jennifer O’Neill began a modeling career, to earn enough money to buy her own horse. She did so much better, becoming an internationally famous cover-girl and model. Howard Hawks was set to direct Rio Lobo, saw O’Neill in an advertisement, and said he’d make her a star. This was no idle boast: Hawks had famously seen a photo of model Betty Bacall and turned her into movie star Lauren Bacall. 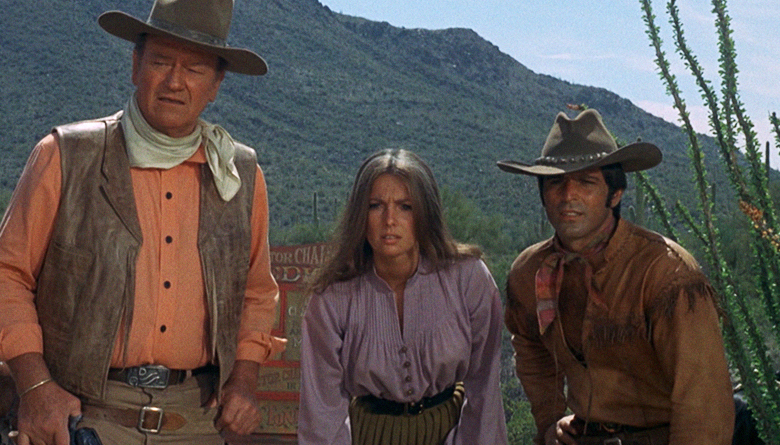 Surprisingly, O’Neill, who’d only done bit parts in films, was not excited at the prospect of costarring with John Wayne. A student at New York’s prestigious Neighborhood Playhouse, she admitted to Fox News, “I was a total snob. I was 21 and he was an icon. But I really wanted to work with Al Pacino. I laugh now, after all these years, at that moment of youth and stupidity. I was lucky enough to have that opportunity to work with John Wayne, and he was everything and a bag of chips. He was always professional, just an amazing man. You did not want to speak politics with him, and you did not want to play cards with him. But [he] was…delightful.”

Although she admits that, “I didn’t think of him as an actor,” that opinion may have changed when filming stopped so Wayne could fly to Hollywood and collect his Oscar for True Grit.

It was a physically difficult shoot for Wayne, who’d lost a lung to cancer, and was still healing from a ligament he’d torn in his shoulder filming 1969’s The Undefeated. O’Neill recalls his trouble mounting his horse; and filming the scene where he carries her up a flight of stairs left him exhausted.

Despite any discomfort, “On the set he was delightful and very giving.” Surrounded by a mostly much younger cast including Jorge Rivero, Chris Mitchum, and actress and soon-to-be studio head Sherry Lansing, “He would always help us whenever we needed it… He wanted to share his knowledge of the industry.” Of all the advice he gave her, “The one thing…that really resonated with me years later: ‘The key to being a good actor is hearing it for the first time. If you ever notice that you’re responding the same way over and over, you’re not present in the moment.’”

O’Neill now lives in Nashville with her ninth husband, Mervin Louque, Jr., devoting much of her time to her equestrian therapy program, helping first responders, at her ranch, Hillenglade.

When Sweden-born Ann-Margret Olsson went to Hollywood, there were two people she desperately wanted to meet:  John Wayne and Walt Disney. She never met Walt, but she well-remembers meeting John Wayne. She told The Oklahoman, “He was so huge, the man was just colossal. I’m 5’ 4 ½”, and when he hugged you, you were totally enveloped into him.” 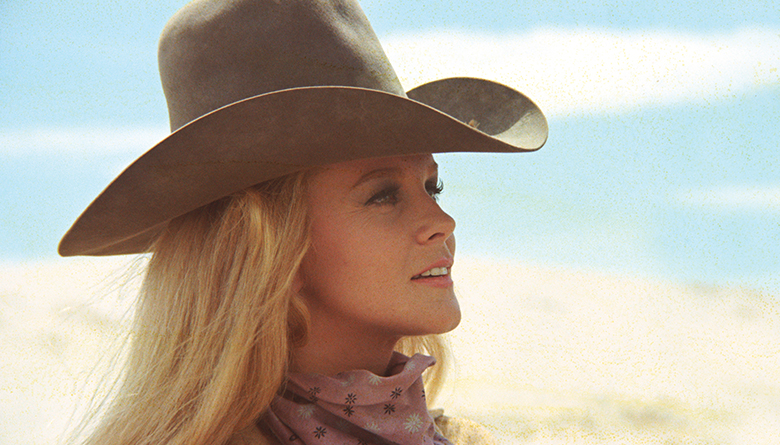 1973’s The Train Robbers was not Ann-Margret’s first western. She’d played Claire Trevor’s role in the 1966 remake of Stagecoach. But in The Train Robbers she had to ride a horse, “and I’m deathly afraid of horses, and the first night, we all had to ride.  Everyone knew how to ride horses except me. It was midnight, and we all had to gallop up to this one line and stop. Once we did it, it was a take. John Wayne noticed I was a little apprehensive. He was drinking mineral water and asked me if I wanted some. He must have seen my hands shaking.”

“We were shooting in Durango, Mexico and my parents came down to visit me,” she told Fox News. “He was so great with my parents. So absolutely welcoming and gentle with them. And anybody who was great to my parents was on a throne in my eyes.”

Wayne was considerate in other ways. Ann-Margret’s performance in Carnal Knowledge earned her a Best Supporting Actress Oscar nomination, and fellow Train Robbers actor Ben Johnson was likewise nominated for The Last Picture Show. When transportation from Durango to Hollywood was hard to arrange, Wayne lent them his private plane. Johnson won; Ann-Margret lost to Johnson’s Last Picture Show costar Cloris Leachman. When they returned, Ann-Margret remembers, “I don’t know what Mr. Wayne said to Ben, but he got me in a corner, and he just said some wonderful things to me.”

John Wayne once even filled in for her as a guest on The Tonight Show when she was too ill to go on. She and John Wayne remained close friends for the rest of his life.

Ann-Margret, who would be nominated for an Oscar again, for Tommy, turned 80 this year. She’s still acting and is currently starring with Ellen Burstyn and James Caan in Queen Bees, a sort of Mean Girls in a retirement home.