Ex-lawman Jess Carlin left his town in disgrace and moved to Mexico after being framed for crimes he didn’t commit. But when his brother dies under suspicious circumstances, Carlin heads north of the border – vowing to find his brother’s killer.

Stars Audie Murphy and Broderick Crawford! In this classic Western, a former sheriff comes out of retirement to hunt down his brother’s killer.

After Deputy Jess Carlin is framed for crimes he did not commit, this Texas native takes refuge in Mexico with his girlfriend. He earns a living finding fugitive American criminals in Mexico and turning them over to the American authorities. 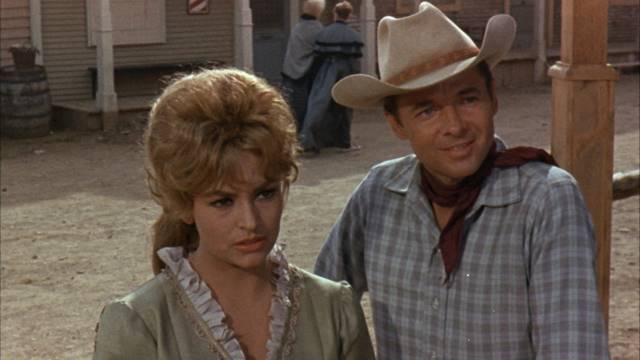 It’s a simple, uneventful life, but Jess Carlin is satisfied enough with it to stay right there. That is, until he learns that his brother – a peaceful newspaperman – was killed in a gunfight.

Knowing that his brother never even carried a gun, Carlin realizes that his brother was most likely murdered. Without much concern over his own safety, he heads north of the border, intent on avenging his brother’s death.

But there are dangers ahead: bounty hunters are on his trail, and he must fight to the death to remain free. When he finally makes it to the lawless Old West town of Rimrock where his brother, Roy, was killed, Carlin knows his troubles are about to get worse. That’s because he will soon come face to face with Luke Starr: the corrupt Saloon owner who runs the town – and framed Jess in the first place!

Soon, Jess digs deeper and deeper into the details of his brother’s death. He learns that his brother wrote a scathing expose on Starr, detailing all the crimes and crooked deals he participated in. Jess also learns that, once Roy was gone, Starr was able to get the newspaper shut down.

For his part, Starr is determined to have Jess killed. Although repeatedly ambushed by his men, Carlin always manages to slip away. In his heart, he knows that Starr is responsible for Roy’s death.

But this lawman also knows that thinking something is true doesn’t hold water in a court of law. Will he find the evidence he needs to bring Luke Starr to justice – or will Luke Starr and his men kill him first?