Rancher McLintock has his troubles—corruption, Indians, gunfights and, most frightening, the return of his ex-wife.

John Wayne rustles up the laughs in this classic Western comedy! George Washington McLintock, “GW” to friends, enemies and just about everyone else, should be happy. After all, he’s rich, owns a mine, a lumber mill and the largest cattle ranch in the territory. Living the single life, he can stay out late whenever he wants. But GW has a whole passel of troubles. 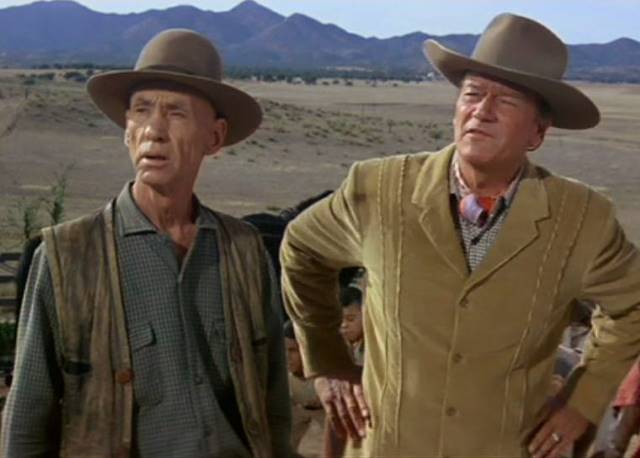 For one, he’s starting to feel his age, as the sons of his equally-aging buddies push for change. Then there are the homesteaders arriving in droves with dreams of making it rich as farmers, though the land available is barely suitable for cattle to graze. Corrupt and inept government officials abound and to make things worse, they are now trying to ship the Indians, many of whom are GW’s respected friends, to a reservation. Then there’s the matter of the wife, or rather, almost ex-wife. Katherine had left GW, for no apparent reason, several years before. Now she’s back, and she wants a divorce and custody of Becky, their seventeen-year-old daughter. Katherine and Becky couldn’t be more different than GW. They travel in some highfalutin circles back east, and both share a serious dislike of anything “west.”

In the meantime, GW hires a new cook and she brings her grown son Dev, a strapping young man, who starts working for GW as a ranch hand. When Dev sets eyes on Becky, sparks fly and the attraction is mutual, never mind that she’s brought a beau back from school. With Katherine’s return, it seems GW has caught the romance bug, as well.

Now, GW really has his hands full. Can he win his high-society wife’s heart back while dealing with slippery bureaucrats, getting into brawls, gunfights and an Indian attack?