Sean Mercer leads a crew capturing animals in Africa for a zoo. But his scariest challenge is keeping a beautiful wildlife photographer from capturing his heart.

Starring John Wayne, Elsa Martinelli, and Red Buttons. Stunning landscapes, thrilling chases, and spectacular animals abound in this action-adventure movie that finds the Duke hunting for wildlife in Africa…and running away from love. 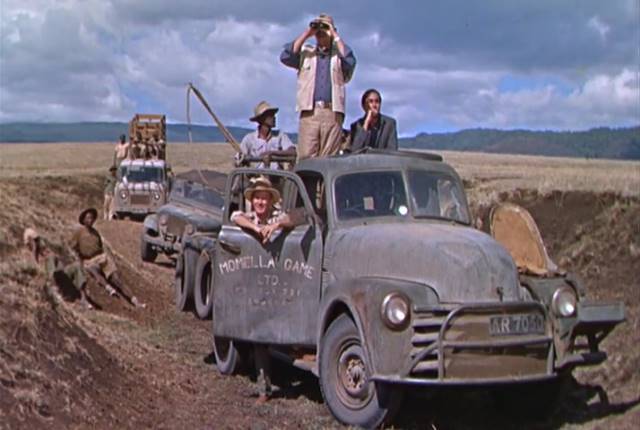 In Tanganyika, a gruff Irish American named Sean Mercer works for the Momella Game Company, capturing wild animals to sell to zoos and circuses. The owner of the company, Brandy de la Court, has taken over her father’s business following his death. Sean is the crew master supervising Kurt, a former race car driver from Germany who drives the herding jeep; Little Wolf (known as “The Indian”) a Native American sharpshooter; Luis, a Mexican bullfighter; and Pockets, an ex-cabbie from New York City.

One day while Kurt and The Indian try to catch a rhinoceros, the rhino gores The Indian in the leg. The crew takes him on a 5-hour journey to Aurusha, the site of the nearest hospital. Then, they leave him behind to recuperate.

When they get back to camp, a wildlife photographer is waiting for them. Anna Maria “Dallas” D’Alessandro has been sent by the Basel Zoo, the company’s biggest client. She wants to photograph the men on their hunt, and even though Sean resists, they must bring her.

On her first day, Dallas makes lots of silly mistakes. But when they capture a giraffe, she is delighted. Afterwards, she thanks them for bringing her but says she won’t come along anymore if they don’t want her there. Everyone in the group—except for Sean—votes to let her stay.

It’s not that Sean doesn’t like her. He’s had his heart broken before and he doesn’t want to give anyone—even someone as beautiful and smart as Dallas—the chance to break it again.

Meanwhile, a sharpshooter, Chips, joins the crew while The Indian is on the mend. Soon enough, romantic feelings cause trouble as Chips, Kurt and Pockets start vying for the owner, Brandy’s attention.

Despite Sean’s gruff demeanor, it’s clear that he and Dallas have real feelings for each other. But when Dallas sidetracks the crew to tend to orphaned elephant calves, Sean is infuriated; there are a lot of animals left to hunt and catch—who has time for this?

But the real question is: will Sean let Dallas capture his heart…or will he drive her away?