A wounded gunman falls in love with the Quaker girl who nurses him back to health. Now, outlaws have caught up with him. Will he choose violence or love?

A rare colorized version of this 1947 John Wayne classic!

Wounded, notorious gunman Quirt Evans gallops onto a farm owned by the Worth family, and promptly collapses on the ground. 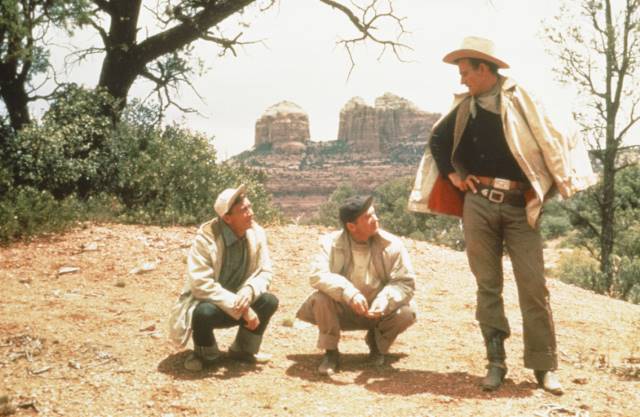 Thomas Worth, his wife, son, Johnny, and grown daughter, Penelope, are Quakers. They live a simple life, practicing compassion and non-violence. Against the advice of the doctor, who warns the family to rid themselves of the outlaw, Thomas decides they will nurse the ailing stranger back to health. Though in great pain, Quirt is desperate to get to town so he can wire a land claim. He asks Thomas to drive him, and he complies. As soon as they get back to the farm, Quirt loses consciousness raving about past loves in his delirium. Penny is by his side through his fevered rants, fascinated as he reveals dark snippets of his life.

Over the next few days, Quirt regains consciousness, and becomes more and more smitten with Penny who continues to tend his wounds. Penny explains their family’s beliefs, especially their commitment to non-violence. It’s clear the unlikely pair is falling deeply in love. But their idyllic state will not last.

While in town, Johnny hears that Hondo and Laredo, two of Quirt’s despicable associates are looking for him. They want his land and they’re gunning for a fight.

As Quirt contemplates a second chance at life, a skirmish with Hondo and Laredo puts his beloved Penny in a life and death situation. Quirt’s first instinct is revenge. He heads to town, gun holstered and loaded, but will he use it?