From Magnum P.I. to Blue Bloods and Beyond!

Thomas William Selleck was born on January 29, 1945, in Detroit, Michigan to Martha and Robert Dean Selleck. In 1948, when Tom was 3 years old, his family moved to Sherman Oaks, California.

As a young man, he went to the University of Southern California on a collegiate scholarship where he played basketball. At 6’4” tall, he was a successful athlete pursuing a business degree and he also did some modeling. With his chiseled good looks, athleticism, and intelligence, a drama teacher suggested that he give acting a try. Soon after, he quit the University and became an actor, studying at the Beverly Hills Playhouse.

Tom In Hollywood and the National Guard

Throughout the late 60s and 70s, Tom took acting jobs in commercials for soda, cigarettes, and deodorants. In 1965 and 1967, he also appeared on The Dating Game as one of the bachelor contestants.

Since this was the Viet Nam era, Tom soon got his draft notice. As a result, he joined the California National Guard and served in their 160th Infantry Regiment from 1967-1973. In 1971, he married model Jacqueline Ray and adopted her son, Kevin Shepherd. Their marriage lasted until 1982.

Selleck began getting small parts in movies such as Myra Breckinridge, as well as parts in popular television shows including Mannix, Marcus Welby, M.D., The F.B.I., The Streets of San Francisco, Charlie’s Angels, and Taxi. His recurring role as a naïve P.I. in The Rockford Files led Selleck to find a mentor and lifelong friend in the show’s star, James Garner.

In 1979, Selleck won leading man roles in The Sacketts (opposite Sam Elliot and Jeff Osterhage, as well as Western movie legends Glenn Ford and Ben Johnson).

After over a decade of commercials and guest appearances on other people’s shows, Tom Selleck finally got his big break. In 1980, he won the part of Thomas Magnum in the new series, Magnum P.I. But it came at a cost; although he was offered the part of Indiana Jones in The Raiders of The Lost Arc, his producers would not release him to play that part, so it ended up going to Harrison Ford.

However, with a popular run that lasted 8 years and garnered an Emmy for Selleck, he had no regrets. Selleck said that “Magnum was the best thing” that ever happened to him.

In 1987, he married Jillie Joan Mack and in 1988, they had a daughter, Hannah, together. Selleck and his family live on a 60-acre avocado ranch (once owned by Dean Martin) in Hidden Valley, California. Selleck loves the outdoors and spends a lot of his time fixing roads and clearing brush on his ranch.

As Magnum, P.I. was winding down, Selleck was cast in Three Men and a Baby – the biggest box office hit of 1987. He went on to star in the sequel, Three Men and a Little Lady, which was also a hit.

In the 1990s, Selleck appeared in films such as Quigley Down Under, Her Alibi, An Innocent Man, Mr. Baseball, In & Out, and The Love Letter. He also got cast as Monica Geller’s love interest in the hit TV show, Friends, for which he received an Emmy nomination for Outstanding Guest Actor in a Comedy Series.

In 1998, Tom was excited to star in a new sitcom called The Closer. The cast included Ed Asner, David Krumholtz, and Penelope Anne Miller. But despite looking like a clear winner on paper, the show never caught on and it was quickly cancelled. 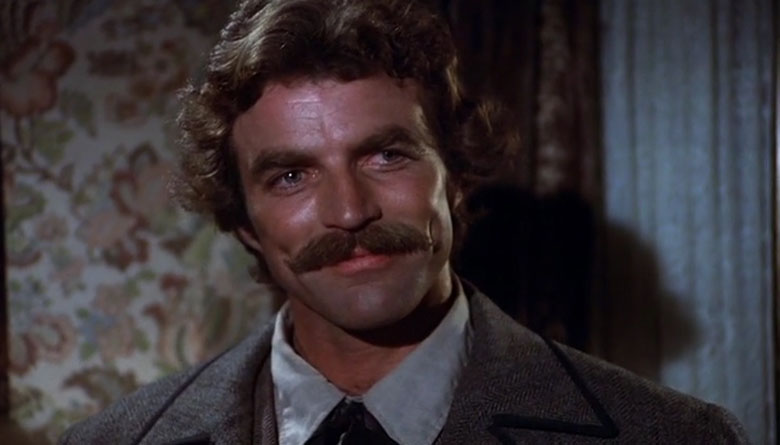 In the early 2000s, he played in two more cowboy films, Crossfire Trail (based on the Louis L’Amour novel) and Monte Walsh. Next, Tom Selleck went to Broadway to reprise a role formerly held by Jason Robards in A Thousand Clowns. It was not a commercial or critical success and closed after just two months.

But Selleck returned with a critically acclaimed performance as Dwight D. Eisenhower in Ike: Countdown to D-Day. The critics enjoyed his portrayal of Eisenhower as a cool, calm, and collected leader.

For 12 seasons and counting, Selleck has starred in Blue Bloods. He’s also starred in (and produced some) episodes of the beloved “Jesse Stone” TV movies.

Cowboy, Lawman, P.I. or U.S. General – no matter what role Tom Selleck takes on, his strength, intelligence, and humanity always shines through. No wonder his fans still adore him!

Check out Tom Selleck movies on INSP. Click here for schedule and details.

How many mustaches did you count?
If you counted 32 mustaches, you are correct!