Host Jill Wagner travels the country on a quest to find talented craftsmen who still make incredible items by hand. She starts in Omaha, Nebraska, with 4th generation shoemaker, Jeff Ketzler. His family has a rich tradition of crafting quality footwear, with clients like Ronald Regan and our first astronauts. Then, in Charleston, South Carolina, Jill is with a young potter named Christian Royal, who uses greenery found in his garden to make unique stoneware. Finally, in Santa Barbara, California, Tanya Holroyd and Dave Polarek show Jill how they recreate Spanish-style lanterns that are hundreds of years old from photographs. 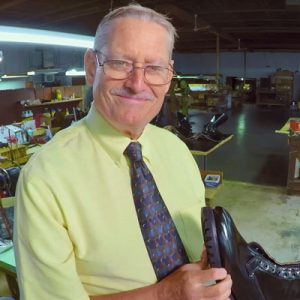 What can cops, bikers, astronauts, movie stars and equestrians possibly all agree on? Boots: Quality, handmade boots by The Dehner Company. Family-owned, with a history that dates back to 1800s, Dehner is headed up by company president, Jeff Ketzler, now the fourth generation to take the reins.

Carlton Dehner started the company in 1875. Business was bustling, as he and his partners supplied custom boots to cavalry officers. After a couple of moves due to expansion, one founding partner passed away, and Carlton decided to buy out his other partner, and relocate from Wichita, Kansas to Omaha, Nebraska, taking several employees, and his new partner, son-in-law, Harold Ketzler. After expanding, yet again, Carlton died, and Harold Ketzler took full control of the company, followed by Donovan “Van” Ketzler, and today, Jeff, each with his distinctive leadership style.

While some shoe manufacturers have altered their practices to increase output and cut costs, Jeff stays true to the methods, machinery and craftsmanship that garnered praise for Dehner boots and shoes for over a century. Artisans cut and shape leather with decades-old hand tools, and the machinery used to sew leather uppers to soles would qualify as antiques. Indeed, a walk through the factory is like a walk back in time. But the dedication to craft shows in the product. Long known to those who participate in equestrian sports, the Dehner name carries with it a legacy of quality, comfort and practicality.

Famous past customers include Ronald Reagan, Gen. George Patton, Jacqueline Kennedy Onassis and Dwight Eisenhower—even James Dean and Brad Pitt ordered boots to wear in respective movies. Dehner also supplies boots for numerous law enforcement agencies, branches of the military, and has made boots for astronauts starting in the early years of NASA through the beginning of the space shuttle program. 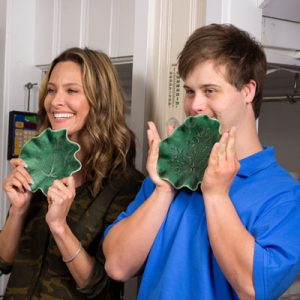 Christian Royal was born with Down Syndrome and thankfully, his parents, Mike and Helen, did not listen to the experts who told them their son would never be able to learn, never become educated. Instead they took another path, exposing him to many activities in their homeschooling lessons. When Christian was a teen, one of those activities was pottery, and Christian was not only enthralled, he showed real talent. The ability and opportunity to create one-of-a-kind, beautiful pieces of functional art is a gift for any artisan, and for Christian, in addition to self-expression, the act of creating gives him confidence, self-worth, purpose, a sense of place in the community, and above all, a thriving business.

Now in his mid-twenties, Christian is unable to communicate, except with single, simple words. Arithmetic and a sense of time do not exist in his world. But one look at his charming, yet intricate, designs and words, nor math are not necessary to know the heart of the artist.

Christian’s work is featured in several galleries, markets and shops in Charleston and throughout South Carolina Lowcountry, and purchased by customers across the nation.

In a 2013 SheKnows article, Helen says of her son, “He has his own gift of noticing beauty everywhere and reflecting that beauty in his artwork.” 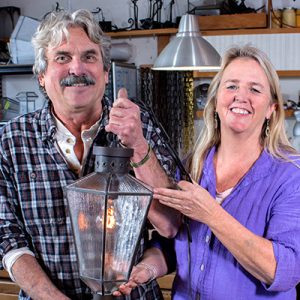 Raised in London and having architects for parents, it’s no surprise Tanya Holroyd Stevenson spent her youth exploring historic buildings in England and Europe. Later in life, she traveled to the US to study Art History at the University of California at Santa Barbara. After graduation, Tanya worked with architects in the Santa Barbara area, shooting photos and drafting.

Dave Polarek studied fine art and printmaking at the University of the Pacific and the University of California at Santa Barbara, after which he enjoyed a 20-year career as an illustrator and graphic designer.

In 2001, Tanya partnered with Dave to found Holroyd Studios, and each brought their love of vintage and historic design to the drawing table. Today, their craftsmanship can be found in custom houses and commercial buildings throughout Southern California, across the country and overseas. The studio features timeless and traditional designs, re-creating the classic, old-world charm of Europe, styles found in palaces and villas of 17th through 19th century Spain and Italy.

Tanya’s and Dave’s unique Spanish-style lanterns set the studio apart with their carefully handcrafted method of hammering and pressing the copper sheet metal into ornamental shapes and decorative patterns.

The team’s work has been featured in Architectural Digest, Town & Country, and California Homes, among other publications.